The Way She Was: Barbra Streisand’s March Through History 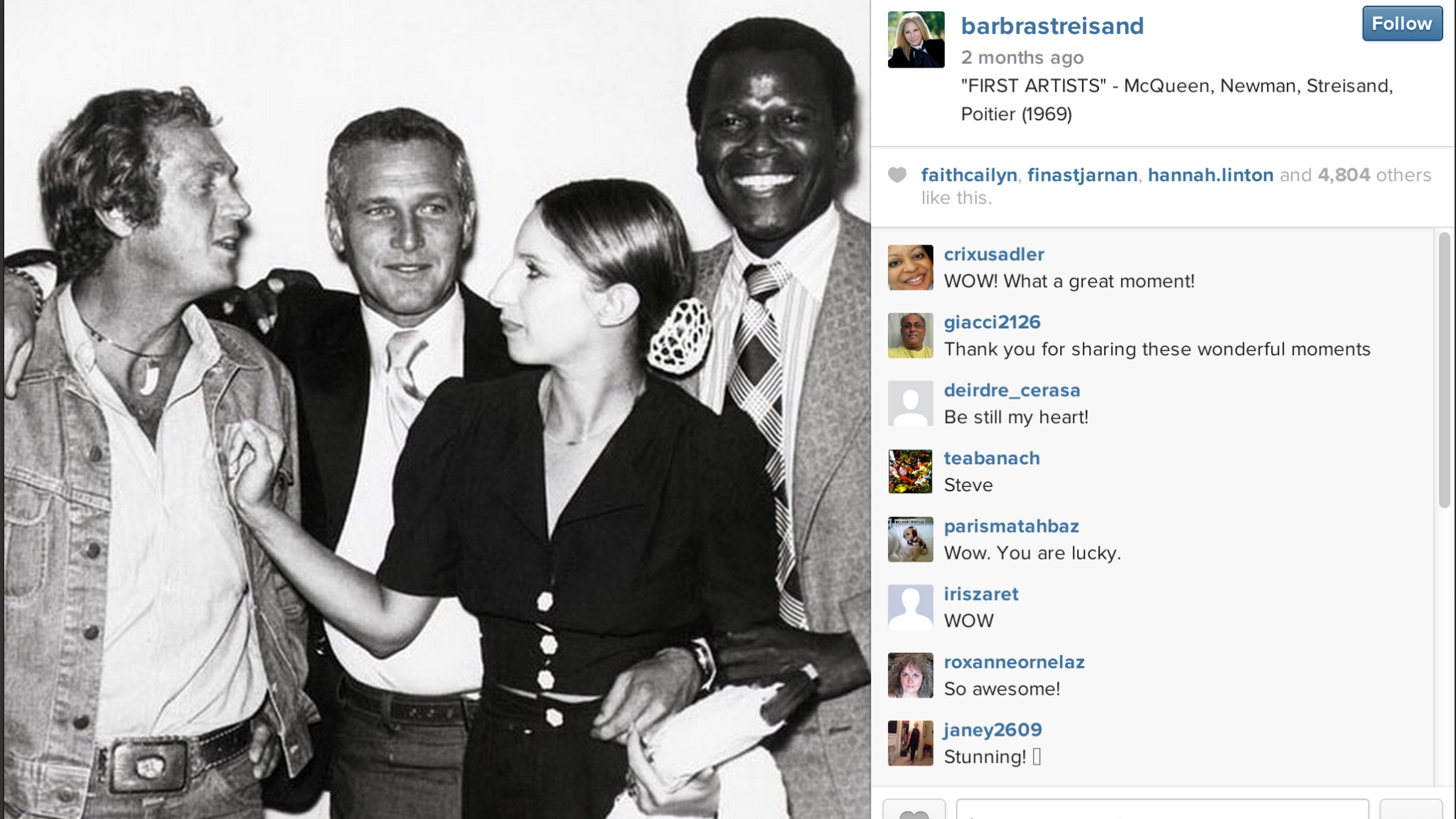 Barbra Streisand’s new duets album, Partners, has just become her 31st album to go platinum, making her the female performer with by far the most platinum albums in RIAA history. Partners was quietly the seventh-biggest-selling album of last year. It’s Streisand’s 34th album, and it features the singer laying down her buttery vocals on a series of duets with male artists from across music history: Stevie Wonder, John Mayer, John Legend, Michael Bublé. She remakes her duet with Kris Kristofferson, “Lost Inside of You,” with Babyface. There’s even a duet between Barbra and Elvis, who overcame death so that we might hear how his voice sounds with hers. It’s an adult-contemporary blockbuster, with the romantic instrumental arrangements to match.

You would think that by now she would just let the albums sell themselves, but, like a certain other musical legend, Streisand has taken to Instagram to promote it. Whereas Madonna’s social media presence shows how the Material Girl can’t quite seem to master immaterial spaces, though, Streisand makes it look effortless. Her Instagram account is a smooth, glossy affair, just like the singer herself. Just as nearly every album Streisand makes now is a kind of monument to her career, Streisand’s Instagram is a catalogue of her many varied achievements, and every day is Throwback Thursday.

A stroll through her Instagram is a stroll through 53 years of pop culture. Barbra was the Zelig who observed it all. Since starting the account six months ago with a posed photo of herself in a wicker chair with her dog Samantha, she’s taken us on a whirlwind tour of her life and the 20th century. Here she is with some Beatles, meeting JFK, getting kissed by Groucho, singing with Judy Garland, posing with Mick Jagger and Meryl Streep. There’s even a picture of Streisand and Taylor Swift, a sisterhood of high-sellers, captioned “Chart toppers!” If someone became famous after 1962, Barbra has met them.

Here is what else you will find on Barbra Streisand’s Instagram account: a picture of young Babs signing her first contract in 1962 with Columbia Records, to remind you this is a person who has maintained a multiplatinum career in a notoriously fickle field for more than half a century. A picture of Babs throwing her head back in delight while listening to playback sessions with Kenny “Babyface” Edmonds and sound engineers. A selfie from 2002 of Babs and Barry Manilow captioned “Hey look — Two kids from Brooklyn! Barry is such a doll. #tbt #2002.” A luminous vintage photo of Barbra wearing a lavender chiffon dress with a matching cape and headband while rehearsing in 1967 for A Happening in Central Park. A birthday photo with her son, Jason, who looks a lot like his father, Elliott Gould. A shot of Barbra meeting Princess Diana. Backstage at the MGM Grand with Michael Jackson. There’s even a shot of Madonna visiting Barbra on the shot of Nuts in 1987, as well as a shot of the Nuts soundtrack captioned “It was a thrilling challenge to compose 13 minutes & 11 seconds of instrumental score for the soundtrack to #Nuts. #1987 #TBT.” (I like how she is subtly encouraging a critical reappraisal of Nuts with all of these #Nuts posts.) More pictures of Barbra with various collaborators like Quincy Jones and Diana Krall. There is a gorgeous 1969 photo of Barbra and the other “FIRST ARTISTS,” Sidney Poitier, Steve McQueen, and Paul Newman, with whom she formed a star-driven production company that made movies like A Star Is Born (Streisand), Uptown Saturday Night (Poitier), and The Life and Times of Judge Roy Bean (Newman). There are also pictures of her admittedly very cute dogs.

Meeting Diana, Princess of Wales – at the London premiere for “Prince Of Tides” – February 18, 1992.

One of the reasons it probably feels like Barbra, unlike Madonna, isn’t trying too hard is that she may not be trying at all. Barbra probably doesn’t run her own account. She never posts anything candid or personal, although in the beginning she posted more photos of flowers from her garden. A lot of the photos are mysteriously captioned in the third person as “Barbra does [X]!” Everything is a professional photograph shot through a flattering gauze in perfect light. She is more like Beyoncé in this respect than any other contemporary singer. There are no shots of, say, James Brolin in his underwear brushing his teeth. She has always maintained a kind of removed, regal distance from her fans — a very old-school technique, which in Barbra’s case still proves effective. They can have everything she’s ever put down on wax, but they can’t have the real private Babs. That is just for her.

My favorite photo is of a “Thank You” cake she received made to look like a floral ottoman stacked with pillows with one gold high heel on top. She captioned it “The most beautiful cake I’ve ever seen.” It was so weird that I had to wonder: Was this possibly the real Barbra speaking to us? As a notoriously private person, Barbra Streisand will probably never take us to the door of her Malibu basement that she turned into a 1900s shopping square à la Hello, Dolly! which houses a DOLL STORE. And yet I will continue to follow her Instagram account forever in the hopes that one day, she just might.

The most beautiful cake I've ever seen.