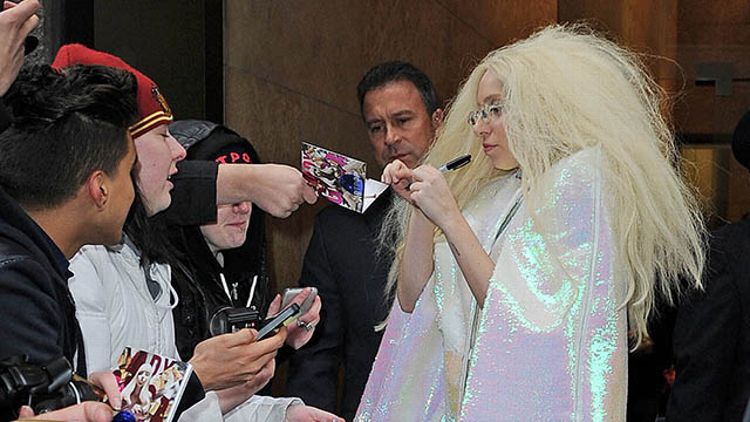 You know the saying that when somebody shows you who they are, believe them? Maybe an artist’s singles really do predict what the album will be like. Miley Cyrus’s first two singles were all over the place, and Bangerz followed suit. Katy Perry’s Prism A-sides were safe and dark, respectively, and the album oscillates between uplifting and introspective. Lady Gaga released a bunch of scattershot singles that made it hard to imagine how her album would add up, and now we have Artpop to connect the dots. As Gaga’s third official album, it’s neither as lightheartedly catchy as The Fame nor as pompously preachy as Born This Way. On Artpop, Gaga doubles down on what made her a star in the first place: personality, theatrics, and big hooks you can hang weird hats on.

As always, Gaga uses a Broadway vibrato you will either love or find repulsive, probably depending on how you feel about Liza Minnelli. It’s not always as exaggerated as it is on “Applause,” but it’s definitely present throughout. Gaga goes more nasal and guttural on this album than ever before, and it’s a matter of personal taste. I liked it. She leans into the imperfections in her voice — a rarity for a pop star of her stature, but that’s why pop culture’s in art in her. Gaga’s insistence that Artpop is about something doesn’t even grate on me, because of course it’s about something. We all agree that albums can be works of art, right? So why does pop music often get shunted aside, as if it doesn’t belong on the same plane as rock and rap and electronic music? Genreism is a vestige of the past.

Gaga establishes her serious music credentials in the second song, “Venus,” which interpolates a song by cosmic jazz legend Sun Ra. “Venus” samples a Zombie Zombie cover of “Rocket Number Nine Take Off for the Planet Venus” and takes that song’s title (and only lyrics) for its first line. Sun Ra was a visionary, an outsider, and a true weirdo genius, and it’s certainly ballsy (eggsy?) of Gaga to draw the comparison. She spends the rest of the album trying to live up to her own astro-celestial ambitions, to varying results. “Venus” is a Gary Numan–style stomper with shades of the B-52s that sounds ready-made to be played at ’80s club nights alongside Soft Cell’s “Sex Dwarf.” Artpop never quite ascends to the levels of weirdness and abstraction promised by “Venus,” but the album mostly coheres and cements Gaga as a career artist for the billionth time in her fairly young career.

The first track, “Aura,” wisely changed its name from “Burqa,” but perhaps less wisely kept its controversial climactic lyric about seeing “behind the burqa” of the costumed pop star. “G.U.Y.” flips gender roles on their back with a spoken new-age intro that digitizes into an acid-soaked muscular bop produced by Zedd, the Russian German electro-house wunderkind. “Sexxx Dreams” has hollow drums on the verses slinking into a chorus of ethereal synths reminiscent of the sophisticated erotic funk of Prince songs like “Head.” On the title track, “Artpop,” Gaga does karaoke Debbie Harry over a dial-up Internet beat. “Swine” is pastel industrial, with Gaga the nine-inch nail artist reading an enemy to filth at the salon. “Donatella” is a definite low point, but Gaga sings the word “boulangerie” on it, and that was enough for me to give it a pass. Even the worst songs on the album have their moments, and I fear/anticipate that some/all of them will grow on me.

“Jewels N’ Drugs” with T.I., Twista, and Too $hort is a trap pastiche, and its faux–Maybach Music sound already sounds a few years too dated. The rap guest spots are the focus of the song, with Gaga singing the hook, one verse, and a bridge containing the very memorable pop phrase “slap honey on your pancake.” T.I. and Twista both seem like they’ll do anything that pays them, and T.I. is still on probation for cosigning the terrible Iggy Azalea. I kind of wish she’d opted out of the posse cut and just used Too $hort. How do Gaga’s rapper features compare to Juicy J’s verse on Katy Perry’s “Dark Horse”? Well, Juicy J strays slightly out of his comfort zone and raps about Jeffrey Dahmer, Sleeping Beauty, and turning the bedroom into a fair. Because it is Juicy J, I cannot help but see the fair as the evil carnival from Something Wicked This Way Comes. Once horrorcore, always a little bit horrorcore. On the other hand, Too $hort, easily the best of Gaga’s trio, has the great Too $hortism “It’s good pussy in the passenger seat.” Let’s call it a draw. If you want to blame anyone for making the pop-rap-verse thing happen, feel free to blame Kanye for doing that weird murderer-abductor guest verse on Perry’s “E.T.”

Gaga is the only woman on her own album. Every song has male cowriters and the guest spots are filled by male rappers and R. Kelly. Azealia Banks was cut from “Venus” after bragging about it online, and Banks was understandably salty about having her red carpet yanked out from underneath her. “Fashion!” sounds like an Italo-disco cover of an imaginary David Bowie song (but not Bowie’s “Fashion”). It’s Gaga’s droll delivery that sells the glam-rock aspect of the song, which is coproduced by David Guetta and Will.I.Am, whose ham-fisted piano house helps Gaga sell the Meatloaf. It’s around this point that the album’s breakdowns start to blend together. There’s nothing as memorable as Clarence Clemons’s sax solo on “The Edge of Glory.” That’s not a pro-analog stance; Artpop just uses a lot of similar-sounding white European dudes as its producers.

As for the lyrics, they are silly. But I preferred them instantly to the generic platitudes of Perry’s Prism, because Gaga’s imagery is specific and also goofy as hell. Garden panties? Check. Russian hookers? Check. “Voodoo, Voodoo, Voo-Don-Na-Na”? Sure. French nu-disco and house producer Hugo Leclerq, who goes professionally by Madeon, is responsible for several of the album’s highlights. Piano ballad “Dope,” produced by Rick Rubin, is a low-key rocker about Gaga’s hip surgery (and the subsequent painkillers) that sees Gaga as Bon Jovi with a dash of Kim Carnes and a big dose of Alice Cooper’s “Only Women Bleed.” “Do What U Want” with R. Kelly is another highlight and probably the album’s most direct hit. “Gypsy” smacks of ’80s AOR like Bonnie Tyler’s “Total Eclipse of the Heart” in the best possible way, like it could fit right in on the Flashdance soundtrack. By the end of Artpop you feel exhausted, but in a good way. It’s exhilarating rather than just draining. As a palate cleanser, here’s a GIF of Gaga performing dressed like Kenny’s pet robot from this season of Eastbound & Down.

Gaga was on “The Howard Stern Show” the other day, and she criticized the music industry for its desire to manufacture songs that will be immediate hits instead of cultivating artists whose fan bases will be loyal for decades. Gaga might go overboard on her cult leader shtick sometimes, but her intentions are mostly good. Stefani Germanotta morphed into Lady Gaga at an age when most people are still constructing their adult identities without the aid of a pseudonym. Gaga is only 27, and she seems to be having fun again with the wigs and weird aliases, when it had begun to seem almost stifling by the end of the Born This Way promo cycle. The “Applause” flop sweat, the obvious but probably appropriate Jeff Koons sculpture on the album cover, the smell of wig glue and makeup remover that pervades everything Gaga does; it’s all part of her ramshackle charm. She never clings to one idea so hard that she throttles it, and she has a talent for self-editing. She can be overwhelming, the way anyone with a big personality, talent, and penchant for talking out of turn can be. But she’s learning to better control the streams.

Gaga wants to be all things to all people, but in a different way than Katy Perry does. Katy, like Madonna, wants to be every type of desirable woman at once. Gaga, also like Madonna, wants to be every kind of artist simultaneously. She wants to be the biggest pop artist in the world, and also a cult favorite who gets the critical respect reserved for real musicians. Most pop stars tend to age themselves down; think of Katy’s pigtails or Miley’s adult-baby fetish onesies. But Gaga loves to age herself up, playing a variety of kooky ladies of indeterminate age, getting into Advanced Style early. She plays weirdos more believably and comfortably than sexpots, but her range of roles covers a lot of ground. Lately she’s been doing a bleach-blonde-with-dreadlocks look, making her resemble an extra from the third Matrix movie. The main agenda of Gaga’s art project of the self is to sell more Gaga, as a record and a brand, but occasionally a real idea about the nature of beauty, constructed identity, and commodity slips through. It helps sometimes to sell a serious message if you can dance to it too.