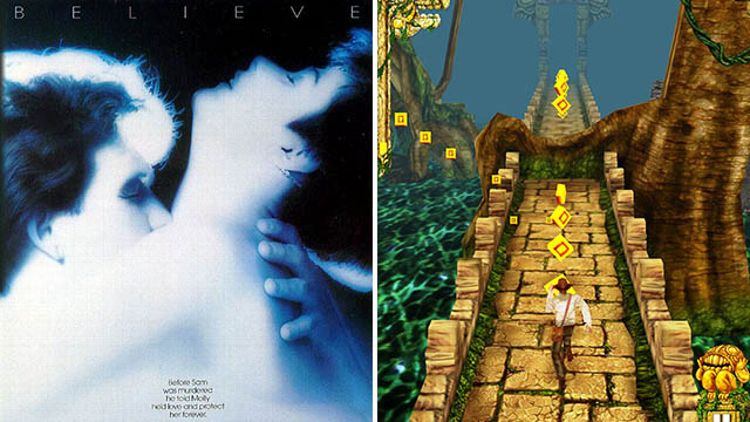 Maybe there are only so many stories to be told, and maybe the stories we know well are more likely to get press coverage because we recognize them as being familiar, but this is getting ridiculous. It’s not always good to recycle. Sometimes recycling, both with cans and with ideas, creates the illusion of progress or productivity without actually doing anything. It’s not always bad — yesterday, I was feeling optimistic about the Princess Bride musical — but today’s news really is bad. I’ll give you what you might find to be the easier-to-swallow story first: Paramount Television is developing a show based on Ghost. OK, now it gets a little stickier: Temple Run, a popular mobile game with a strong resemblance to Indiana Jones that involves running, running, and more running away from demonic monkeys, is being turned into a movie.

Ghost’s adaptation makes me nervous. I care. Though the movie was, in retrospect, perhaps less than worthy of winning an Oscar for Best Original Screenplay in 1990, it tricked us all into thinking it was, if only for a moment (don’t you dare refuse to take partial responsibility for Ghost being the highest-grossing film that year). It was charming, it was ridiculous, and it had the hallucinatory effect of making you see Vincent Schiavelli in every face in your subway car. You had some tender moments with Ghost — it was peak Swayze period, three years after Dirty Dancing — but thinking about the connection you had over that slippery, dung-colored lump of wet clay is best saved for moments of private reflection.

Or maybe not. You may have seen Ghost the Musical, though I didn’t, and though you bore witness to a “rapping ghost,” perhaps you ultimately found the whole thing “flavorless and lacking in dramatic vitality,” as the New York Times did. But it’s more likely that you didn’t see it, because Ghost is not a movie most people revisit often outside the confines of their own minds. That’s exactly why it’s not a bad movie — it’s earned its place in history — but that’s also why it seems like a strange item to revive. Jeff Pinkner (Fringe, Lost, Alias) and Akiva Goldsman (A Beautiful Mind, Batman & Robin) have been assigned with cowriting the pilot, but somehow that doesn’t make the revamp any more appetizing. A chorus of NO!s and WHY?!s chimed in immediately in the comments when the news broke, everyone saying what amounted to the same thing: Please give us something new and original, please don’t be so transparent about trying to capitalize on our emotional connection to an ancient artifact, please oh please let it just rest in peace.

Temple Run evokes a less sentimental response. It never made you cry, or laugh, or do anything other than swipe your thumb repetitively for hours, sometimes while sweating. The game had the ability to eat a good portion of your day and cramp your fingers, which meant that you didn’t mind spending money on digitized coins or when it promoted movies (Brave, Oz the Great and Powerful) with its own special editions. It’s compulsively playable and popular because of its simplicity. The announcement of another app-to-film development, the Angry Birds movie, drew hmms of consternation mostly because of its four-year production schedule: While there are certainly people, many of them still drinking from sippy cups, who would see the story of what made the birds so angry today, it’s less likely to capture the same crowd in 2016. But Temple Run itself drew its inspiration from a beloved movie, so now we’re running in spin-off circles. Despite the vast emptiness of its premise, Temple Run: The Movie has managed to bolster itself with David Heyman (Gravity, Harry Potter) as its producer (no writer has been hired yet). That vote of confidence is at odds with what we feel in our bones to be true, that there are still things we haven’t seen that we’d be willing to invest our time and money in. It’s disappointing, like receiving an unflattering caricature of yourself from a street vendor and having to acknowledge your worst features in the scribbles. These reproductions aren’t what you want, but it’s what you’re going to get: the touch for which someone thinks you hunger.

MMLP2 Is Eminem's Seventh No. 1 Album