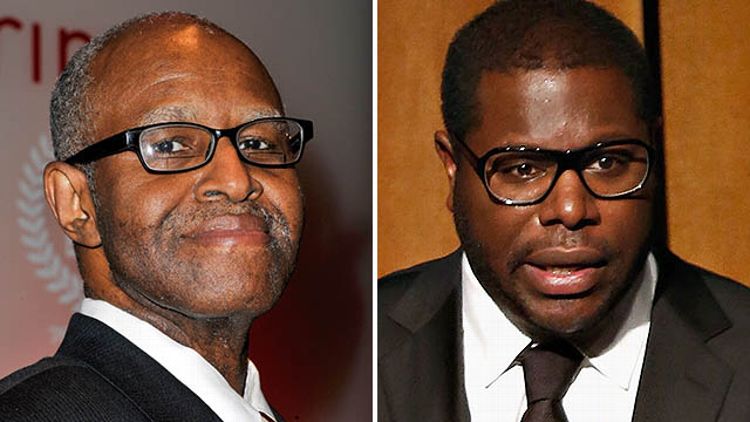 Last night, at the New York Film Critics Circle Awards, 12 Years a Slave director Steve McQueen was heckled by CityArts critic and famed contrarian Armond White. According to Variety, as McQueen was accepting an award from Harry Belafonte, White yelled out from the back of the room: “You’re an embarrassing doorman and garbage man. Fuck you. Kiss my ass.” Then, as McQueen thanked the Critics Circle, White let loose with a “puhlease.” Huh. OK. What?

If “movie-critic-community infighting” isn’t really your bag, you’ve probably never heard of Armond White. A quick recap, then: White has achieved a certain kind of insular infamy over the last few decades, thanks mostly to the fact that he’s panned, oh, roughly every single movie you’ve ever loved while simultaneously, and with all apparent earnestness, praising stuff like Norbit. His annual “Better-Than” lists are good for an excellently mind-boggling coupling or two every year. In 2012, he reached a significant career highlight, arguing that Zero Dark Thirty paled in comparison to Ghost Rider: Spirit of Vengeance. It has made him both a kind of plucky rebel figure, an outspoken firebrand standing proudly in resistance to crowd-mind compliance, and something of a joke. I mean, look, I appreciate latter-day Nicolas Cage as much as anyone. I saw Ghost Rider: Spirit of Vengeance in the theaters, and I went in with high hopes. And even fire pee couldn’t save that thing.

In general, it all adds up to an entertaining enough spectacle, White’s antiestablishmentarianism reading like amusing grouchiness. In 2011, when White was the chairman of the NYFCC, he got the opportunity to grumble about the movies he didn’t like while hosting the awards show. Here’s a crucial bit, from Vulture’s recap of the event:

Later, he introduced Michelle Williams … and then complimented Williams for an … older credit, 2004’s Land of Plenty; it seemed like a deliberate snub of her current role in Blue Valentine. Said Williams upon taking the stage, “Um, thanks, that was, like, ten years ago. I’m not going to read any of your reviews of my other work because you really had to reach.” The final award was Best Picture, which went to The Social Network, another film White didn’t like. He said of presenter Tony Kushner (whom he referred to simply as “Kushner”), “Surely, Kushner, whose great play, Angels in America, showed how spiritual and social connections transformed lust and envy to family, friends, and country, has a moral responsibility to explain why The Social Network is good.”

Rawer was his spat with beloved ex–Village Voice critic J. Hoberman. It’s kind of a long story (again: “movie-critic-community infighting”), but basically: Word was, White had once basically suggested, in writing, that Noah Baumbach’s mother, Georgia Brown, another former Village Voice movie critic, should have aborted her son. It was the kind of thing mentioned often when writing of White’s antics, but because it was so ridiculous, many had taken it to be some kind of urban legend. Turns out: Nope! Hoberman found the source, White’s review of Baumbach’s Mr. Jealousy, and posted the review online under the headline: “Proof That Critic Armond White Did Call for Noah Baumbach’s Abortion.” The line in question, quite plainly: “I won’t comment on Baumbach’s deliberate, onscreen references to his former film-reviewer mother except to note how her colleagues now shamelessly bestow reviews as belated nursery presents. To others, Mr. Jealousy might suggest retroactive abortion.” Well then!

Further stoking the negative reactions, both at the NYFCC and on the Internet: The heckles came after a Harry Belafonte speech that was, by most accounts, wonderful. Introducing McQueen, Belafonte said, “Although he’s not from America, he is of America … [12 Years a Slave] answers the charge made in Birth of a Nation. In this film … Steve steps in and shows us, in an overt way, that the depth and power of cinema is there for now the world to see us in another way … For the first time in the history of cinema, [the film] gives a sense of who we are as Americans and the great promise of who we can be in the future.” (Listen to audio of the speech here.)

All in all, it turns out, the heckles fell flat. According to THR, “the outburst … could not be heard from the front of the room and did not interrupt the proceedings.” Sorry, Armond. Ramble louder next year?

Afternoon Links: Parks and Recreation Gave Itself a 100th-Episode Present