The Horrorcore Sweetness of Ariana Grande 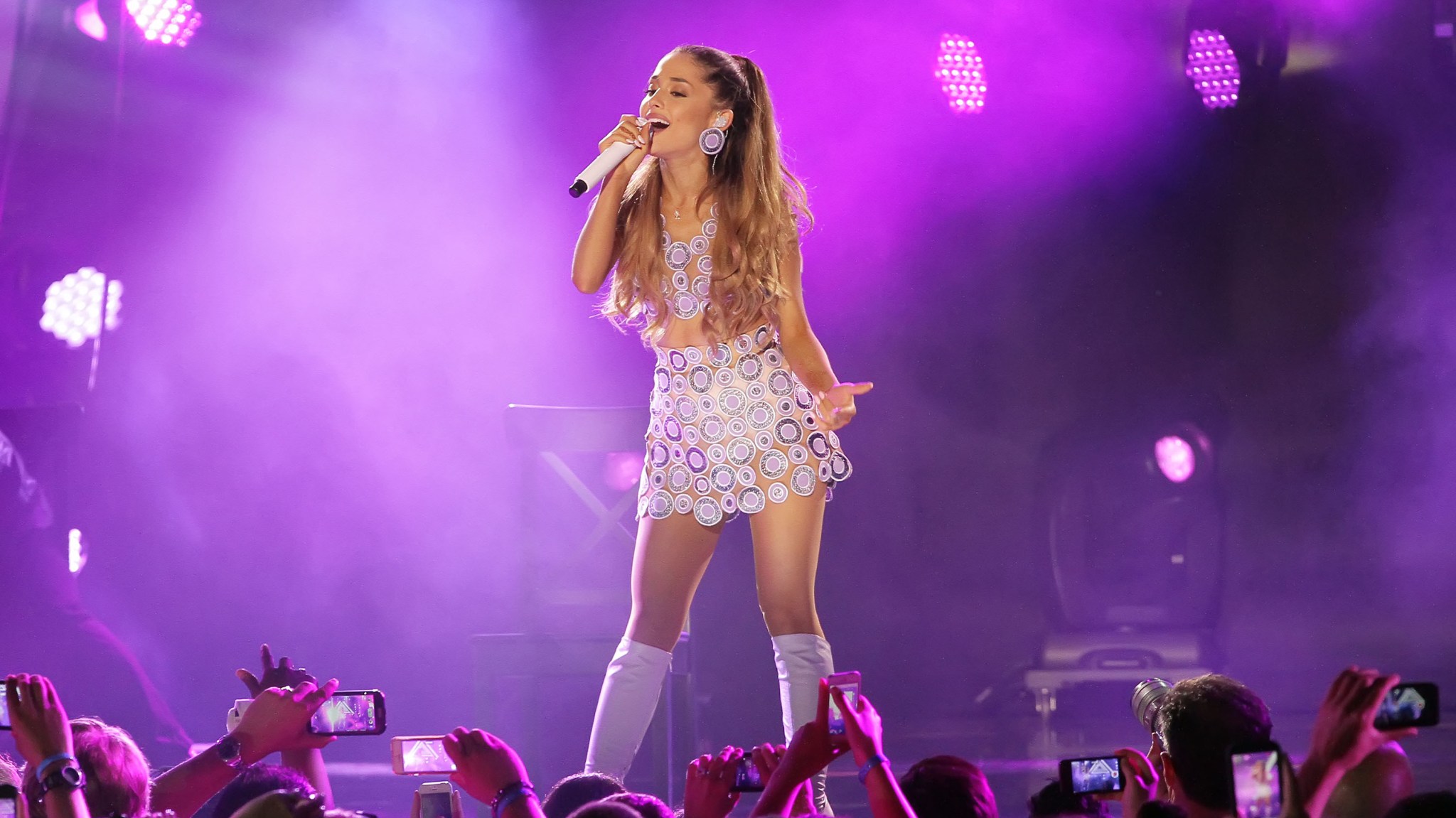 Last year, former Nickelodeon starlet Ariana Grande broke out as a singer with her Mac Miller–featuring single “The Way.” The song showcased her baby Mariah pipes, and the video introduced us to the girl in the high ponytail and ’50s party dresses. Her debut, Yours Truly, was in many ways a Mariah throwback as well, featuring a breezy blend of R&B and pop, over which Grande’s bubbly soprano could flow, sometimes pushing words together so they just became an indecipherable stream of syllables. Grande’s second album, My Everything, came out today, and it is predicted to sell well off the strength of its first two hit singles, “Problem” and “Break Free.”

Ariana Grande is a strange bird. She has the appearance of a pop star made in a lab. She’s 21, but still looks like a very young teenager, which makes her wardrobe of Lolicon styles uncomfortable to look at. Even when Britney Spears was a 16-year-old schoolgirl singing about sadomasochism in the “… Baby One More Time” video, she had a certain air of self-possession that made her performance feel, if not OK, at least somewhat knowing. Ariana Grande seems possessed all right, but not necessarily by herself. Perhaps she’s possessed by the demons she’s talked about seeing. Britney maintained the facade of being the perfect all-American, sexy yet virginal, bubbly girl next door for so long that her breakdown seemed nearly inevitable. But Ariana Grande only looks like a barely legal fantasy. When she talks, she breaks the illusion, because she says some really bizarre things.

Maybe she was lucky to come up through the Nickelodeon child-star machine rather than the more rigid Disney Channel’s, because she seems to have missed the week of media training where young idols learn not to say what they’re actually thinking. Grande seems to have no filter. This makes her seem like a real person, albeit a weird one. In an interview with Complex last year, while answering standard questions about growing up in Boca Raton and her food preferences, she recounts a “ghost/demon experience” she had after visiting a haunted castle in Kansas City:

[W]e wanted to go to Stull Cemetery, which is known as one of the seven gates to hell on Earth. The Pope won’t fly over it … I felt this sick, overwhelming feeling of negativity over the whole car and we smelled sulfur, which is the sign of a demon, and there was a fly in the car randomly, which is another sign of a demon. I was like, “This is scary, let’s leave.” I rolled down the window before we left and said, “We apologize. We didn’t mean to disrupt your peace.” Then I took a picture and there are three super distinct faces in the picture — they’re faces of textbook demons. … I deleted it. The next day I tried to send the picture to my manager and it said, “This file can’t be sent, it’s 666 megabytes.” I’m not kidding. I used to have a folder called “Demons” that had pictures with all the screencaps in it, but then weird things started happening to me so I deleted it.

Grande’s star has only risen since she copped to seeing demons, and the Complex interview hinted at the horrorcore underside of her pastel-candy facade. Because she presents as so overly feminine, Ariana’s gothness wasn’t immediately obvious, but the more she talked, the more overt it became. “I’m super girly when it comes to fashion,” she told Complex, “but on the inside I’m only fascinated with dark, macabre, and weird things. Like the ‘Thriller’ video. Like Tim Burton.” Tim Burton seems like a perfect reference point: Ariana looks just like the doe-eyed Margaret Keane paintings from Burton’s new movie Big Eyes, and her personality has an echo of his characteristic juxtaposition of darkness and kitsch. Grande seems like a Tim Burton heroine, a sweet-looking girl with a malevolent secret.

Ariana credits her love of all things spooky to her mother, a “badass, independent” CEO of a company that manufactures communications equipment for the Navy, who wears all black and who smeared blood on the walls of the Grande family’s new house for Halloween one year. Then Ariana talks about how fans thought a microphone on the floor in one of her selfies was a huge dildo. Unlike Miley’s dildo-centric selfies, which are clearly intended to garner attention, this just feels like a hilariously matter-of-fact statement. A Billboard cover story was equally odd and horror-focused. “I always wanted to have face paint on or be wearing a Freddy Krueger mask, and I would carry a hockey stick around. … For my fifth birthday party we had a Jaws theme and all my friends left crying,” she told the interviewer.

What scares Grande the most about being a pop star is having to look directly into the camera, she says, and it shows. She seems wildly uncomfortable onscreen in her own videos, sometimes looking like a kitten trapped in a cage. She has said performing her music is different from working on a show like Victorious or Sam & Cat, because playing a character other than herself is less stressful. She seems very stiff trying to be the pop-star version of herself. Ariana likes to show only one side of her face, which is the second-most Mariah-like thing about her (after her whistle-register voice). She is following a Mariah-esque career path, too, shepherded by Scooter Braun, veering toward the “Fantasy (Bad Boy Remix)” years. My Everything is laden with rap features that make her otherwise pop songs playable on “urban” radio stations. But she also has EDM songs produced by Zedd and David Guetta to ride the last waves of pop-EDM to the shore on pop radio. “Problem” featured Iggy Azalea and was produced by Max Martin, Shellback, and Ilya, which made it playable on basically every station but country (and if she’d thrown some banjos on a remix, who knows?). It was one of the summer’s biggest songs, perhaps by default of being played a billion times, and “Break Free” looks to be one of the early fall’s.

So far, the darkness that makes Ariana more interesting than your standard-issue vessel for Max Martin songs hasn’t shown up in her music. And while a sexy sophomore makeover somehow made her whole Lolita look even more uncomfortable, it hasn’t really bestowed any new sheen of maturity on her public image. Maybe what makes Ariana so fascinating is the tension implicit in watching her, of watching someone belt out an anthem about how they’re going to “break free” while looking like they’re performing only because somebody is threatening them from just offstage. You don’t necessarily feel this conflict when you’re just listening to the song, because she’s growing into her big voice and learning how to handle it. But when you see her doe-eyed visage staring helplessly into the lensed void from an awards show performance, it’s hard not to yell, “MAKE A RUN FOR IT!” at the screen. If anyone is suited to star in an American live-action version of Perfect Blue, it’s Ariana Grande.

Scooter Braun let Justin Bieber take the reins of his image and shift it into … whatever it is now, probably because Bieber didn’t give him any other choice. Couldn’t Grande stage a similar coup? Shake off the baby Mariah tags and find her destiny as the Hot Topic mall princess from Florida she’s meant to be? I’m rooting for Grande to make the leap and unleash her inner Freddy Krueger mask onstage. She’s already transcended several of the stages that child stars get stuck on. Will she escape?

Filed Under: Music, Ariana Grande, my everything, Tim Burton, Ghosts

We Went There: The Teen Culture Stock Market of the MTV VMAs