We Went There: The Teen Culture Stock Market of the MTV VMAs 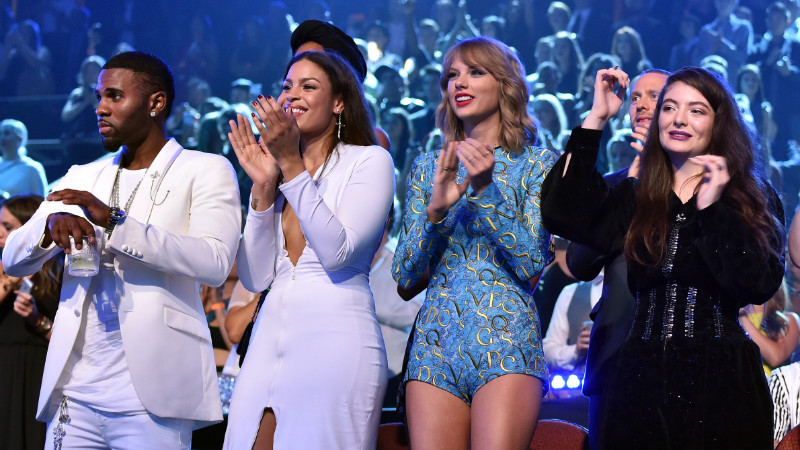 For all its much-hyped unpredictability, there’s something brilliantly self-aware about the MTV Video Music Awards, even after all these years. While most award shows have clung to the pomp and circumstance of “honoring” entertainers for their talents, even as their audiences grow increasingly jaded about the concept of the awards themselves, MTV makes no bones about what we’re all really there for: not statues, but spectacle. The VMAs don’t partake in the sacred kabuki of tradition — they’re rigorously scheduled like any live show, organized meticulously around the possibility of any number of celebrity freak-outs, but instead of resting on legacy, the show has always had its eyes locked on the next thing, the thing kids will buy tonight, not what they bought in years past. It endures not because it purports to select the best of the best, but because it’s always been refreshingly frank in its understanding that award shows are never about the awards anymore; now, they’re about the show — and the money, of course.

In a way, MTV has always been synonymous with selling out in clear view, and its conspicuously unabashed approach allows us to dispense with laughable fantasies of meritocracy and get on with the circus. In an era when the music industry is more transparent than ever, it’s hard to look pretty under the harsh light of a new, rapidly evolving era — unless, like MTV, you were born in it.

That much is clear when you’re sitting inside the cavernous Forum as showrunners piece together the whole broadcast spectacle right before your eyeballs. Sitting above and behind the cameras, I had a great view of producers as they barked patronizing marching orders through bullhorns as pieces of the elaborate stage rolled around during commercial breaks, maneuvers that, not unlike the endless string of tampon ads you’re enduring at home, took longer than the actual performances. Even in a tame year — when nothing really happens; when no one does anything they aren’t supposed to do (save Jim Carrey reprising his creepy-uncle role with Ariana Grande’s lower back); when, surprisingly, no one blunders into a heinous display of racial tone-deafness (save, you know, Iggy Azalea’s general presence); when even a formidable Beyoncé performance, while dazzling, feels familiar and expectedly well oiled (including a shiny confirmation of marital bliss) — sitting in that room makes you appreciate how deftly this monstrous machine continues to rake it in, whether something crazy happens or not.

Unlike shows like the Grammys, the VMAs seem to have a unique understanding of what fandom really is. (The National Academy of Recording Arts and Sciences doesn’t care about trending topics or GIFs, to its detriment.) The producers of this show spend all year paying attention to and actively engaging people who like the stuff that comes to fruition onstage for two hours a year, which is why, in the arena, the buzz for fast-ascending acts like Ariana Grande is so palpable. It’s why you can practically see corny dad jokes, made by presenters whose celebrity matters more to the first MTV generation than this one, fizzle and die in mid-air. For all its high production, there’s something unfiltered and Idiocracy-like about its depiction of teenage priorities: a “moment” of silence for Mike Brown and Ferguson lasts about three seconds, a Robin Williams tribute looks like something put together in five minutes by a high schooler with PowerPoint and Google image search, an audience member screams “Go away, we want Miley!” as the pop singer pulls a Marlon Brando by sending a homeless youth in her place.

Being present is helpful if you’re a brand marketer too. Listening to the ebbs and flows of the audience’s response to acts and presenters — ballistic for Nicki Minaj and Sam Smith, (surprisingly!) lukewarm on 5 Seconds of Summer and Taylor Swift, and practically dead on Jim Carrey and Jeff Daniels’s slapstick — was like watching the teen stock market rise and fall (and perhaps their hormones, too?). It’s also obvious, in person, how much effort is put into each act: The 5SOS boys’ stage, for example, took an exceptionally long time to assemble, especially for such a mediocre, halfhearted performance.

But while being in the presence of so many major-label golden children is exciting and eye-popping in all the ways you might hope and imagine, it’s clear that what makes the show that way isn’t actually the celebrities themselves. When they’re not lit with fireworks and surrounded by backup dancers, aggressively proving they’re worthy of so much cash and fame, they seem a lot more like the popular kids, sitting literally on a pedestal where everyone else in the cheap seats can watch them be wonderful or horrible or a little of both.

Instead, the electricity of being there is the knowledge of what everything in this room means to the disposable income watching at home. Yes, breathing the same air as Beyoncé and Nicki Minaj, both masters of their craft, is unspeakably thrilling, and it’s fascinating to confirm that entertainers like Jessie J have the IRL vocal cords to back up their aggressive promotion. Ironically, though, there’s a bizarre disconnect when attending such an aggressively marketed broadcast like this in the flesh. Even being in a room full of the hottest moneymakers in show business, the evening feels incomplete when you realize that much of that expertly constructed excitement is unattainable, because, like any live-show broadcast, if you’re in the room, none of it is actually for you.

Which makes sense: the $12 beers that the people in the auditorium buy benefit the venue more than the network, and they’re not watching commercial breaks stuffed to the brim with ad dollars. The suckers at home make MTV that bread, but in exchange they get to see performers up close, see their faces, their minute expressions and fuck-ups. Monitoring Twitter in the arena is useless and confusing, because half the televised and streamed moments that are so fun to snark about are invisible to the people in the seats. Ticket holders at the Forum don’t realize that Nicki Minaj is literally holding her dress on until a few minutes into the opening performance of “Bang Bang.” They don’t witness Rita Ora threaten to kill the audience at home if they change the channel at all. And they certainly can’t hear Taylor Swift’s karaoke-bar vocals, because the sound system makes everything sound good in a cavern. The thing people at home envy doesn’t really exist.

But this is why the VMAs are never disappointing in the way that the Grammys or the Oscars can be. Those shows are hung up on the ceremony, the glitz, and the glamour of a tradition that stretches back nearly a century and has never really been about who deserves to win. In person, I’m betting (because I can’t say from experience) that those shows are much more satisfying, because they’re catered to the elite, the biggest — rather than the hottest — superpowers in entertainment. At the VMAs, there are awards, yes, but the people making the winning videos aren’t even the ones accepting the prizes.

The real competition lies on Twitter and Tumblr and in living rooms, in an agile, constantly adjusted, multiscreen experience that pushes iTunes downloads, and MTV is in no way shy about making that as obvious as possible, to maximum effect. The lightning-round pop tasting that is the VMAs drives album and ticket sales — of course seeing two minutes of Nicki performing a frustratingly clean “Anaconda” makes me desperate for a full 90-minute, ass-to-the-ground set — so why wouldn’t the most entertaining experience be in the hands of those in the best position to buy a new album or watch a new video the second the credits start to roll? A live stream is exponentially better business than a $12 beer, anyway.

The Horrorcore Sweetness of Ariana Grande