And the Front-runner to Replace Regis on Live! Is … Seth Meyers? 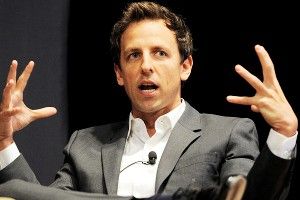 Yes! As that (hopefully) informative headline suggests, Saturday Night Live‘s Seth Meyers is considered the favorite to replace Regis Philbin, who retired last November, as Kelly Ripa’s co-host on the morning talk-show institution Live! this fall. And it gets weirder: Showbiz411 reports that if Meyers were to get the gig, he’d have to triumph over both NFLer turned TV personality Michael Strahan and elder-lady-beloved crooner Josh Groban. What a lineup.

Of that trio, it seems like Meyers is both the least famous and the least conventional candidate. Strahan’s got that built-in ex-athlete mass appeal, and Groban’s exactly the kind of harmless, cheesy-smile guy you’d expect to see on morning TV. But Seth Meyers? With all due respect to Regis, Kelly, and the fine institution that is Live! — isn’t Seth a little too, you know, cool for the job? It’s not like this is completely out of the blue, though. Meyers has guest hosted several times this year, and is up for another big run starting this Monday — five days, right in the heart of sweeps. Giving Meyers that prominent guest spot over Groban and Strahan is part of the reason why he looks like a lock to win the gig full-time. But it’s also that the other obvious candidates, like Anderson Cooper (who is apparently Kelly’s no. 1 choice) and Neil Patrick Harris, are locked up on commitments to their other shows. And so, as Showbiz 411 explains, “it’s Meyers who has the widest appeal, background and strengths.”

By the way, if Seth gets the gig, he’ll most likely be able to continue doing “Weekend Update” but will not get to stay on as SNL‘s head writer, a job he’s had since 2006. So if all goes according to plan, there will soon be a prominent vacancy in the SNL ranks. Strahan/Groban, prepare your SNL audition material accordingly!