And the Dudes Stacking the Most Paper in Hollywood Are … 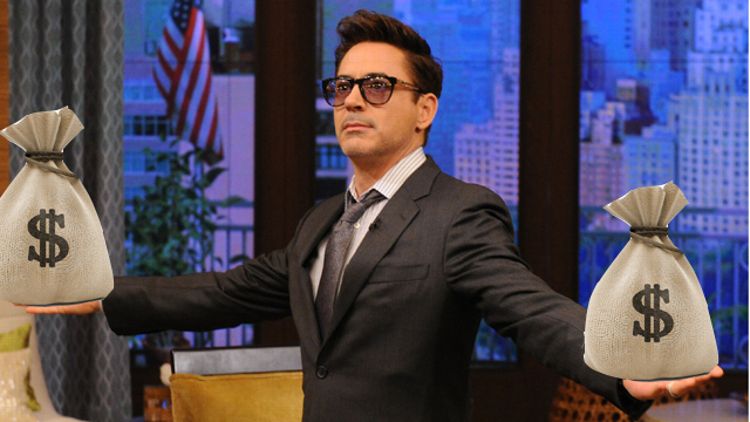 The magazine went ahead and crunched the numbers, putting together a top 10 of dudes — and, yes, troublingly, they are all men — who’ve collected the most American currency over the last 12 months. And your top dog is … Robert Downey Jr.! Tony Stark continues his amazing career-arc reversal, from über-talented what-could-have-been-a-cautionary-tale to dude-with-enough-money-to-fund-the-building-of-skyscrapers-that-look-like-spaceships-in-Dubai. That he’s done it all while maintaining that baseline rakish charm is all the more commendable. When a guy makes $75 million — $75 million — in one year, there’s supposed to be backlash. But in 2013, we’re all just grateful RDJ is around to make our blockbusters watchable. Bless you, Robert. And for your efforts, I will now PayPal you an additional $17. In the words of Mr. Ciara, you deserve it.

Next on the list: Channing Tatum! In the wake of all the hand-wringing over White House Down’s belly flop, this seems particularly funny. We’re still very earnestly concerned about whether or not Tatum’s already a movie star, or if he still needs to prove himself. Meanwhile, Chan keeps it moving, to the tune of $60 million over the last calendar year. As Forbes explains, Tatum “self-financed … Magic Mike … so when the $7 million film hit it big at the box office, [he] took home millions. Now Tatum is growing Mike into a franchise complete with a Broadway show, a proposed bar in New Orleans and a sequel in the works.” And if everything goes south, he can always charge for “Pony”-dance home visitations. Does $50 a pop sound reasonable?

In the three-hole: Hugh Jackman, with $55 million. Kind of surprising, right? He’s certainly an omnipresent movie star and all that, but I didn’t have him pegged for this high up on the totem pole. Then again: Les Misérables made $438 million. Never underestimate the power of a good mouth close-up.

Next we have Mark Wahlberg, whose Ted overperformed to the tune of $550 million (on $50 million down). I don’t really have anything to add, so here’s just a friendly reminder: At some point, in the not-too-distant future, Wahlberg will almost definitely win an Oscar. It will, almost definitely, be deserved. Start mentally preparing now?

And in fifth place: It’s The Rock! From all his various sequel-hoppings, dude managed a hearty $46 million. What a heartwarming story. Dwayne’s got, at best, three facial expressions, and, somehow, is a one-stop entertainment powerhouse. So you can’t say he doesn’t deserve it: Truly, no one works harder (or has a higher PEDs budget to account for). Salute!