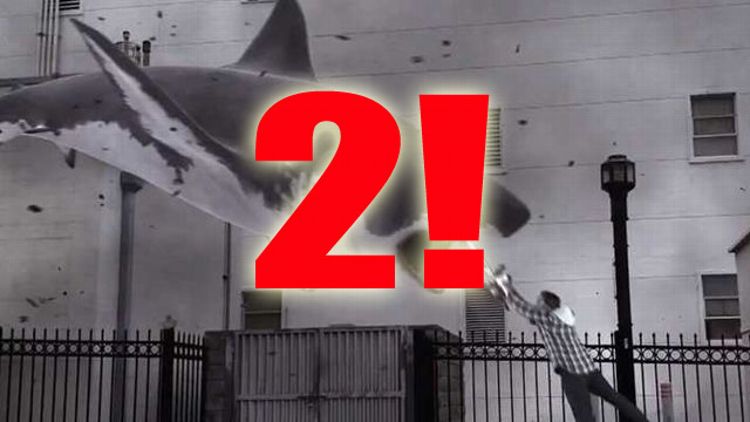 The problem with the shark news game these days is that right after you hit publish on a shark post, there’s another shark development swimming out of the murky depths to jam its greedy snout into your submerged blogging cage and make you soil your chain mail sharksuit. Virtually the moment we finished venting our spleen about the upstream battle soon to be fought by inevitably inferior shark-product Ghost Shark, SyFy changed the sharkversation by announcing that Sharknado, the now-impossible standard by which all future sharkbusters will be judged until the oceans overtake the land and sentient sea-predators wipe out all of humanity to prevent low-budget film studios from further exploiting their proud culture, will get a sequel.

SyFy hasn’t yet announced which cast members will return for the second installment, but it’s impossible to imagine that Ian Ziering and Tara Reid wouldn’t return to reprise their roles as “guy who leapt into the mouth of a great white with a chainsaw” and “lady who can’t figure out why the grips keep menacing her with tiny shark-head tennis balls stuck on the end of boom handles.” Neither actor, God bless their hearts, will likely parlay Sharknado’s buzz into anything more time-consuming than a two-week Robobeaver! Metal Buck-Teeth of Death shoot before the sequel can go before the cameras, so let’s count them in — you can now stop rolling calls to the Teddy Ruxpin who books Screech and VICKI from Small Wonder. The numbers will ultimately work out for everybody.

But even with the original cast intact: Maybe let’s not do this. We don’t care that the next one will be set in New York, or that they’re letting the fans title it via Twitter, or that it might, against all odds, actually turn out nearly as good as the original. Sharknado was, as we said yesterday, perfect. Let’s not look a gift shark [writer jumps out open window into an above-ground pool filled with bull sharks, is instantly torn to pieces, end of shark post].

And the Dudes Stacking the Most Paper in Hollywood Are ...