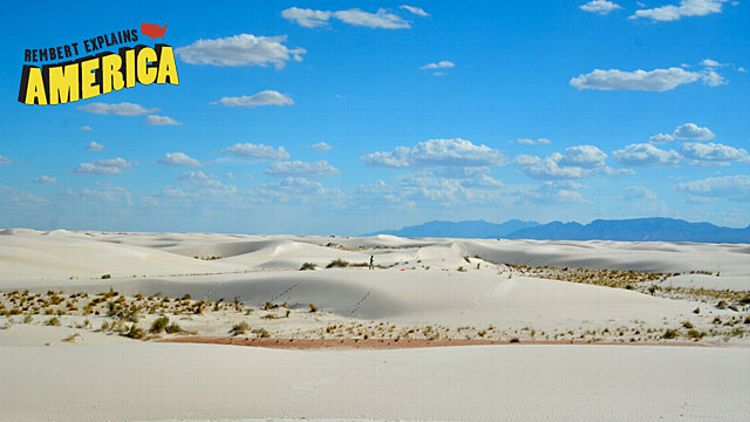 Those were the kernels of wisdom offered up by the elderly woman in the gift shop at the New Mexico Museum of Space History. I’d just purchased a few NASA shirts, because the venue — home of the International Space Hall of Fame — transformed me back into the 8-year-old astronaut-in-training I once was, and our next stop in the Alamogordo, New Mexico, area was the White Sands National Monument.

I only knew of the White Sands from an e-mail that suggested if I passed through New Mexico, it was a must-see. En route to Albuquerque as I approached from the south, and at that point only 20 minutes from the park, it seemed like a quick stop for some good photos.

But then she brought up the sleds. Apparently, we needed sleds for this monument.

There was confusion, but I wasn’t wired to question a 70-year-old woman who works in a NASA gift shop. So two orange sleds, resembling garbage can tops and certainly not meant for anyone over 12 years of age, were purchased, and my friend-photographer Graham and I were off.

From the parking lot of the Space Museum, more than 15 miles off, you could see a white shimmer in the distance. This was White Sands.

After driving 10 minutes, getting pulled over for going 48 in a 35, dodging a ticket, reapplying deodorant, picking up two gallons of water as we were told, and then driving 28 miles per hour for an additional 20 minutes, we arrived. A few notes about this sign. One: “Dune Area.” The sleds now made a lot more sense. This had incredible potential. Two: “No Water Available Beyond This Point,” while positioned on a sunny orange backdrop, was extremely ominous. Three: “Sleds Available.”

The NASA gift shop lady hustled us. We later learned that if you rent sleds at White Sands, you get a portion of your money back upon their return.

The first few minutes of the drive weren’t exactly “white” or “sandy.” Large stretches of green lined the gray pavement, with patches of white sand nudging out, like suggestions that good things were to come, as long as we kept driving.

So we kept driving.

Much of the drive was spent laughing at another detail from the e-mail on White Sands. We were told shoes were not necessary once you got to the Sands.

And then, while we teased, the pavement disappeared, as did most traces of green life.

I pulled over in disbelief — the sight was something straight out of an apocalyptic sci-fi film. Or, you know, Boyz II Men’s “Water Runs Dry” video. One of those places I didn’t actually think existed. The temperature was scorching, but it barely registered. We were surrounded by majesty. Off in the distance, all was still and peaceful, save the kids running up the dunes and sliding down.

At times, laughs could be heard careening from the top of the dunes. Other times, there was complete silence. And not an eerie silence, but a beautifully calming silence. An “I never want this to end” silence.

Some areas were checkered with footprints and paths created by sledding, others untouched, like undiscovered lands. When presented with one of these patches, I simultaneously felt an instinct to run through them, leaving your crude mark, and to leave it be. In peace.

I acted on both for the two hours spent frolicking throughout the White Sands National Monument.

I hadn’t used that word to describe myself in some time.

Yep. A brother was frolicking. No doubt about it.

But it wasn’t just me. Everyone at White Sands, young and old, behaved in such a way. Nothing else really seemed to matter.

As we prepared to leave, I took one more trip atop a dune for a final snapshot. Even after two hours I couldn’t fully comprehend that this actually existed. The walks to the summits were thrilling, because at a certain angle, all you could see was the hill and blue sky; it felt like walking off a cliff. But then the moment came, right before reaching the peak, when the vastness opened up and all you could do was shake your head in wonder.

“This place is amazing.”

I probably said that 30 times that afternoon.

Oh, and while all of this was happening, everyone was barefoot. The ground: shockingly cool. I owed my man an apology. He was completely correct.

Barefoot was definitely the way to go.

Afternoon Links: The Local News Was So Much Better in the '80s