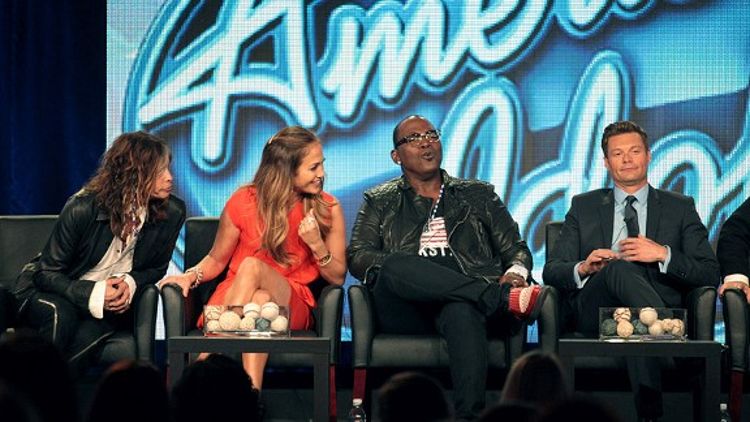 Last week the latest TCA press tour got going, with presentations from Fox and NBC that both touched upon past screw-ups and successes and looked to the future, a theoretical wonderland of zeitgeist-capturing television. So what went down?

• For the record, haters, yes, NBC boss Bob Greenblatt knows exactly how crappy his network is. A representative smattering of self-deprecation from good ol’ Bob: “[Prime Suspect] was probably the biggest disappointment [of the fall]. Maybe I should just blame the hat and move on”; “[Playboy Club] was just a rejected concept”; “I have throbbing headaches about a lot of things.” In other words: “We had a really bad fall. Worse than I hoped for and about what I had expected. … We have a long road ahead of us. So bear with us.” Aww, Bob, you’ll figure it out, we know you will!

• Fox boss Kevin Reilly isn’t all touchy about American Idol’s progressive ratings slip, chalking it up to the fact the old warhorse is now entering its 11th season. As for another obvious factor &#8212 the competition from The X Factor and The Voice &#8212 it ain’t no thing, ain’t no thing. At the American Idol panel, executive producer Ken Warwick took shots: “No other series over the years has produced anything like the number of stars that we have. To be honest, [X Factor UK winner] Leona Lewis was a kind of one-of-a-half-hit star for 10 minutes, but there’s no Kelly Clarkson, Carrie Underwood, Jennifer Hudson, Katharine McPhee. They’re really stars.” Randy Jackson: “The winner of The Voice, as I will remind you, was an artist who had a deal on Capitol for many years &#8212 a failed contract over there, so for that show it was almost like second-chance people, it wasn’t like some new artist. It’s a different thing.” Also: “We will definitely never ever rip off Star Trek like The Voice did with spinning chairs.” Meanwhile, The Voice’s Christina Aguilera kept it classy with her digs: “We all told them we’re not signing up for this show if it’s about ridiculing someone or mocking talent.” “That’s right, we have to keep the focus on the spinning chairs,” Cee Lo added, to confusion and avoided eye contact.

• Alec Baldwin’s coming back to 30 Rock! OK, it’s not major news: it wasn’t exactly clear what Donaghy’s status was before, although it would have been fairly surprising if he hadn’t returned for one more season. Still, considering the Eeyore tone of Greenblatt’s presentation, he could have announced Alec was being replaced by a platoon of Billy, Stephen, and Daniel and it wouldn’t have been too shocking.

• Also returning, really, NBC swears, is Community, which was yanked off the midseason roster. Greenblatt: “When I announced our midseason changes last fall and took Community off the schedule, I failed to explicitly say that it would be back. I want to expel any notion that it is just disappearing off the schedule.” Maybe you can stop rocking back and forth in your bed while clutching your Community DVDs and weeping, Greendale fans?

• And now for some out-and-out optimism for NBC: the powers-that-be believe that Smash, a fictionalized look behind the scenes of the staging of a Broadway musical about Marilyn Monroe, can do big numbers, and are rolling out a big fat multifaceted promo campaign (American Airlines in-flight placements, consumer screenings, and also maybe someone at NBC will be into getting a Smash lip tattoo?). Says creator Theresa Rebeck about Smash’s potential (an actual Broadway adaptation is already being kicked around): “What we are aiming to do is write a great television show. That is really what we’re all about. And what happens in the future, who knows? Like, we could all die tomorrow or something.” Ah, Theresa &#8212 you fit right in at NBC.

• Ahead for Fox: a late-night animation block on Saturdays run by ex-Adult Swimmer Nick Weidenfeld. Not ahead: that previously rumored Glee spinoff, which would have featured graduating characters played by Lea Michele, Cory Monteith, and Chris Colfer. Reilly says, “We’d like to have all of them back,” but wouldn’t discuss how exactly that would work. Maybe they could hold the boom mics or something?

• The best news out of TCA? As Adam Scott previously told Grantland, the Party Down movie really is happening. This time it’s Megan Mullaly (who stars on the Fox show Breaking In) spilling the beans: she says, “[co-creator] John Enbom is writing it right now; I’m excited about that,” and that everyone is expected back with the possible exception of Jane Lynch. If anyone wants to spend some of today high-fiving about this, I am available.

The British 1 Percent: On the (Very Soapy) Return of Downton Abbey