The British 1 Percent: On the (Very Soapy) Return of Downton Abbey 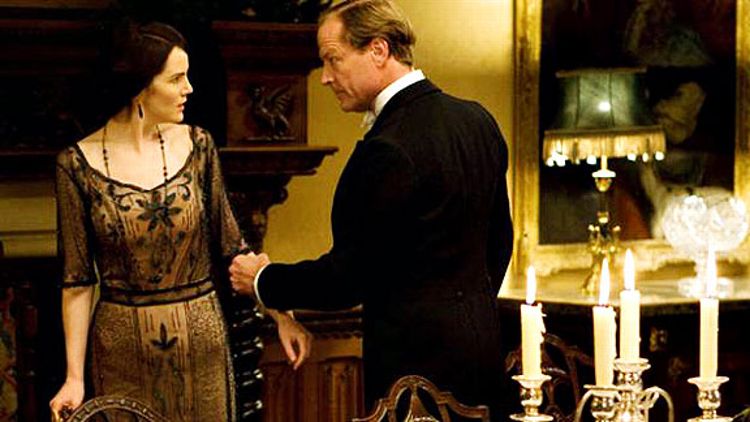 Polish the biscuit jars and iron the broadsheets! Downton Abbey’s back for a second season of irresistible nonsense (pronounced, of course, with the emphasis on the first syllable). The classist — if not quite yet classic — British drama turned a colony of skeptics into the United States of Anglophilia last year, thanks to its expertly told tales of upstairs/downstairs intrigue in a post-Edwardian English manor. Created by footman-fetishist Julian Fellowes (Gosford Park), Downton chronicles the doings at the eponymous edifice, home to the kindly Lord Grantham, his American wife and three comely daughters, and a staff so gossipy they’d make Harvey Levin blush. Into this figgy pudding steps Matthew Crawley, a distant cousin and, thanks to the sinking of the Titanic and the Granthams’ lack of sons, the presumptive next Earl of Downton. Crawley’s a posh blond solicitor but has enough proletarian habits — rides a bike, dislikes butlers — that he’s basically seen as a bomb-throwing radical by his hosts, particularly Lord Grantham’s sniffy mother, the fearsome Dowager Countess (played by Dame Maggie Smith), who eyes Crawley and his meddling, medically inclined mother, Isobel, like a police dog watching a freegan in Zuccotti Park.

The brilliant trick of Downton’s first season wasn’t just making contemporary audiences care about the heir supply problems of the 1 percent a century ago, it was infusing impossibly small stakes with larger-than-life emotions. One episode hinged on who grew the finest roses in Yorkshire, the Dowager Countess or (gasp!) a commoner. In another, we thrilled to the potential misdiagnosis of a case of dropsy. Yet the uniform excellence of the cast and the depth and warmth of the characters (particularly those downstairs, including the solemnly dignified Carson — pictured here — and the no-nonsense Mrs. Hughes) made up for these and other flights of foofaraw, including Lady Mary’s virginity not giving up without a fight (to the death) and a malicious miscarriage perpetrated by a mislaid bar of soap. It helps, of course, that the majority of upper lips on Downton Abbey aren’t stiff at all — they’re pillowy and pouty in the tradition of all the finest bodice-ripping tales from across the pond. And if class issues and cloche-porn were the meat of this sumptuous repast, then the sweet, too-good-for-that-world romance between kindly maid Anna and crippled Mr. Bates, a valet more noble than the nobility, was the rewarding coffee and brandy afterward.

The end of Season One brought not only the dawning of the first World War but also the rejection of Lady Mary by Cousin Matthew (thus dooming the Crawley girls to . . . slightly less well-off lives in slightly smaller houses?) and the emergence of fusty old PBS as a potential major player in the prestige television battlefield. It’s a natural move for the perpetually underfunded broadcaster, which was telling slow-paced stories long before AMC started investing in rain machines. (That said, they still haven’t quite figured out how to handle this whole “popularity” thing: they’re burning through the entire new season in just seven weeks. Slow your roll, Big Bird. It’s not a race!) And as the season begins, it’s immediately clear that both expectations and budgets are now considerably higher. “Things cannot be the same when there’s a war on,” huffs Lord Grantham early on. Well, yes and no. The stakes have advanced admirably beyond stolen snuffboxes and whether the chopped eggs are meant for the roast or the courgettes. But even with trench warfare raging on the Continent, Downton’s soaring, soapy heart beats undiminished.

Cousin Matthew is Lufftenant Matthew now, honorably manning the line in France and, on his off days, planning on spite-marrying a reedy blonde named Lavinia. Meanwhile, back at Downton, Carson is working his sneaky-big heart to ruin, covering for the undermanned staff — Thomas is dodging bullets and sharing pilfered tea with Matthew while William is soon to join him, despite the best efforts of his father and the Dowager Countess. Lord Grantham is chafing at the indignity of being a faux-soldier in charge of morale on the home front while Lady Grantham has recovered from the loss of her baby but maintains her oddly hypnotic baby voice. Lady Mary is still making googly eyes at her third cousin but seems resigned to a life with a self-made newspaper dandy named Carlisle, whose foxy looks and foxlike demeanor suggest a tweedier Richard Branson. And as for poor Mr. Bates, the Job of the northern counties, the death of his mother allows him a rare moment of happiness. His surprisingly sizable inheritance suggests a way for him to divorce his she-devil of a wife and follow his Fawlty Towers-esque bliss with Anna. But no, this is Bates we’re talking about. And soon enough his broad shoulders are forced to bear another hopelessly selfless load: Vera arrives, sneering and spiteful, and threatens to bring down Downton with the truth about Lady Mary’s dead Turk and Anna’s role in moving the body. The next morning Bates is gone, back to London to suffer in silence, leaving Anna’s mangled heart and further legends of his near-mythological decency in his wake.

Of course, we haven’t even mentioned Thomas’s more-or-less self-inflicted stigmata and his touching rehab gig with a suicidal, bi-curious Tiresias; Lady Sybil’s rejection of her Wobbly chauffeur and subsequent embrace of her inner Florence Nightengale; or unlucky Edith’s turn as a tractor-driving, beer-swigging homewrecker. Does this seem sudsier than before? Perhaps. But it’s no less riveting. Smartly sprinkled beneath the soaring strings and haunted looks across the melba toast is a fascinating exploration of social mobility; more specifically, the ingrained lack of it within English society and the sudden, uncomfortable opportunities presented by the Great War. For some &#8212 the hawkish, horrible O’Brien, for example, or her gullible mistress, Lady Grantham &#8212 the smothering sameness of daily life provides blessed stability in a scary, changing world. But for most of our characters, and certainly all of the sympathetic ones, a life without the possibility of transformation is no life at all. As Matthew tells the suddenly simpatico Thomas, “War has a way of distinguishing between the things that matter and the things that don’t.”