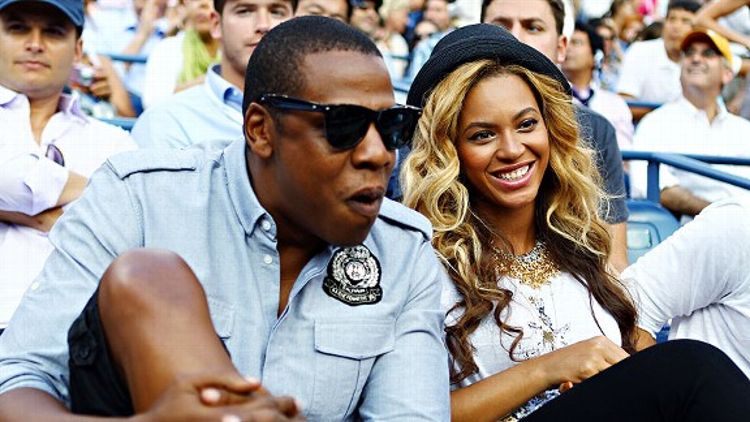 Beyoncé checked into the hospital Saturday night under the name “Ingrid Jackson”: First Sasha Fierce, now Ingrid Jackson. Bey sure has a thing for European names. Maybe it was after the Dutch astronomer Ingrid van Houten-Groeneveld.

The baby is a girl named “Blue Ivy Carter”: Despite early false reports of “Tiana May.”

Gwyneth Paltrow confirmed the name on Twitter: Because she is a close personal friend of Hova. Straight off the block. And a fame whore (to the manor born).

Kanye West is the godfather: Perhaps Kanye’s biological clock is responsible for his most recent Twitter outburst about overthrowing the oppressive sociocultural order. Or maybe that night he was just doing a lot of … thinking.

The divine couple spent New Year’s Eve having “a cozy and intimate dinner” of fried chicken and oysters (nom) at Buttermilk Channel in Brooklyn: “She looked amazing. She wore sky-high heels. It was really impressive for an enormously pregnant woman.” I don’t know if the word you’re looking for is “impressive.”

“She won’t be spoiled, but she will be very well looked-after”: This means she will be totally spoiled. Obviously, we hope she’s more Shiloh Pitt than Suri Cruise.

“IVY” is a homophone for IV: Bey’s favorite number and namesake of her most recent (fourth solo) album, “4.”

People were super-pissed that the Lenox Hill Hospital shut off the whole fourth floor for the birth, after Jay and Beyoncé rented it out for $1.3 million: Behold: “Forgive my language, but giant FUCK YOU to Beyonce, Jay Z and Lennox Hill Hospital in Brooklyn. My cousins Neil and Roz had beautiful twin baby girls who were born six weeks early and are currently in the natal ICU unit trying to get healthy enough to go home … but mother and father weren’t allowed to be with their own babies because of Jay Z and Beyonce’s thugs, who (with the hospital’s blessing) closed off that ENTIRE WING … separating parents from their infants so they can have their own celebrity entourage come visit without having to interact with the “little people”. Okay … I can understand a wish for privacy … BUT NOT AT THE EXPENSE OF OTHER PARENTS AND THEIR INFANT CHILDREN and reducing other families to tears. I wish I could say I’ll never buy your crappy ass music but I never would have anyway … so I’ll just have to settle for telling everyone I know what incredible douchebags you are.”

• Distaff Day, also called Roc Day (!!!!!!), the day after the feast of the Epiphany (dinner at Buttermilk Channel?). “The distaff, or rock, used in spinning was the medieval symbol of women’s work.” Who spun the world? “As an adjective the term distaff is used to describe the female side of a family.” Roc Day … spinning … records … female craftsmanship … BLUE IVY CARTER.

• Victory Over Genocide Day in Cambodia, a holiday celebrated in some parts of the country (but not all) to commemorate the overthrowing of Pol Pot and the Khmer Rouge by a coalition of Cambodian and Vietnamese troops.

“Blue Ivy Carter” Is an Anagram For …

1. “Lubricate, Very”: Imagine Beyoncé’s leg shimmer being applied her thighs during childbirth to help the baby slide out and look glowingly highlighted in photographs.

2. “Curable Verity”: The only cure for realness is even more realness.

10. “Bravely Cuter, I”: If you’re going to try upstaging Beyoncé, you better be her child.