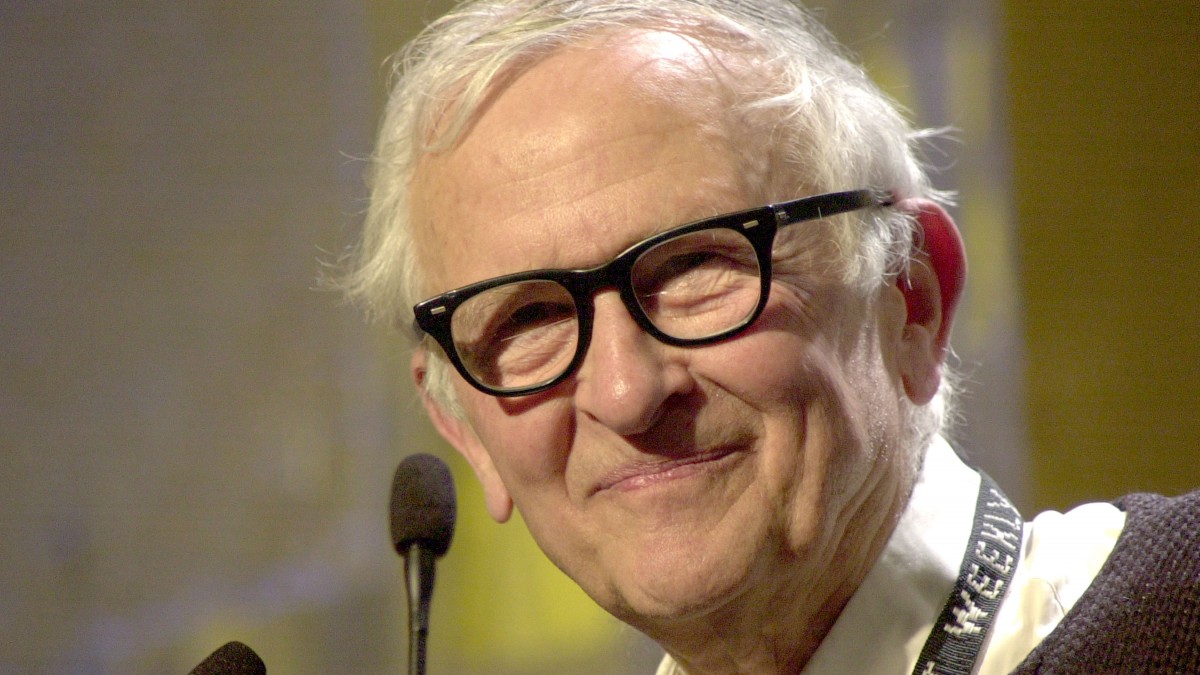 If there’s an ideal locale to hear that a hero of American nonfiction moviemaking has died, a very good international documentary festival has to be up there. So there we were last Friday in Columbia, Missouri: scores of people dancing down Ninth Street partly in a parade to kick off the True/False Film Festival and partly in celebration of the life and legacy of Albert Maysles, whose death, at 88, was reported earlier that day. A lot of the dancers — along with plain-old parading pedestrians — did so with 8½-by-11 printouts of Maysles and stills from a few of his acutely dissected masterworks (Salesman, Gimme Shelter, Grey Gardens) pinned to their outerwear.

Maysles, who was born and raised in the Boston area and died at home in Manhattan, sought out charisma and pizzazz and mountainous personas — door-to-door slicksters, the world’s biggest rock ’n’ roll act, mythical squalor-bound spinsters, the otherworldly conceptual artists Jeanne-Claude and Christo — and sought ways to locate the emotional valleys in them. (One of his final films, Iris, a portrait of the flamboyant decor impresario Iris Apfel, opens next month.) Maysles was a hero and a pioneer and, by many accounts, irresistible and a delight. He was not, however, a star. That’s why his movies worked. Working alongside his brother, David, who died in 1987, and often in collaboration with Charlotte Zwerin, who died in 2004, Maysles (it’s MAY-zuhls) remained magically invisible as a filmmaker.

Invisibility — or at least a kind of transparency, a directness — is an outcome of cinema verité, which attracted a generation of directors, including D.A. Pennebaker, Robert Drew, and Frederick Wiseman. Verité, a development whose modernized incarnation arrived with the innovation of battery-powered equipment, creates the illusion that you’re there because the filmmakers are. With the Maysleses, the subjects are aware, obviously, that the brothers are with them in a motel room, a convertible, or a 28-room manse. But since their presence is rarely dwelt upon, it recedes. It turns into a form of companionship. When, say, one of the men selling deluxe Bibles in 1968’s Salesman turns toward Albert in the passenger seat and starts talking about his fellow salesmen, it’s as much as if he’s addressing someone imaginary as it is an acknowledgement of a movie camera.

Salesman was shot in black and white, which makes it seems as though it’s a decade older. The film follows a quartet of salesmen — the Badger, the Gipper, the Rabbit, the Bull — roving the Miami area, trying to sell Bibles. Watching them march from door to door with only occasional entry and even less success, you can see the end of something. You can see it in the uncomfortable transaction with reluctant, ambivalent housewives and skeptical husbands. You can see it in the drawn faces of the men themselves. Selling Bibles door-to-door is a strange job. It’s a hard job. It’s a job slowly being obviated by whatever it is that Mad Men is all about. The Maysleses present that demise with immediacy. Every once in a while, you truly do forget that you’re watching a movie. There’s this crazy moment in Salesman, for instance, where the Rabbit is at the home of a native Spanish speaker sitting with her kids, and the sale is going poorly, and the Maysleses capture the trick of making the moment feel real. You’re standing over that lady’s table and feeling bad for the salesman and for her and for this whole shitty business. Bibles? In the late 1960s? Really? Somewhere Willy Loman has shed a tear.

1970’s Gimme Shelter complicated that transparency. It was supposed to be a Rolling Stones tour documentary, but when a Hells Angel stabbed Meredith Hunter to death at the free December 1969 Altamont show, the movie became something closer to a therapy session. The Maysleses sit in an editing suite with Mick Jagger and Charlie Watts and everyone else and film the band watching the footage from the tour, which produces a film within the film. Songs from the tour’s date at Madison Square Garden, including the immortalization of Tina Turner (the Stones’s supporting act) as a pioneeringly erotic stage performer, are interspersed with the stuff from the suite, along with the reckoning of Altamont, culminating in a long, upsetting passage at Altamont itself. The movie’s genius is that it has no fixed time. It’s hazily structured, like a traveler’s daydream, with events you remember — in fragments, out of sequence — on the way to somewhere else. It’s a cinematic outpost of so-called New Journalism. At one point, Jagger requests that one of the Maysleses — David, I think — roll it back so Jagger can see, in slow motion, Hunter holding a pistol, and the biker, Alan Passaro, lunging at Hunter with a knife. As meta movie crime evidence, it’s a moment that surpasses Michelangelo Antonioni’s gassy, overrated Blow-Up, whose lack of a rating helped make it a thing four years before.

Gimme Shelter made the Maysleses’ reputations. It also brought them charges of exploitation that followed them to their next magnum opus, 1976’s Grey Gardens, in which they spend days and nights in the fetid mansion of 78-year-old Edith Bouvier Beale and her 56-year-old daughter, Edie. As a production, the scale was the opposite of Gimme Shelter’s, which credited four editors and three assistants, 14 sound people (including the future master sound engineer Walter Murch), and 23 camera operators, among them someone named George Lucas. Grey Gardens was a house with four people, plus an assortment of cats, raccoons, and loosely tolerated visitors.

At the time, the Beales were infamous as cousins of Jackie Kennedy Onassis. In the four decades since the film opened, they’ve become gay icons, fashion muses, and preoccupations of feminists. There’s been a Tony-winning musical, an Emmy-winning HBO movie with Jessica Lange and Drew Barrymore, and a song by Rufus Wainwright. The film has been restored and was rereleased at Film Forum in New York last week. Sunday marked the fifth time I’ve seen Grey Gardens, yet every time feels like the first. The rampancy of squalor and the floridity of mental illness always seem new. Little Edie’s clothes are never on straight, which is what made her iconic. But late in the film, her skirt is on so unevenly that it poignantly doubles as a symbol of a state of mind: sideways. Then there’s Big Edie’s mattress, where she more or less resides, which has turned the color of soil. She and the bed appear to have fused together, like something out of Hayao Miyazaki. The Maysleses call attention to none of these things. You simply notice them, presumably as they do. It’s striking how often they pan toward an old oil portrait of Big Edie, toward anything that points to proof of some of the bygone glamour in Big Edie’s beautiful long white hair and Little Edie’s pinup swimsuits.

The result is a glum enchantment. Time simultaneously ceases to exist and is on the warpath. Little Edie is getting on in years. Her dreams of a husband have all but vanished, the men chased off by Big Edie, who’d otherwise be alone. With a camera, boom, and mic, the Beales’ life together evokes culture: Tennessee Williams doing Dickens for CBS, with Albert and David as a not-unwitting pair of gentleman callers. The Maysleses’ amplification and conflation of comedy and tragedy can break your heart even as you laugh.

The question, of course, is, What’s so funny? That’s a question that has remained with the movie these many years. It’s the question that continues to follow the format’s artists and its reality-show factory workers. I didn’t know what exploitation was in documentaries until a college professor taught verité as an opportunity to present — and inveigh against — its potential immortality. Grey Gardens, with its famous shot of the brothers turning to reveal themselves in a mirror, was the professor’s apotheosis. The Maysleses arrive at the Beales’ doorstop hoping for a story and do nothing to aid two obviously sick women. What’s the point of this kind of false objectivity?

Back then, I didn’t have an answer. But Albert Maysles’s work, his attention to behavior and mood and setting, and his search for those valleys suggest an alternative story of verité, particularly with regard to Grey Gardens. Maybe Albert and David were guilty of a kind of exploitation, but they never took a subject lightly. Exploitation wasn’t their M.O. Finding compelling people was. And to see Little Edie dance toward Albert’s camera, as many others have, is to surmise that, despite himself, he was compelling, too.