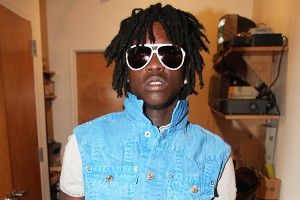 Chief Keef has been in some form of legal trouble ever since we met the young man. At first, it was endearing, myth-building stuff: “Hip-Hop’s Next Big Thing Is On House Arrest at His Grandma’s,” that kind of thing. Quickly, it turned grisly and ugly: In September, when a rival Chicago rapper named Lil JoJo was murdered while riding on the back of a bicycle, Keef sent out a leering, ugly tweet, which led to a Chicago Police Department investigation into his possible involvement in the killing. Now it’s just getting bizarre. As the Chicago Tribune reports, Keef was jailed on Tuesday for violating his parole. The violation in question? Shooting a video for Pitchfork.

OK, no, not exactly that. What happened was that, back in the summer, Pitchfork got Keef to take part in Selector, a video series they have in which rappers freestyle in random locations. For Keef, they picked a gun range in Manhattan, a decision that quickly backfired: In the backdrop of Chicago’s record 2012 homicide rate, the video was seen as being in poor taste, and was quickly pulled off the site. A statement was released explaining the decision, which read in part, “Pitchfork’s roots are in Chicago and many of our employees and several contributors live in the city. The horror of the gun violence that has plagued our hometown is something we all take very seriously. Many people have pointed out that this episode could be seen as trivializing gun violence, and we feel they have a good point. Given recent news regarding the shooting of Chicago rapper Lil Jojo and the investigation of people involved in Chicago’s rap scene, this seems like the right time to express our regrets regarding that episode.”

Now that same incident has come back to haunt Pitchfork and Keef. According to the Tribune, “Chief Keef’s lawyer, Dennis Berkson, didn’t contest that his client was holding [a] rifle [in the video], but he argued Tuesday that the rapper did not break the law because he was merely holding the weapon to promote his album, which was released Dec. 18 … ‘It was a promotion. Just like a movie,’ Berkson said. ‘There was no intent on his part to possess a gun.'” Alas, “the judge ruled that by holding the firearm, Chief Keef violated the terms of his 18-month probation sentence for pointing a gun at a Chicago police officer in 2011 … After the judge ordered him taken into custody, Chief Keef emptied his pockets and handed his cellphone to his uncle.”

Pitchfork has yet to comment on Keef’s probation violation, although what could they really say? They’ve already apologized and retracted the video, a move now only more justified by this new situation. Some will surely use the occasion to reengage in the debate around Keef, and the complicated fact of his embrace by media outlets — Pitchfork, most notably — that aren’t primarily hip-hop publications. Meanwhile, Pitchfork has to figure out exactly how they found themselves in this situation. First order of business, hopefully: an internal order for more laser tag videos.

And, for now, Keef awaits his sentencing, which will be handed down Thursday. Says Keef’s grandmother, “I don’t play Jesus Christ like y’all do. We don’t know what Thursday will bring us.”