‘Orange Is the New Black’ Gets a Third Season 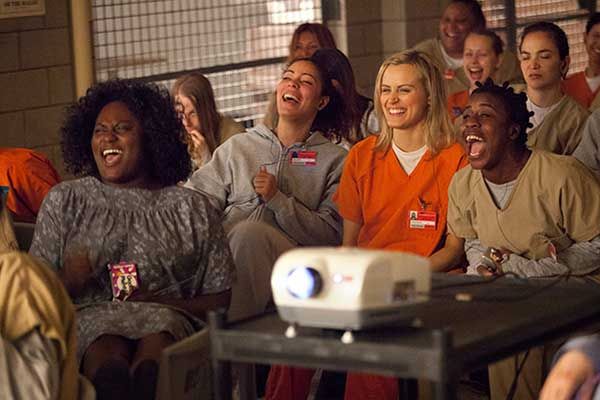 A month before Season 2 even premieres, Orange Is the New Black has been renewed for a third go-round. Before being officially confirmed by Netflix, the news arrived via Laura Prepon’s Instagram. That’s a great segue into mentioning how Prepon was recently reported to be in the mix for a major Season 3 role after having her part reduced for Season 2. Now it looks like that’ll happen, and it appears we can look forward to another incredible trailer about a year or so from now.

The LACMA live-read of Quentin Tarantino’s The Hateful Eight — the movie that might never become a movie — spawned a cool movie poster you can buy.

This Chief Keef video gets really mental around the 2:30 mark. [via]

Brad Pitt and Angelina Jolie are doing a new project together. They might not act in it, but it’s their first time collaborating since Mr. and Mrs. Smith. Angelina wrote the script.

Adele’s new album might be called 25, is probably coming later this year.

Star Wars Video Dept., Entry 2:  J.J. Abrams and Lawrence Kasdan know all about “May the Fourth be with you.”

Where was Josh Hartnett all that time?

Moviefone is drastically redesigning itself and going after TV Guide’s lunch.

Here’s a new one from Usher, Good Kisser.


Diane Keaton on the Woody Allen mess: “I have nothing to say about that. Except: I believe my friend.”

And lastly: Why is Drake so memeable?