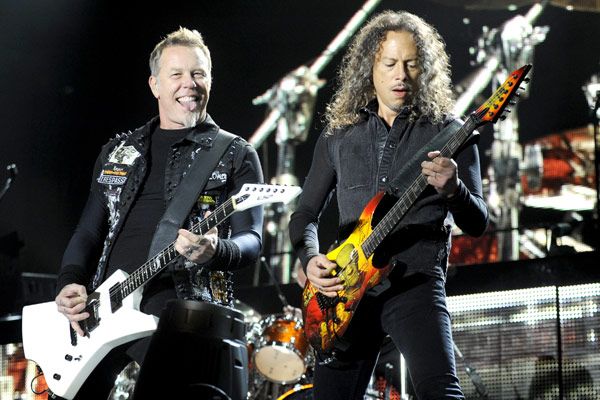 No matter what happens between today and the Apocalypse, two things will forever define Metallica in the minds of casual-to-decently committed fans: (1) The unimpeachable greatness of its first three albums (possibly four if you love And Justice For All and hate audible bass sounds); and (2) the time they decided it was a good idea to sue their fans in the late ’90s. Everything that’s written about Metallica is colored at least a little bit by one or both of these items. Metallica knows this, and yet the band hasn’t accepted that its history is already written. Now solidly in the third act of its career, Metallica has refused to join the “mediocre late-period album plus lucrative greatest hits tour” cycle that most bands of its stature inevitably succumb to. Instead, they’ve gleefully launched project after project distinguished by massive miscalculation and riveting, almost-certain awfulness. Twenty-first century Metallica can’t exactly be described as “great” or even “mentally competent,” but it’s definitely not boring or predictable.

This phase of Metallica’s career arguably began with 2003’s St. Anger, but it truly culminated with 2011’s Lulu, the phantasmagoric, blood- and semen-drenched would-be theater piece that caused armchair physicians everywhere to diagnose co-conspirator Lou Reed with varying degrees of dementia. The band’s forthcoming 3-D film, Metallica: Through the Never, steps back a bit from the ledge of Lulu-esque insanity, but it’s still a head-scratching proposition: Through the Never will be (as expected) a concert film culled from performances done last year in Vancouver and (as not expected) some kind of backstage action-thriller about a roadie (played by Dane DeHaan, co-star of the upcoming The Amazing Spider-Man 2) “who is sent out on an urgent mission while the band is playing a rousing live set in front of a sold-out crowd and unexpectedly finds his world turned completely upside down,” Spin reports.

We have no problem with roadie-related subplots being shoehorned into movies starring metal dudes. (Wayne’s World 2 is a classic of this micro-genre.) And Lars Ulrich likening Through the Never — which is directed by the immaculately monikered Nimród Antal of Predators fame — to the historically nonsensical Led Zeppelin movie The Song Remains the Same pretty much ensures we’ll see it opening weekend. But, c’mon, in what universe is combining an action film with a concert movie a good idea? Is there any chance Through the Never won’t be Metallica’s Kiss Meets the Phantom of the Park? Could we be more excited at the proposition?

Through the Never will be released in theaters on Aug. 9.