A Man in a Hat: The Justified Season 3 Finale 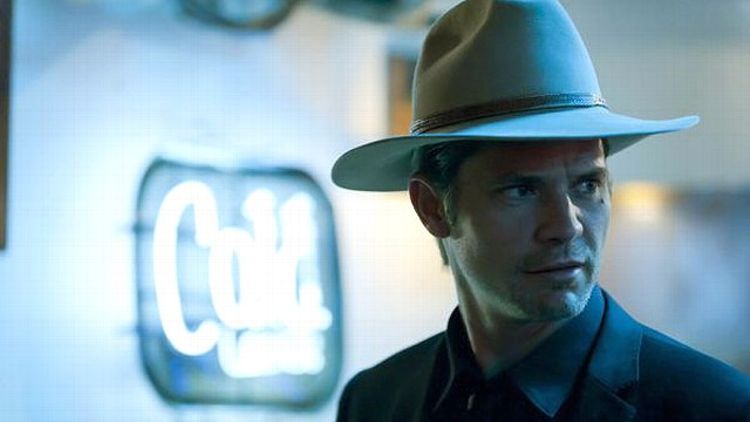 The shooting of Tom Bergen and the escape of Robert Quarles has pretty much every character on edge, on empty, and carrying a full clip. “Slaughterhouse,” the finale of Season 3: Praise the lord and pass the pork tongue.

Raylan is on one. Tom Bergen doesn’t make it, and the Marshal is out to avenge his colleague’s death, staring down Boyd, playing Harlan Roulette with Wynn Duffy, having another porchetta-themed, semiautomatic negotiating session at Noble’s Holler and generally looking like someone who woke up on the wrong side of the bed and is ready to kill over it.

“Guy Walks Into a Bar”

“When the Guns Come Out”

Boyd also has his hands full, getting Arlo back on his meds and having misty meetings on the bridge of sighs with Limehouse and his band of butchers. He’s also haunted by a devil. Or rather, Devil. Boyd and Arlo put the mutinous crew member six feet deep earlier in the season, and now it’s coming back to bite them in the ass, right when they need it least.

For his part, Quarles is making friends and threatening people. He’s kidnapped a single mother and her two well-adjusted kids on their way back from a Christian rock festival and is treating them to threats of gun violence, personal anecdotes about his dead mother, and some serious Oxy withdrawal.

This being Justified, this isn’t going to end up with some sort of multi-agency task force getting to the bottom of a case. It’s Raylan Givens’s one-man band, and when Quarles makes a request for his presence, solo, the Marshal obliges. Raylan pretty much willingly walks himself into being another hostage along with the two boys from the Christian rock family. And everybody — Pete, Mitch, Raylan, and Quarles — takes the DC Talk van up to Noble’s Holler. Because that’s where everyone seems to go when they are engaged in criminal conspiracy.

The showdown goes down — where else? — in the slaughterhouse, which we know because the episode is called “Slaughterhouse” and because A LOT OF STUFF HAPPENED IN THE SLAUGHTERHOUSE this season. It looks like Quarles is going to get money from ransoming Raylan back to the Noble’s Holler crew, and then he is gunned down by an exiled Errol and has his arm cut off by Limehouse, who finally uses his butcher’s knife for something other than a conversational prop.

With his dying wheeze, Quarles tells Raylan that Arlo was the trigger man on the Tom Bergen shooting.

In the end, Arlo, out of kinship or because he was conned, takes the fall for Boyd, claiming both Tom Bergen and Devil’s murders as his own. (Only one was.) Raylan recounts the whole story to Winona, who is now pushing the limits for how many times someone can feasibly be seen in a nightgown. Even his funny office joke (“They say I disarmed him”) can’t bend her sisters-doing-it-for-themselves-spirit. Raylan is sent out into the Kentucky night, wondering whether Arlo would’ve pulled the trigger had it been him.

MVP: Boyd. It’s going to be quite a feat if Graham Yost turns Boyd into Season 4’s main heavy since, despite everything, he has become so likable this season. Where I sometimes felt like certain characters seemed to change directions with little or no logic or warning, everything Boyd did this season seemed at one with the searching, lost-and-found-and-lost-again nature of the character. I thought Goggins — who occasionally forgets that he is, in fact, not on Deadwood, despite the preponderance of actors from that show — has been consistently great. Loved the delivery of the line, “Raylan, I hope you have enough respect for my capabilities to know that I would not blow up a car that I’m standing next to.” If I’m still not entirely sold on Boyva (ugh) as a couple, I’m all in on Boyd trying to be the criminal patriarch with heart that his father never was.

Villain of the Week: Limehouse. At least he finally got to use the knife.

F-Yeah, Ava Crowder: “You don’t threaten me! And you don’t talk to anybody about anything.”

Best Lines: Raylan: “You think it’s true what they say?” Boyd: “Well, what do they say?” Raylan: “One bad apple spoils the barrel.” Boyd: “Well, Raylan, even in a little town like Harlan, I think the apple barrel is obsolete.”

But I leave you, this season, with the man who has, in so many ways, become my spirit animal: “I have a permit for that in my other pants.” —Wynn Duffy