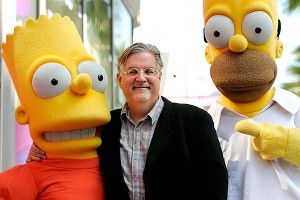 Are you ready to know where The Simpsons‘ Springfield is? Are you sure? The show’s creator, Matt Groening, has, after 25 years, coughed up the answer in an expansive interview with Claudia de la Roca, a former Simpsons and Futurama producer, for Smithsonian Magazine (get it, Smithsonian Magazine). And The Truth! May! Shock You! No, actually, it makes perfect sense. Mostly, it’s surprising we weren’t all already assuming that it was that Springfield. OK, sorry, sorry. On to the big reveal:

OK, why do the Simpsons live in a town called Springfield? Isn’t that a little generic?
Springfield was named after Springfield, Oregon. The only reason is that when I was a kid, the TV show “Father Knows Best” took place in the town of Springfield, and I was thrilled because I imagined that it was the town next to Portland, my hometown. When I grew up, I realized it was just a fictitious name. I also figured out that Springfield was one of the most common names for a city in the U.S. In anticipation of the success of the show, I thought, “This will be cool; everyone will think it’s their Springfield.” And they do.

There you have it: The Simpsons’ Springfield is the one near where Matt Groening grew up. So why say so now? According to EW, the show will “reference the revelation about Springfield’s origins. Expect Sunday night’s opening chalkboard gag to have some fun with this news.” On Twitter, Homer’s already dropping yuks: “Congratulations, Oregon. Your taxes will pay for my jail time.”

By the way you should read the whole interview, as Groening goes into detail about how he mirrored the show, in subtle ways, on his own life. For example, “I very early on named a lot of characters after streets in Portland. I thought it would be amusing for people in Portland to be driving past the alphabetically laid-out streets. There’s Flanders, Kearney, Lovejoy, mostly in Northwest Portland. My goal was to name every character after streets in Portland, but we were in a hurry so I dropped that idea.” (There’s also this, which, wow: “My father ended up as a bomber pilot flying a B-17 during World War II. After the war, he was a surfer, filmmaker and ardent amateur basketball player. He perfected a basketball shot that he could shoot — without looking — over his head and consistently make from the top of the key. He made that shot for 30 years.”) OK, who’s ready to exploit this news for money with me? I’m pretty sure a 1-for-1 recreation of Flanders’s Leftorium in downtown Springfield, Oregon, would slay. Interested investors, please leave your information in the comments.

Filed Under: Television, The Simpsons, TV

A Man in a Hat: The Justified Season 3 Finale

Anyone Want to Direct the Hunger Games Sequels?