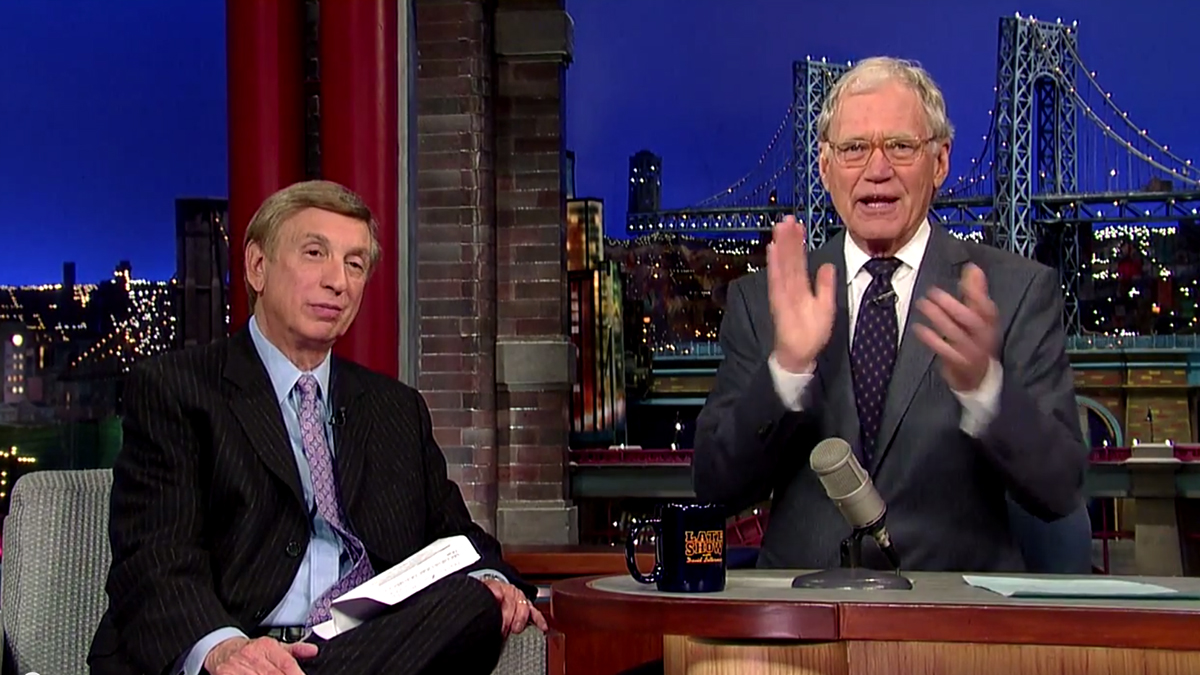 We’ve reached the point in the Dave Letterman farewell tour where stuff is beginning to disappear forever. Thanks to Deadspin’s Timothy Burke, I learned that Marv Albert went on The Late Show last night and presented a final Albert Achievement Awards. For me, it’s a far greater loss than the last “Christmas (Baby Please Come Home).” Darlene Love will croon into the wintry future. But last night, it felt like we bid farewell not just to the Achievement Awards but to the sports blooper itself, an ‘80s artifact in which fans were once held rapt by what Albert called “the wild and the wacky.”

To appreciate the Albert Achievement Awards, you have to understand what a commodity the blooper used to be. Thirty years ago, funny sports moments were not instantly blogged. They were harvested by producers — like Albert producer Dave Katz — and then unloaded on the public in big, semi-annual bumper crops. On your local stadium Jumbotron. On Bob Uecker’s Wacky World of Sports. On Dazzling Dunks and Basketball Bloopers. In the VHS Era, any aggregated collection of sports highlights was pretty incredible. One of the many things the Naked Gun parody got right was how stadium crowds used to treat the nightly blooper dump like we now treat “God Bless America.”

A funny thing about sports bloopers: They were often the same bloopers, played across America in an endless loop. Other than Albert, few announcers actually bothered to name the participants or specify when or where the thing happened. A young Bryan Curtis could believe that outfielders were running through walls every night. But the easy familiarity of the blooper — along with its goofy-uncle branding: “football follies,” “boxing blues” — is what made it great. Bloopers were the 1,001 Knock-Knock Jokes of sports.

Marv Albert was a blooper tastemaker. He had a Borscht Belt sensibility that Letterman could use for his own devices. (The segment wouldn’t have worked with Warner Wolf.) Once, Albert asked Letterman what he would change about baseball. Letterman replied, “I think fans should have easy access to the team bus. Kind of go through their personal belongings while they’re out there playing. That would be something that would enhance the enjoyment of the game for me.” That was basically the comic key of the Albert Achievement Awards.

Albert did bloopers on Letterman beginning in 1986. He only occasionally wore a tie. Letterman introduced him by saying something like, “[Albert] has appeared on this program more times than any other single guest” — an honorific that peaked in Albert’s immortal “what happens if a Late Night guest doesn’t show?” gag. Albert would tell Dave something like, “It has been a wacky kind of year.”

There would be a nod to Dave Katz and the “crack” staff of producers. Then: Are we ready? Yes? Here we go … From the world of boxing, Tony Wilson’s mother enters the ring and attacks his opponent with a shoe. A dad uses his infant son to scoop up a ground ball at Fenway. The Royals’ Kevin Seitzer tries to blow the ball foul …

Albert would narrate the clips in rigorous deadpan while Letterman cackled in the background. (On last night’s show, it was notable that Letterman was actually laughing rather than emitting the fake chuckle of end-stage Late Show.) You can tell the various editions of the Albert Achievement Awards apart only because Albert’s hair changed from episode to episode. Most of the bloopers seemed to have been filmed with 7-Eleven security cameras, an aesthetic befitting Late Night itself.

More? Sure! To the world of hockey, where Marty McSorley gets into a non-fight for the ages. Joaquin Andujar beating up a toilet. The New Jersey Nets’ mascot, “Duncan,” hits a kid in the face with a ball …

The blooper reel brought certain annual rites, as if players were conspiring to appear on it. How was there nearly always a quarterback who lined up behind the guard rather than the center? A boxer who swung and smacked the referee instead of his opponent? Someone would get hit in the nuts. “Always a crowd-pleaser,” Letterman would say after a rich edition. There were also strange connections to be made between the bloopers. Everyone remembers Jose Canseco taking a fly ball off the head. I didn’t remember that the same thing happened to Roberto Kelly — twice. But Marv did.

The actuarial tables tell us that a piece of 1980s culture will die roughly every three days. Another one died last night. Thanks, Marv, as always, for being there. We’ll be right back after this with Todd Rundgren …