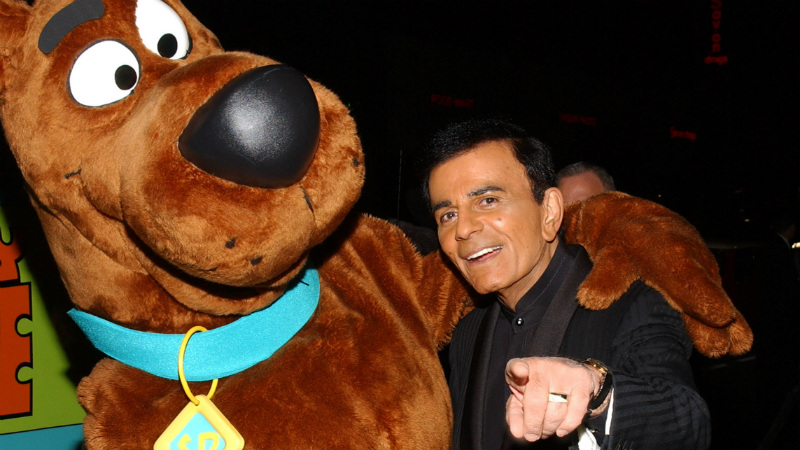 Here are some things that happened in the four decades between 1970, when Casey Kasem first started hosting a syndicated radio show that counted down the top pop songs in the country, and 2009, when he retired: The culture became coarser, more fractious, more distracted. Radio stations scrambling to prove their worth to advertisers broke already-splintered demographics further down, into splinters of splinters, the protons and neutrons of brand affinity. The definitions of phrases like “pop music” and “Top 40” and “rock star” grew progressively muddier.

None of this occurred because of Kasem; he seemed to exist in spite of it, or maybe in defiance. Every Top 40 countdown Kasem hosted was a news report from an alternate America that was simpler, cheerier, and less fragmented, a republic of consensus where a hit was still a hit and people still professed their love for one another by calling in requests to nationally syndicated radio shows.

Kasem also provided the voice of Shaggy to four decades’ worth of Scooby-Doo cartoons, which may end up being his most lasting cultural footprint. (“They are going to be playing Shaggy and Scooby-Doo for eons and eons,” he told the New York Times in 2004. “And they’re going to forget Casey Kasem.”) He was Robin on Super Friends. He was Alexander Cabot III on Josie and the Pussycats, and he appeared in a number of feature films that sound like projects you might remember Troy McClure from — The Girls From Thunder Strip and The Incredible 2-Headed Transplant and Soul Hustler and The City That Forgot About Christmas. He played someone named “Spacy Kasem” on a 1996 episode of Homeboys in Outer Space. I leave it to you to decide what’s more amazing about that credit — that the makers of this short-lived UPN sitcom decided they needed to cast the actual Casey Kasem in order to make that dumb joke land, or that the actual Casey Kasem made himself available to do it.

Kasem died early Sunday morning at a hospital in Gig Harbor, Washington. He was 82, and suffered from Lewy body disease, one of the most common forms of progressive dementia that isn’t Alzheimer’s. Kasem’s wife, Jean, and his three children from a previous marriage spent the weeks before his death in a nasty public argument over Kasem’s quality of life, the impending disbursement of his $80 million fortune, and whether Maxim counts as porn. At one point, Kasem was briefly reported missing, although it turned out Jean had either taken him on vacation or kidnapped him from his Santa Monica hospital room at great risk to his health, depending on whose side of the story you heard.

And so it came to pass that some of the last antemortem news stories written about a broadcaster long synonymous with familial sentimentality and spackle-smooth professionalism contained phrases like “angrily hurled hamburger meat,” “seedy and demeaning pictures,” and “70-year-old Vietnam vets in leather chaps.”

Of course, the comforting even-keeledness with which Kasem served up four decades’ worth of hits, trivia, and cloying Long Distance Dedications on the radio was to some extent a mask. “I shouldn’t say this, but he was a screamer,” his first wife, actor Linda Myers, told The Hollywood Reporter earlier this month. His temper was already the stuff of legend, revealed most famously in a 1985 recording of Kasem flying off the handle while recording a dedication segment.

A Cincinnati, Ohio, man whose family had lately buried “a little dog named Snuggles” wanted Kasem to play Henry Gross’s song “Shannon,” a lugubrious country-rock ballad about a dead Irish setter. Something, Kasem said, “that we can all relate to, whether we have kids, or pets, or neither.” It was a big fat banal pitch for him to whack over the fence. Except that Kasem was being asked to pivot into pet-mourning mode while coming straight out of the Pointer Sisters’ “Dare Me,” which is a veritable geyser of funk and fun and rubber-band bass-pops. It was clearly not the first time Kasem had brought this issue up.

“See, when you come out of those up-tempo goddamn numbers, man, it’s impossible to make those transitions, and then you gotta go into somebody dying,” he said.

“You know, they do this to me all the time,” he continues. “I don’t know what the hell they do it for, but goddammit, if we can’t come out of a slow record, I don’t understand. Is Don on the phone? OK. I want a goddamn concerted effort to come out of a record that isn’t a fuckin’ up-tempo record every time I do a goddamn death dedication … I want somebody to use his fuckin’ brain to not come out of a goddamn record that is, uh, that’s up-tempo, and I gotta talk about a fuckin’ dog dying.”

The clip got passed around, in a pre-Web hand-to-hand kind of way, along with another snippet of Kasem losing his temper while mellifluously intoning the given names of the members of U2 and snapping, “These guys are from England, and who gives a shit?” Both recordings were later sampled by San Francisco found-sound pranksters Negativland on an EP they made the somewhat calculated mistake of entitling U2, which led to a complex three-way legal battle between Negativland, SST Records, and U2’s label, Island Records, and also led to the book Fair Use: The Story of the Letter U and the Numeral 2, complete with a foreword commissioned by the band from the son of actual U-2 spy-plane pilot Francis Gary Powers.

The Kasem tapes were an irresistible cult object because they captured the sound of a supposedly consummate pro losing his shit over something picayune, something the Internet would eventually render utterly unremarkable. But they also suggested that Kasem was human, and maybe even possessed personal taste. They belied his reputation as a yes-man for the monoculture in a way that made you like him more, not less. You know, they do this to me all the time.

These days we expect our cultural gatekeepers to be superfans first. But maybe it was better that Kasem didn’t really seem to care that much about music, beyond what band-bio facts fit on the index cards put before him. (“And we’re just one tune away from the singer with the $10,000 gold hubcaps on his car,” Kasem said while teasing a Paul Revere & the Raiders song on his first show.) His lack of apparent preferences left generations of listeners with no choice but to develop their own. 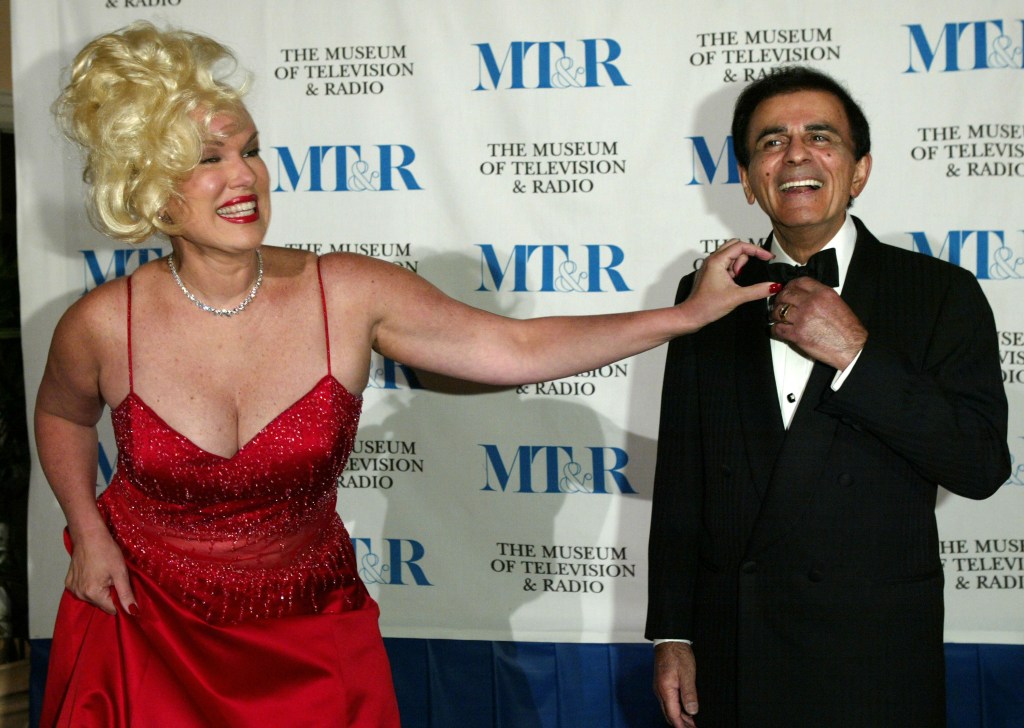 And it’s not like there weren’t things he did care about. He spoke out regularly against the stereotypical portrayal of Arabs in popular media — Kasem, born Kemal Amin Kasem, was born in Detroit to Lebanese immigrant parents who owned a grocery store — and once quit a voice-acting job on the Transformers cartoon in protest upon being handed a script set in the fictional nation of “Carbombya.” He was also a vegan and a vocal critic of factory farming, and when he temporarily gave up his Scooby-Doo gig in the mid-’90s, it was because he’d been asked to do a Burger King ad in the character’s voice. (He returned to the gig in 2002, but only after producers agreed to make Shaggy a vegetarian.)

In 1989, Casey and Jean Kasem entertained Nikki Finke — then a sharp-toothed, young Los Angeles Times reporter — in their seven-room Beverly Wilshire Hotel apartment, from which the Kasems were organizing a housing-crisis march. “The boss sits in a marbled-to-the-max kitchen,” Finke wrote. “The boss’s wife toils in a satin moire-draped dressing room. The publicists make phone calls from the exercise gym. And the typists pound their keyboards on a priceless buffet table that seats 12.” Later, Kasem is described as “more likely to be listening to a speech by Malcolm X on his cassette player than music by Miami Sound Machine.”

It’s hard to square the image of Kasem edutaining himself via the words of Brother Malcolm with, say, the story — mentioned in this Washington Post obit — about Kasem agreeing to change his show’s chart methodology in the early ’90s in order to mollify affiliates who wanted nothing to do with hip-hop even as it became a commercial force. Kasem began basing his list on airplay data from the country’s biggest Top 40 stations rather than the sales chart in Billboard; it was probably a choice he was forced to make, but the truth was he had never sounded entirely comfortable back-announcing “O.P.P.” or “Rump Shaker.” You can only hurdle so many generation gaps before your ankles start to give out.

Still, Kasem provided a point of entry to the bewildering world of popular music for a lot of people, and young people in particular, who went on to love music more than he ever did. He was one of the least rock-criticky people who ever played records for a living, but he undoubtedly turned countless people into rock critics, trainspotters, trivia banks, and maintainers of eccentrically ordered personal Hot 100s. What we’re mourning when we mourn him, beyond that, is the passing of a time when a ranked list of popular songs still seemed capable of revealing something about what songs actual people actually liked.

In the time it took me to read one Billboard.com article about Casey Kasem’s now-widow throwing meat at her stepchildren, I watched Jason Derulo’s “Wiggle” dethrone Ed Sheeran’s “Afire Love” on Billboard’s Twitter-powered “Trending 140” chart, which ranks “the fastest moving songs shared on Twitter in the U.S., measured by acceleration over the past hour.” Now that paying money for recordings has become the jury duty of pop-music appreciation, we measure twitches of interest, flicks of the eye, spambot-team efficacy. Kasem was the voice of a less algorithmic time, and that’s a hard thing not to feel a pang about — whether you have kids, or pets, or neither.

Freak Show and Tell: Everything You Need to Know About E!'s Plastic Surgery Nightmare