5 Questions on American Idol: The First Ever All-Girl Top 5 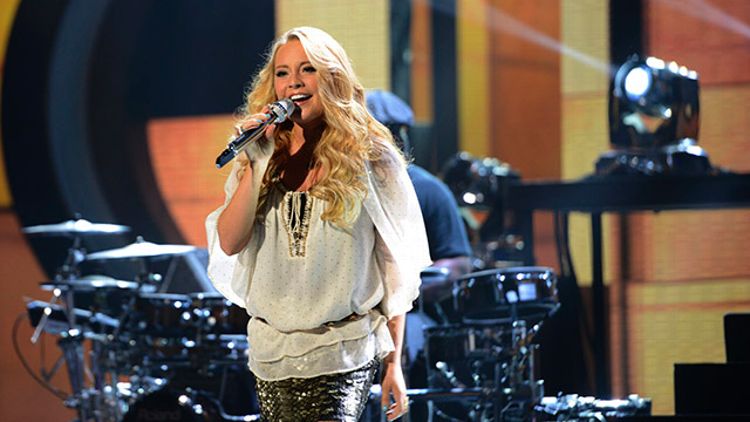 Whatever doesn’t deafen you makes you stronger: Grantland’s Jay Caspian Kang, Mark Lisanti, and Emily Yoshida have returned, bowed but not broken, to tackle another season of American Idol. The boys are all gone, dead. Long live the girls.

Kang: At the start of the show, Janelle was my favorite to win it all and I still stand by my logic: She’s an attractive-but-not-threateningly-attractive girl with a good-but-not-silly-good voice who sings country without a hint of pretense. I imagined her all spangled up during glam weeks, à la Carrie Underwood singing “Alone” in Season 4, or stomping around with pigtails and screeching out the chorus to Martina McBride’s “Independence Day.” I imagined America slowly falling for this innocent girl who radiates good health and an IQ hovering right about (or slightly below) the national average.

So what went wrong? I don’t think it was one thing in particular, but just the momentum created by dozens of small, bad decisions. Like last night, Janelle rightly surmised she might be in trouble and that it was finally time for some Dolly Parton, but for some inexplicable reason, then chose “Dumb Blonde” over “Coat of Many Colors” or “Jolene” or any of the 50 better Dolly songs in existence. Janelle just kept messing up things like that — I still think she could have won the competition, but it’s hard to stay afloat when every decision you make is wrong.

Yoshida: Janelle, Janelle, Janelle. I’d say she helped herself by pandering to the country demographic last night, which is now shockingly only represented by one and a half competitors, but I’m not sure if modern-day country tweens care about Dolly Parton. Dolly is maybe a third-tier go-to on Idol, but I still don’t think people sing her nearly enough, especially because songs like “My Tennessee Mountain Home” are basically custom made for a teenage girl to sing on a cornball variety show while she looks into the camera at her family back home in Arkansas or wherever. So I get very excited when someone says they’re going to sing some Dolly, and I get very disappointed when they make it look like a stupid choice. I think there’s nobody BUT Janelle to go home tonight; Angie bought herself a free pass this week regardless of what she sang or how she sang it by shouting out Boston (which was, no snark, a very nice thing to do), and Candice and Amber both continue to go hard, both with song choices and vocals. Kree might be the only other person in danger, but I only say that because I can’t remember a single thing she did last night.

Lisanti: Janelle is Texas toast. Is she from Texas? I can’t remember, but if not, she is whatever the regional toast-equivalent is. There was huge promise in the “next Carrie Underwood” thing, but she’s pretty much failed to connect on that level, even as the country lobby demands its tribute and has elevated the likes of I’ve Already Forgotten His Name, But You Know, The Beefy Forklift Guy From X Factor to superstardom.

At this point, the other four remaining girls have lapped poor Janelle. They’re all better singers, and the judges have already decided Kree’s going to be Idol‘s unilateral inductee into the Grand Ole Opry. That being said, I can imagine a world in which Amber is banished to the tour because (1) the voters have a clear pattern of getting it wrong, and (2) singing a Barbra Streisand song, while an enormous hit with the four people sipping from giant Coca-Cola cups in front of her, may strike the tweens as bizarre grandma-music. That’s how I think of it, and Streisand and I are both old enough to be Seth Rogen’s mother.

Candice is obviously vocally superior to the rest of the top 5, but does she have a career beyond the show?

Kang: I love Candice, but I’m having a hard time figuring out what she could sing that would convey a bit more of her personality and establish her as a marketable pop act and not just a really great singer who happened to be on TV a bunch. Still think Broadway is the best way for her to go. Maybe she can do Grease with Taylor Hicks.

Yoshida: It’s almost disconcerting how clearly I can see Candice perched atop a sparkly red-and-white Coca-Cola float in the Macy’s Thanksgiving Day Parade lip-synching to some uninspired social media–crowdsourced original holiday composition while an army of Rockettes kicks up its heels, but I think there’s a better place for her on NBC prime time. Yes, that’s right … Celebrity Apprentice.

Lisanti: Isn’t it weird how Idol has become the Broadway farm system? Maybe this is the true future of the show. Demote it to some specialty outlet on cable and let it be what it really wants to be: showtunes karaoke. Its odds of actually discovering and grooming a viable pop star would probably remain the same, and all the contestants destined for middling Broadway careers would have a more direct path to their destinies.

That being said, I have no idea what to do with Candice. Part of me sees a Jennifer Hudson path. The other part sees a semi-depressing fate of annual performances on Idol results shows, plugging her flailing album or Glee cameo or Wicked run. She’s cursed by being the most talented singer left. They never win. Not that winning is any great gift anymore. Every sentence here is more depressing than the last. I hope Candice will be OK. Maybe she can go live with Ryan Seacrest; he has 28 spare bedrooms in his castle. He eventually kills and eats all of his guests, but you’re treated well while you’re slowly being prepared for dinner.

The judges were very generous with the standing Os last night. Deserved?

Kang: It’s like a middle school poetry slam these days. They need to glue Keith Urban’s ass to the seat. I’m pretty sure this is all his fault — he stands up and everyone else has to follow suit.

Lisanti: I like the standing ovations because they help me figure out how to feel about a performance. “Oh, that was pretty mediocre, I don’t know … [Judges stand and applaud wildly.] Wow, she really killed it! How many tight yellow T-shirts with horses on them does Keith Urban own? Gotta be like 30, right?”

Yoshida: Let them stand. Frequent leg stretches are not a bad thing. At least Randy’s finally given up declaring this to be the BEST SEASON EVER DAWG every single episode, because nobody believes it is, nor expects it to be anymore.

Angie decided to sing “Halo” for her Diva Song last night. How did this fit in/rate with the Angie Miller Brand?

Kang: Is there an Angie Miller brand outside of “sits at piano with tousled hair?” Because if that’s a brand, my parents really should have capitalized on Jay Kang circa 1991.

Angie Miller is a try-er. She clearly tries very hard at everything she does and I have a huge soft spot in my heart for people like that, but I also understand why they grate on the public, especially when what they’re trying to do is give really earnest Oscar speeches or something like that. When you’re a try-er and you feel that all your efforting isn’t swaying the people, it’s important to just relax for a bit and regroup. What you shouldn’t do is bleat your way through “Halo,” the greatest R&B song since Whitney’s “I Have Nothing.”

Yoshida: Is Angie getting scared? “Halo” seemed like a weirdly desperate move, especially after her first performance was such an ace in the hole. And sure, she turned it out, but there was no transcendent moment like there undoubtedly would have been if Candice took it on. I will echo Jay’s sentiment that Angie is a try-er, but we only call people try-ers when we can see them working (because all five of them are trying, in their own way), and Angie looked and sounded like she was working very hard through the whole song. I feel like making blanket statements right now, so I’m going to say the amount we see/feel someone trying (an arguable factor, sure) inversely determines the level of god-like pop status we bestow upon them. This is why Nicole Scherzinger’s career has been a nonstarter, and why Rihanna continues to make hits in her sleep. Angie has a small shot to win on vocal skill alone, but she never will be immortal.

Lisanti: I think it was a great choice for her. She couldn’t have picked a more fundamentally incompatible diva, but she’d already done the expected bit earlier in the night to remind everybody of the Angie Miller Sitting Behind a Piano Brand, so the change of pace was very effective. She’s trying too hard any time she steps out from behind it — she has no moves when she’s let loose on stage, just a great voice. Try to imagine her in the middle of a choreographed dance number with 10 backup dancers without laughing. It’s impossible. She trips and falls and adorably blows into the poofy bangs dripping across her face and she’s all, “I’m suuuuch a goofball!” and it’s on YouTube within three minutes. Stay behind the piano, Ang. It’s safe there. Maybe just make smoldering eye contact across the vast expanse of the two Steinways separating you and Colton Dixon as you duet on a ballad with a surfeit of resurrection imagery.

Tomorrow is the last night the save can be used. Describe your ideal save scenario, and/or the most likely one.

Kang: I think they’re going to rig it so Candice gets the least amount of votes and then the judges do one of those “WE DONT EVEN HAVE TO THINK ABOUT THIS” things and Randy screams “WE SAVE YOU” and then Candice starts bawling onstage.

As a side note: Who is going to win? I honestly have no idea anymore. Angie? Is she the favorite?

Yoshida: If the producers were smart, they’d have the judges forgo the save altogether — it would be “shocking” and maybe be a trending topic for a few minutes, and it would save us the charade of the Fake Save. That’s not what is going to happen, though. They still have to make it seem like Candice is at any risk at all of not winning, so that even those of us who aren’t shackled to our couches and laptops every Wednesday night will still be in enough suspense to continue to watch.

Lisanti: There should be no save this deep in the season. Last week, they made poor Lazaro sing for his life, and when he stepped to the front of the stage to confront his reckoning, the judges just laughed and laughed and pelted him with raw eggs for 15 minutes. Yes, they were merely expressing the will of the people, but it was a humiliating final moment for someone bravely chasing an unattainable dream in the most musically unpleasant way possible.

Now the both of you are imagining the judges egging Angie tonight, aren’t you? You’re monsters. I’d use the save on your souls. JK, just for Emily. Kang’s beyond help.

Jay Caspian Kang has a beautiful perm.
Emily Yoshida really has it in for Nicole Scherzinger, it’s kind of weird.
Mark Lisanti will also save Kang’s soul; he wouldn’t leave him out like that.