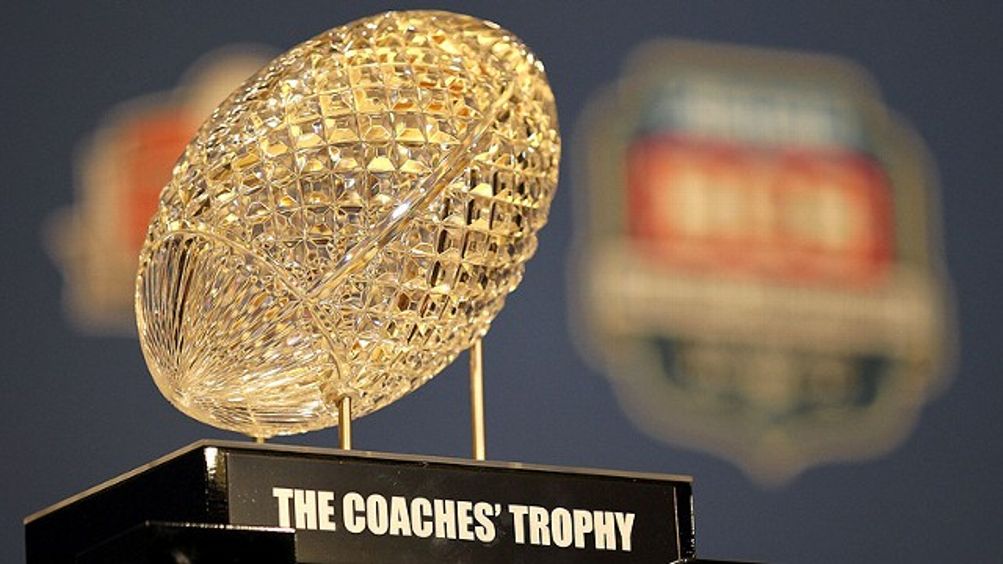 The argument commenced on a fall afternoon in 1869, on a grassy pitch near the state university of New Jersey. What they played back then wasn’t quite football, but a hybrid of rugby and soccer and The Hunger Games — 25 players per side, the ball advanced only by beating or kicking it with fists and feet and heads. The two teams whaled on each other until a total of 10 goals were scored, and after their 6-4 loss, Princeton’s players were literally run out of town by Rutgers students, leaping into their carriages and wagons and hastening the 20 miles back to campus.

One week later, on the Princeton campus: a rematch, and an 8-0 victory for the home team, under slightly different rules. A third game was scheduled, but after protestations by the faculty of both schools that the games were interfering with student studies, it was canceled. Retroactively, a pollster and mathematician named Richard Billingsley declared Princeton the winner of the national championship, because its victory came later in the season; retroactively, a historian named Parke Davis named Rutgers and Princeton co-champions. The entire 1869 college football season consisted of two games, and yet there is no consensus national champion.

And so here we are, seven score and three years later, and nothing has changed: LSU beats Alabama, and Alabama beats LSU, and the season is deemed complete, due to the convenient cover of an academic calendar that only seems to take precedent in the early weeks of January, when every student is busy dropping electives anyway. Alabama is declared the official national champion, despite four of the six BCS computer polls finding that Alabama should not have even been afforded a rematch with LSU in the first place.

Confusion, frustration, bureaucracy, regionalism: It is so built into the infrastructure of college football that it is difficult — and even daunting — to imagine what it might look like if and when the argument is actually resolved.

I grew up with the argument, like my fathers and forefathers did, and I presumed the argument would always be a part of my life: Man would embark for faraway planetoids and Led Zeppelin would embark on a reunion tour and college football’s end result would forever be muddled by the whims of overfed Orange Bowl executives and an undead Jim Delany. But this offseason, a serious and sustained groundswell of support for a four-team playoff has emerged, to the point that people have begun to argue over the logistics of the idea rather than the idea itself. It’s starting to seem like a college football playoff (perhaps beginning as early as 2014) is a foregone conclusion, which is a statement so shocking that I’m afraid to even write it out loud for fear I might be going insane. “I didn’t think I’d ever see it in my lifetime,” says Tex Noel, executive director of the Intercollegiate Football Researchers Association.

Noel has done extensive research into college football prior to 1937, which is about the time media polls became the de facto determinants of the national champion. In 1936 alone, according to Noel’s research, there were 14 polls and six different national champions. Ambiguity has always been a central part of this process; in the early days, this meant a number of different schools could lay claim to a championship, which seemed to make everyone happy. Over the course of the 20th century, national championships have been awarded by economics professors1 and sportswriters2 and coaches3 and computer programs4 and presidents of the United States,5 but the argument has persisted. The BCS — a desperate attempt to reconcile the bowl games with the zero-sum solution fans had been clamoring for — is merely the latest utterly imperfect vessel, a fact that even Richard Billingsley, whose computer poll is part of the BCS formula, admitted to me.

Billingsley is vehemently anti-playoff, though he insists this has nothing to do with his ties to the BCS. Despite his propensity for numbers, despite the fact that Billingsley has been using computers to rank college football teams since the early 1970s, his feelings about this are largely emotional. “To me, there’s nothing wrong with college football,” he says. “There’s nothing like it in the world. It angers me when people try to put it into a mold it doesn’t fit into.”

I spent 45 minutes on the phone with Billingsley, engaged in both a historical discussion and a friendly back-and-forth about the prospect of a four-team playoff. Some of our difference of opinion, I imagine, is generational: By the time I started following the game in the late 1970s and early 1980s, the arguments for a playoff had been firmly established. It struck me more as a frustrating peculiarity of the game I loved rather than a quaint nod to tradition. Billingsley’s contention, as best as I can tell, is that there is no perfect method for choosing a champion, so why not embrace the peculiarity of college football’s system?

And so it went. He asked me whether I thought the Giants were the best team in the NFL last season. I told him no, but that wasn’t really the point of a playoff. Then I asked him whether he thought Alabama was the best team in college football last season. He said yes, then he admitted that the Billingsley poll, at the end of the regular season, had ranked Oklahoma State no. 2 and Alabama no. 3.

Which meant that, according to his own system, the best team in the nation would not have even played in the BCS Championship game.

The argument has always been about preservation: Of the regular season, of the bowl games, of the notion that college football still embraces those eroding tenets of amateurism that somehow set it apart from reality. Until the early 1900s, most “polls” were fraught with regional bias, weighted heavily toward Ivy League schools.6 Until 1968, a tie game was a tie game; overtime was an excess the pros (and the high schools) embraced. Until 1968, Billingsley says, the Associated Press poll did not factor bowl victories into its national championship decision;7 the coaches’ poll didn’t take bowl games into account until 1974.

By then, college football had taken on tremendous cultural importance, especially in the South; by then, college football had become big business for the television networks. But there has always been a reluctance to acknowledge these things (and the corruption they engender), or to at least balance them out with a stubborn nod toward traditionalism. The case for preserving the unique “bowl tradition” rages even as books like Death to the BCS unveil the breathtaking corruption of some bowl officials. And the perpetual argument over a national champion has allowed us to preserve that papier-mâché veil of amateurism, even as we come to realize that amateurism is not a sustainable or equitable concept in the modern world.

And so there is a persistent belief among the traditionalists that college football’s uniqueness actually lies in its central argument, and that eliminating it would taint the entire product. It’s not like I don’t get it at all: There is something weirdly beautiful about the ambiguity of college football’s national championship process, in the same way there was something beautiful about Tony Soprano fading to black. It hearkens back over the years, over more than a century of American history, all the way back to that pitch in New Brunswick in 1869.

“I just … I think it’s jumping the gun,” Billingsley told me about the four-team playoff, and when I asked him how waiting 143 years could be considering “jumping the gun,” he laughed and changed the subject. We went back and forth some more, and then we hung up, agreeing to disagree. I don’t know if we resolved anything, but at least it felt like we were making progress.