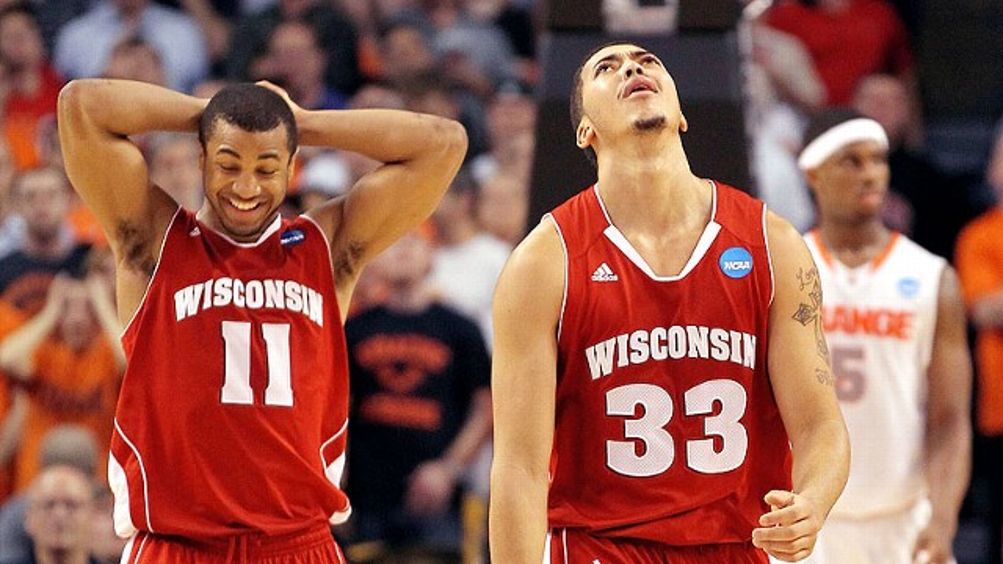 We will have plenty of time to talk about Syracuse. They’ll be back Saturday, with all their talent and all their history, and all the baggage that comes with all that talent and is accumulated through all that history. (Speaking of talent and history and baggage, Derrick Coleman, who got 19 rebounds for the Orange in an NCAA title game 25 years ago, was in the arena last night in Boston. He is now approximately the size of an oil derrick.) Let us pause for the moment and say good-bye to the Wisconsin Badgers, whose dogged play is so damned counterintuitive that it subverts everything it touches, even the box score.

They had the last shot at it, a deep 3-point attempt by guard Jordan Taylor with three seconds left that bounced away toward the right corner, where it was corralled by Josh Gasser, the Syracuse rebounders having apparently vanished. Gasser had one second to toss up a fall-away floating gimcrack that went wide, and Syracuse managed to win, 64-63, in a game in which their inability to put matters away made them positively Romneyesque down the stretch.

(Case in point: Wisconsin presses full-court approximately once per century. With 31 seconds left, they slapped it on, and Syracuse nearly turned the ball over three times before finally settling into an offense that ended in a missed free throw, which set up Wisconsin’s last chance to win. Those 31 seconds are why every college basketball coach is a crazy person who needs enough Thorazine to stun a bull hippo.)

Now, as to the box score. Wisconsin hit 14 3-point shots in 27 attempts. In one critical stretch in the second half, when Syracuse appeared to be able to score practically at will off the dribble, the Badgers hit six 3-pointers in a row, keeping the game close at 56-all with seven and a half minutes left. That stretch is what kept the game close for the rest of the way, since Syracuse thereby declined to score for the game’s final three minutes and 50 seconds.

It would be easy — and perilously close to rancid — to posit this game as having been one in which raw talent was matched against pluck, and grit, and teamwork, and all of those other basketball terms that you don’t need the Enigma machine to decode. The fact is, for most of the game, Syracuse ran their offense coolly and with great efficiency, especially through their guards. They recognized the Wisconsin vulnerability against the drive, and they exploited it almost at will. Hell, they shot 55 percent for the game and hit only five 3-point baskets.

And, as for Wisconsin, it takes great basketball ability to play within the system Bo Ryan has established in Madison, bleeding the shot clock on every possession, chipping out layups off feeds from the high post, and swinging the ball from one side to another and back again, waiting for that one slow defensive rotation that opens up a 3-pointer. One system is not better than the other. The players in one system are not smarter than the players in the other. The fundamentals of one are different from the fundamentals of the other, and both of these teams were fundamentally sound because basketball’s fundamentals are vast. They contain multitudes.

On the first four Wisconsin possessions, the Badgers ran the shot clock down to within three or four seconds of a violation. Each time, they got a good shot. They hit two of them, the last one a 3-pointer by Jared Berggren at the top of the key that qualified as a jump shot only in the most generous sense. Berggren would not miss a shot all night, and he was the story of the game, not only because he is a perfect fractal of his team, but also because he was the one to whom almost everything in the game, for good or ill, seemed to happen.

“At the end of the day,” he said when it was through, talking down in the general direction of his shoes, “it just hurts. You sit here and you know there’s no practice tomorrow. There’s no game next Saturday. It’s done. It’s just done.”

At the end, at the nervous end of it when Wisconsin swung the ball around, trying to get the Syracuse zone to move just that one sliver of a step in the wrong direction, and Jordan Taylor wound up taking a difficult shot that bounced away, and Josh Gasser couldn’t make his hope-flip from the baseline drop, Jared Berggren was kneeling at the scorer’s table. He had not missed a shot all night, and he couldn’t get back in the game.

With 20 seconds left, Wisconsin coach Bo Ryan substituted Mike Bruesewitz for Berggren on an offense-for-defense kind of switch. Berggren stayed on one knee on the sidelines. Syracuse’s Kris Joseph then bounced a free throw long, and Taylor rebounded the ball. Ryan had one timeout in his pocket and didn’t use it. Berggren and his 5-for-5 shooting night stayed where they were.

It was unfathomable, and Ryan’s explanation for what appeared to be a classic frozen-coach moment made very little sense, even when translated from the original coachspeak, an obscure dialect with roots in both business-school jargon and Indo-European hogwash.

(No, coach, it wasn’t. You lost with your best player as a spectator.)

(Maybe nobody is. Hoorah for scrappy. Meanwhile, your team’s only other scoring option is hanging out with sportswriters.)

(Are you playing Saturday? No? It did not work out OK.)

(I don’t want to know what the bars on State Street in Madison were like at that moment. I think, perhaps, the Weather Underground might have come back.)

“There wasn’t any panic.”

(There wasn’t any second option, either. You got a hoist-it-up 28-footer and a wild heave. The only reason you’d draw a play up this way is if you ran out of chalk before the good part.)

At the end of the interview podium, Berggren himself was a picture of frustration. It had started so well. He had scored 10 points in eight minutes in the first half. But he’d picked up his second foul and sat out the last 12 minutes of the half. This is not an atypically quick trigger for college coaching, but it always seems as though a coach who pulls a star player after that player’s second foul is more concerned about what Digger Phelps might say about him on TV than about whether the move is actually a good one.

All night, when he was in the game, it was Berggren who put the crispness in Wisconsin’s clock-draining offense. At 6-foot-10, he has a remarkable ability to disappear for a second, only to pop out at exactly the right spot. Without him, the Badgers were simply slow. With him, you could see the Syracuse defense get jumpy, the players overcommitting on their defensive slides within their zone defense because they had to find where Berggren was. In those moments, you could see the talents of the two teams reach a rough kind of equilibrium on the floor.

He played most of the second half, not picking up his third foul until very late in the game. And, at the end of it, he was simply watching. A little while later, he was sitting at a podium and someone asked him what he felt like in the last few seconds, when everybody got a chance to win the game except him.

“It’s tough not to be in there at the end of the game,” he admitted. “You want to have a chance to make a play. I mean, coach made the sub and brought Mike in. Mike’s a scrappy kid. I think everyone knows that. He had a good chance to make a play defensively and then coach went to put me back in a second too late. It’s tough to see a season end from the sideline.”

There is no practice for him tomorrow. No game on Saturday. Syracuse has a game on Saturday, against Ohio State. That is what the tournament is now to Jared Berggren: someone else’s chance to win or lose it on the floor. To be on the floor, that’s all anybody wants, right?