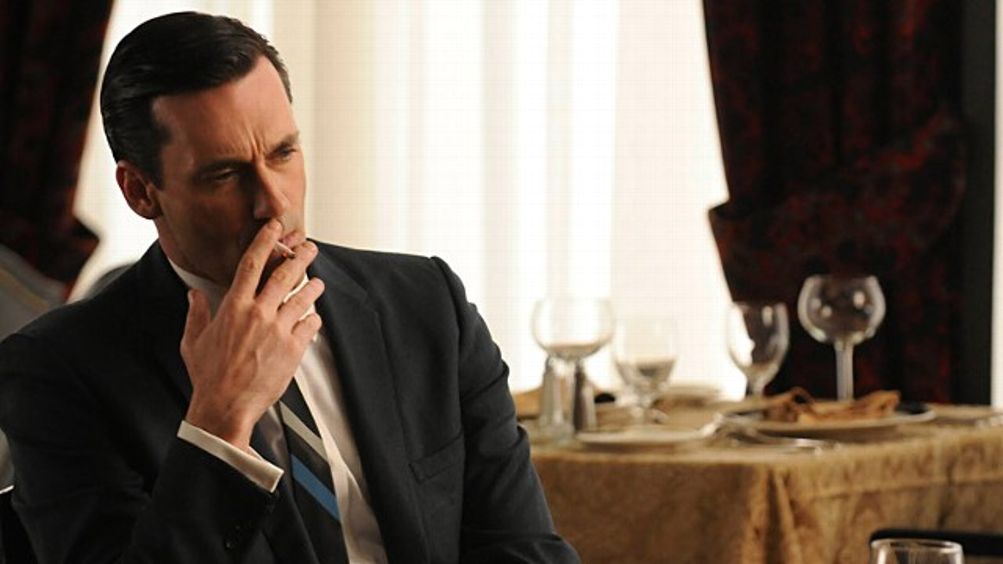 Television has certain advantages over film, but few are more meaningful than the flexibility provided by time. Because their duration is open-ended, TV shows can radically modify secondary characters to better serve whatever narrative path they decide to pursue. There’s a long tradition of this1 (especially in soap operas), and it usually involves a mild antagonist evolving into a sympathetic protagonist (Ed Helms on The Office is the easiest present-tense example). When this happens gradually, only the superviewers notice, particularly if the tweaks occur on the periphery of the story. A casual consumer might not notice at all. However, just about everyone notices when a program’s main character changes, because that’s rare.2 It transforms the show in totality. And this is why most people thinking and writing about Mad Men this morning are collectively wondering, What in the hell is going on with Don Draper?

The Draper in last night’s fifth-season premiere is not the man we are supposed to know. This man walks into work late and seems disconnected from his job. This man chases a woman home from the office when she gets unjustifiably upset about a surprise party he never wanted. He is uninterested in the life he created; the job that once defined his ethos is now an empty, unsatisfying nuisance. He seems closer to the drunken plagiarist who stole the phrase “The cure for the common breakfast” and pitched it to Life cereal, except now he’s sober. He’s only drunk on apathy.

This being the case, asking “What’s going on with Don Draper?” seems like a reasonable query. We’ve only seen one episode of the new season, so that answer is impossible to irrefutably deduce (and the writing on this show is too good to make it that easy). But what if the answer is this: What if the 40-year-old Don Draper we’re seeing now — the one we don’t fully recognize — is actually the real person he’s always been?

There are so many quality threads woven through Mad Men that it’s always possible to create your own personal meaning for what the show is “about.” It’s pretty easy to make the argument that this show is “about” the sixties, or feminism, or masculinity, or the nature of work, or the dissonance between the intellectual notion of advertising and the fabricated society that advertising generates. I suppose it’s about all of those things, to varying degrees. But I’ve always believed the true vortex of Mad Men was the process of Don Draper consciously inventing himself. It was not that he merely changed his personality — he stole an identity and constructed a life as someone who did not exist. He’s (literally) a self-made man who’s fundamentally unreal. But because of the way television works — because he was introduced as a cool, bold, brilliant machine with absolute control of his day-to-day existence — it was impossible not to infer that those qualities were the concrete composition of his actual character. This creation, it seemed, was who he was. But that cannot be. That version of Draper is the first one we see, but it’s the second iteration of reality. It’s an iteration he selected and manufactured. The qualities we associate with “Don Draper” are simply the qualities he elected to adopt and promote; they are advertisements for the unreal product of him.

Look at it like this: Think about your most successful friend. Think about how you’d describe this friend to other people, and think about the elements of their personality you’d use to define their character. What would happen if everything you know about this friend suddenly proved to be false? Assume they’ve lied to you about every single aspect of who they are, including their name and origin. Now, it’s possible you’d continue to have a relationship with this person. He or she might continue to exist as your friend, and perhaps you’d even like them more. But he or she would not be the person you thought you knew; instead, they would be someone in between the person they were born as and the person they invented. They would become a third iteration of themselves (and they wouldn’t get to control what that means or how that looks).

What if this is Don’s third iteration? The fact that he was once Dick Whitman is no longer a dangerous secret: His ex-wife knows, his new wife knows, Pete Campbell3 knows, Bert Cooper knows (I can’t remember if Roger knows, but I’m sure he wouldn’t care if he did). That first reinvention no longer matters, because there’s no longer any fear that he’ll lose everything if his past is exposed. And that was what made Don Draper unstoppable — fear. He stoically lived in wordless fear, and that made him work harder (and better) than all those around him. But that period is over. The fear is gone. The unafraid person we now see might be the human he really is: Kind of lazy, distracted by cheap desires, and unable to reconcile the existential despair of excelling at a profession that’s as unreal as the personality he occupied for most of his adult life.

It’s hard to find real-world examples of people who invented themselves as completely as Don Draper, but here’s one: Robert Van Winkle. Van Winkle was a motocross racer from Dallas who turned himself into Vanilla Ice, presenting himself as a street-smart, cop-hating rapper from Miami. Obviously, that charade collapsed. So now he’s in his third iteration — that of a failed reality star who’s a better-than-average carpenter. It’s weirder than his original version and less exciting than his second, but it feels natural. When I see Vanilla Ice hanging drywall on the DIY Network, I no longer believe I’m seeing something fake. It’s a mediated event, but not a hoax; it’s sad, but not pathetic.

I feel the same way about this third iteration of Don. It was uncomfortable to see him showing up late for work, but not unrealistic. It was strange to see him emotively controlled by Megan, but that’s probably what he unconsciously wants.4 He’s not faking it anymore, and that means he will lose. But this is the central question of personhood: Is there anything more important than being whoever you actually are?

The answer is probably. But the difference is negligible.