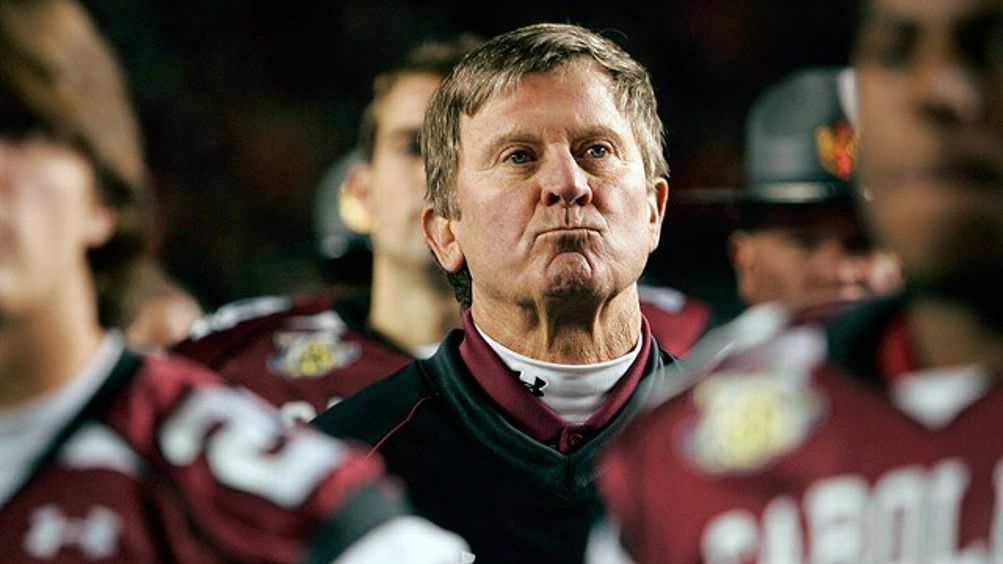 O n Monday, Steve Spurrier held his first game-week press conference of the season. He wore a scarlet golf shirt that clashed violently with the backdrop, and he opened the proceedings — as he often does — with a lengthy taffy-pull of the word Ohhhkaaaay.

“We’re doing something interesting that you guys may get a kick out of,” Spurrier said, and he unfurled that Head Ball Coach smirk: His forehead crinkled and his head crooked and his chin seized up, forming a neat round cleft in the center. By “you guys,” he meant the local media in and around Columbia, South Carolina, but he might as well have been addressing those of us who had been counting down the days until the opening of a college football season that had taken damn near forever to get here.

“Both of our punters are wearing number 13,” Spurrier said. “Have you ever heard of that, Bart? We don’t want the other team to know which one is in there.”

I do not know who Bart is,1 or why he was singled out for his punting knowledge, but according to the video, it would seem that Bart responded by raising a legitimate query about this unorthodox numerology. This gave Spurrier the opportunity to explicate. He talked about how one of his assistants had come up with the idea, and how maybe he’d make all his quarterbacks wear the same number, too. I couldn’t hear the next question, but I think someone asked how it might possibly be an advantage for Spurrier to play subterfuge with his punters, since they are both still punters.

“One kicks a little higher than the other one,” he said.

T he Ball Coach was screwing around, of course, because that’s what The Ball Coach does: He screws around. He takes pride in being the one football coach in America who doesn’t believe in exhaustive workaholism, and who plays copious amounts of golf and occasionally shows up topless at NASCAR races; he takes pride in still being perceived as the wide-open play-calling genius who won six SEC championships in 12 years at Florida, even though he’s never really found a quarterback who can keep up with his playbook (or his endless mind games) through his first seven years at South Carolina; and he takes pride in colorfully insulting reporters and opposing coaches and his own players to the point that it’s hard to figure out when he’s actually being serious.2 (Soon after his punting revelation, he confessed that the reason they would both wear number 13 is because his squad was running out of numbers, but I prefer the embellished version, don’t you?)

On Thursday night in Nashville, I watched Spurrier’s Gamecocks kick off the college football season against Vanderbilt, and it felt like a fitting way to start, because no one embodies the free-spirited joy and the nyah-nyah factionalism and the unpredictable absurdity of college football quite like the Ball Coach does. His teams at South Carolina are copiously talented and maddeningly inconsistent, and you never really know what you might get, and really, isn’t that the essence of college football? There are people who wonder why some of us prefer watching amateurs to watching professionals every fall, and the answer is simple: The answer is not Nick Saban and his hyper-obsessive perfectionism. The answer can be found in the madness of Steve Spurrier, the man of a thousand trashed headsets and just as many shattered quarterbacks’ egos. You can argue that Spurrier didn’t find success in the NFL for many reasons, but I would argue that it didn’t just have to do with his schemes, or his play-calling, or the greasy fingerprints of Dan Snyder: I would argue that Stephen Orr Spurrier, the son of an itinerant Southern preacher man, did not succeed in the NFL because he belongs in college football.

F or much of his career, Spurrier’s boyishness served as a shield; when he was hired by the USFL’s Tampa Bay Bandits at age 37, he was the youngest coach in professional football. He was the quirky former Heisman Trophy winner who called his quarterbacks “pitchers” and his receivers “catchers,” and legend has it that he all but drew up his game plan in the dirt like some kind of loose-limbed playground savant. He purposefully tried not to talk like other coaches; he refused to utter the word “great,” because other coaches overused it. He could be a pain in the ass, but he was a boy genius, and it is easy to excuse petulance in a boy genius.

Now Spurrier hobbles along the sidelines on surgically repaired knees; he is one of the oldest coaches college football has left. He has inspired a generation of imitators (see: Kiffin, Lane), and most of the rivals he pissed off during the glory years at Florida3 are long gone. He insists he has a strict policy on invective: He reserves his prime insults for the offseason, when nothing much is happening anyway, when the fans and media need a boost — this spring, he implied that Nick Saban would have to leave Alabama to be recognized as a great coach, because anybody can win at Alabama.

It is cheeky little cherry bombs like these that make Spurrier, after all these years, the most interesting football coach in America. Even if you find him distasteful, you have to admit that the sheer longevity of his self-regard is worth celebrating; now that Joe Paterno and Bobby Bowden (whose school Spurrier long ago dubbed “Free Shoes University”) are gone, he may be the closest thing we have to a living legend in the sport. “You and I both know why we do this,” he once told Tennessee women’s basketball coach Pat Summitt. “We do it so we can play games our whole lives. That way, we don’t ever have to grow up.”

Later in that same Monday press conference, someone asked Spurrier if he’d gotten his swagger back — this appeared to be the dominant narrative about him heading into the season, now that his team is ranked in the preseason top 10 and he appears to have found a quarterback, Connor Shaw, who doesn’t send him into reflexive fits of pique — and he considered the question very seriously. He said it wasn’t like that, really; he said maybe his guys just like each other a little bit more than they have in years past. He measured this affection by the fact that there had been fewer fights than in years past, and then he said he didn’t condone fighting in practice, but sometimes there’s nothing you can do about it.

I’m not sure if Spurrier realized it, but this was the kind of attempt at a broad generalization that applies only to the speaker. Most other coaches consider it a point of pride to make it through a press conference without saying anything at all, and most other coaches are just as purposefully dull at 13-0 as they are at 6-7, and most other coaches don’t “talk a little bit more freely” without either being drugged or waterboarded.

But the Ball Coach is the Ball Coach: Last month, he strutted around SEC Media Days in a garnet blazer, assuring us that long hours at the office were just as foreign to him as they’d always been. He made a joke about the ineptitude of Ole Miss, and made tragicomic allusions to the soap-opera relationship he’d had with quarterback Stephen Garcia. He also insulted the media within the first 30 seconds of his throat-clearing Ohhhkaaaay, and when someone asked him how long he might keep coaching, he replied, “My job is not that stressful.”

I cannot imagine any other coach in America who would even think this, let alone say it out loud.

I do not know how much Spurrier delegates to his assistants (a group that includes his son, Steve Jr., the co-offensive coordinator) these days, but he seemed to imply that he delegates quite a bit when it comes to things like recruiting. He still calls the plays from the sideline, and I presume this is what matters most to him, anyway, but it’s fascinating the way Spurrier has adjusted to the realities of life in the modern SEC: His team won 11 games last season and finished with the highest ranking in school history4 largely by pounding the ball on the ground and by playing defense, and if they hope to win Spurrier his first SEC title at South Carolina this season, they will most likely do it the same way.

There was a time when Spurrier might not have been able to make these concessions — when he might have insisted on pitching and catching even if his ball club wasn’t capable of either one — but maybe this is his lone concession to age, and maybe this is the one way that failure in the NFL humbled him: Maybe he no longer needs to toss the ball all over the field just to prove he is who we think he is.

Against Vanderbilt, Connor Shaw’s first pass of the game was intercepted, and I could see Spurrier’s trigger finger starting to itch from my seat half a mile north in the press box. After all these years, no one yanks quarterbacks with the aplomb of the Ball Coach, who was such a damned good quarterback that it seems he won’t be happy until he finds a way to replicate himself. But then the Gamecocks scored their first touchdown the way they’ll probably score the majority of their touchdowns this season: A linebacker intercepted a pass deep in South Carolina territory and returned it to midfield, and on the first offensive play Shaw broke loose on a read option for 20 yards, and Marcus Lattimore — who might have already won a Heisman Trophy if he hadn’t blown out his knee midway through last season — plowed 29 yards to the end zone.

It was 10-0 Gamecocks, and it looked like they might run away with it, but Spurrier’s teams did what they’ve often done in his years in Columbia: They made it interesting. Shaw bruised his shoulder, and Spurrier wound up cycling through two backup quarterbacks, neither of whom he trusted to throw the ball much. (“I’m not criticizing Dylan,” he said afterward, of backup Dylan Thompson. “I’m just saying he was struggling mightily.”)

It came down to the fourth quarter, and the Gamecocks had the ball and a 17-13 lead. They pounded the ball behind Lattimore and ran their quarterbacks out of the shotgun and picked up first downs and drained the clock, and there must have been some voice deep inside Spurrier’s head shouting and screaming and raging against this buttoned-up conservatism. The Gamecocks finished with 67 passing yards; afterward, in a spartan media room under the stands, Spurrier called it “maybe one of the worst passing attacks we’ve ever had.”

He followed up by issuing a compliment to his opponent, in the way only the Ball Coach can. “They don’t have any slow dudes like they used to at Vandy,” he said, and whether the man who uttered this meant it to be funny, I cannot say. But we all laughed.