The Last Days of Paycheck Season 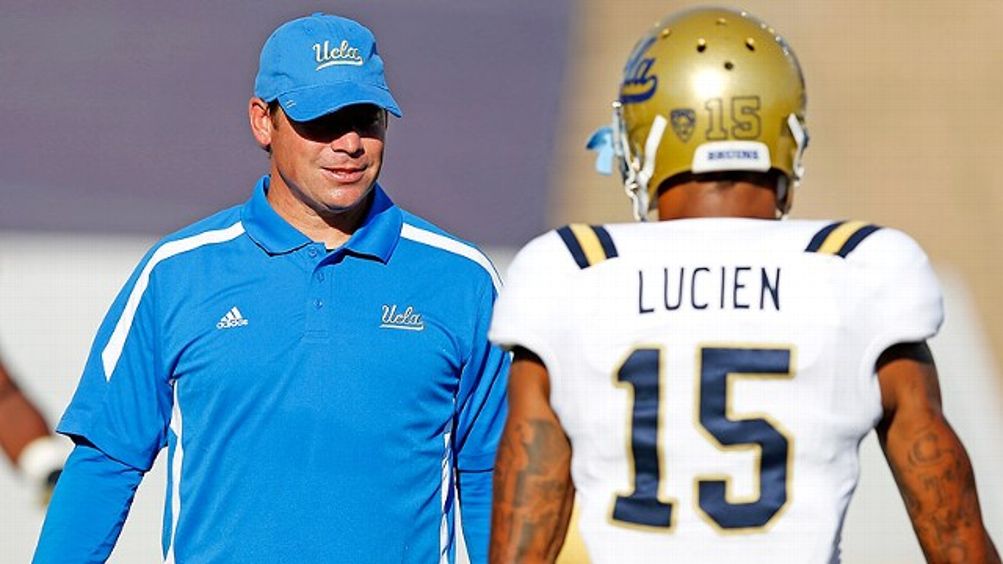 Miami at Kansas State — This one is fascinating. No program is more associated with excess, with disregard for decency, than Miami, and perhaps no coach embodies sober wholehearted work ethic more than Bill Snyder. Miami earned an invigorating road win last weekend at Boston College. They have a hell of a freshman running back in Duke Johnson (19 yards per carry on seven carries). The Hurricanes couldn’t stop the pass last week. On the other side, Collin Klein — of Hunk of the Week fame — is known for plowing through thickets of defenders, but has been working hard to develop as a passer. Saturday, that hard work needs to show up. Former Miami LB Arthur Brown, a five-star recruit from Wichita, transferred to Kansas State a couple years ago and leads the Wildcat defense. This game just has the feel of a wild one — an awesome mess.

NOTE: Miami is still waiting to hear from the NCAA, and the wait could go on awhile. The way the NCAA stalls and sighs and knits its brows and taps its ledger, you’d think they were actually going to punish someone. Likely not. Like USC and Ohio State, two other high-profile programs that were recently “punished,”1 whatever sanctions the NCAA hands down will do little more than kindle the fires of perceived injustice. In Coral Gables, these fires burn hot and they’re easy to ignite. Mostly, what NCAA trouble did for USC and Ohio State was to facilitate the exodus of coaching staffs that needed to move on anyway. The Trojans received a postseason ban that expired right when a postseason ban really would have mattered. Despite scholarship losses that are supposed to be kicking in by now, they have the no. 1 recruiting class in the nation. Things will not turn out much different for the Buckeyes. When they’re good enough to win a national championship, they’ll be allowed to.

The idea that a postseason ban would hurt recruiting is, in this day and age, quaint. The idea that top players care more about going to some bowl game than they do about playing time and getting to the NFL — that’s cute. Miami, under the cloud of NCAA sanctions,2 signed a class of 33 last year. Thirty-three guys with a couple Rivals five-stars in the mix. In the class they have for next year, they have their quarterback of the future — Kevin Olsen, out of New Jersey. When the NCAA drops its hammer, I’m expecting it to be like one of those dainty mallets a doctor uses to test reflexes. Miami will lose a few scholarships, which won’t matter that much because they signed a double-size class last year. They’ll become more selective in their recruiting, which is what you do anyway when you’ve just signed 33 players. They’ll miss out on the Meineke Queen City Belk Supersaver Hoedown for a couple years.

Georgia at Missouri — Both these teams indulged in a scrumptious profiterole last weekend and now begin to tighten their chin straps. Georgia has a dynamic, playmaking defense and QB Aaron Murray at the controls, but the Bulldog offensive line is still jelling and this game is in Columbia. As far as I can tell, there’s no reason Mizzou can’t be another squad bobbing near the surface of the SEC East soup. It’s a rugged division relative to non-SEC divisions, but there are no teams — like Alabama and LSU in the West — that cause you to stiffen and fall backward upon sight. Georgia’s defense is very good, but it’s not much different than South Carolina’s or Florida’s, or even Tennessee’s. Mizzou QB James Franklin looks dangerous and poised. After Saturday we’ll know how he’s going to fit in his new league. This will be a physicality litmus test for Gary Pinkel’s Tigers, and a test of road character for the Bulldogs.

NOTE: Georgia is officially in the SEC, but same as last year, they won’t play Alabama, LSU, or Arkansas in the regular season. This schedule may have saved Mark Richt’s job in 2011, and it should put the Bulldogs back in the Georgia Dome for another SEC championship come December.

Oklahoma State at Arizona — Watch this if you can. It’s only on the Pac-12 Network, my computer tells me. The amount of scoring could be staggering. The Cowboys tallied 84 points last weekend. Arizona, now coached by Rich Rodriguez,3 put up 624 yards of offense against Toledo.

Florida at Texas A&M — Am I afraid about my team going to Kyle Field without the benefit of the forward pass? Yes. I am. The two-quarterback thing was a disaster for Gators coach Will Muschamp last weekend, and that was at home against Bowling Green. Either guy, Jeff Driskel (Rivals no. 1 QB in the 2011 class) or Jacoby Brissett (Rivals no. 5 QB in the 2011 class), would be good enough if he got starter’s reps in practice and wasn’t made to feel that every throw was a pressure-packed audition. Driskel has been named the starter for the trip to College Station. We’ll see if he can hold on to the job.

A&M has a wet-behind-the-ears quarterback, too, redshirt freshman Johnny Manziel, and one wouldn’t expect him to fare terribly well against the Gator defense. This game will be a grinder — the perfect way to advance new head coach Kevin Sumlin’s transition to the SEC. The Case Keenum days are going to seem like another lifetime. Brent Pease, whom Florida poached from Boise State to be their offensive coordinator, will have a chance to show that he’s better than Charlie Weis — something he failed to show last weekend. Both these teams stressed toughness in the offseason, so we’ll see whose stress was better applied. The Aggies are said to have a good O-line. The Gators are said to have a good D-line. We’ll see which is so. Both teams will rely on senior running backs who have plenty of talent but have been plagued by injuries. That’s Christine Michael for A&M and Mike Gillislee for Florida.

NOTE: Kevin Sumlin already has the hang of this Big-Boy Football coaching thing. Two of his players, linebacker Steven Jenkins and safety Howard Matthews, were supposed to be suspended for the first game of the season. Whoops. That was when the first game was against Louisiana Tech. Sumlin decided the suspensions would stay with the Tech game, now rescheduled for October 13. Jenkins and Matthews will be available against Florida. You’re catching right on, coach.

First off, I love your dad. Not as much as you do, but I’m real fond of him because of those Saints teams he coached. Even as a lad, I preferred defense to offense, and I really relished those 10-9 slobber-knockers. That linebacking corps — Pat Swilling, Vaughan Johnson, Rickey Jackson, Sam Mills. My hometown team was the pre-Dungy Bucs, so the Saints, whom I chose (as children often do) for wholly non-geographic reasons, were the first NFL team with which I had any sort of satisfying relationship.

But enough about your pop, Coach. I want to adore you, too, and the way to my heart is turning UCLA into what they should be. I already sent a letter to Coach Hoke, telling him it’s imperative that he make Michigan a power again, and now it’s your turn. The Bruins have become the Virginia of the West, the team that yields the fewest results from its advantages. You’re the guy to change that. You’re the one to start convincing kids of what adults know intrinsically — that your school sits in one of the most pleasant neighborhoods in the United States and that the Rose Bowl is a gorgeous, historic stadium. You’re rested after two years in TV, and it showed in your 25-man recruiting haul last year. These players will provide the foundation of the Jim L. Mora era. You’ve also got a redshirt freshman QB, Brett Hundley, who went 21-for-28 last weekend, completing passes to nine different receivers. I know it was against Rice, but to a Florida fan who’s watched two seasons of John Brantley, the kid looked like Randall Cunningham. Bob Toledo produced two good seasons. Karl Dorrell managed one; Rick Neuheisel, none. It’s going to be different with you, Coach Mora, and the first step is this weekend against a brawny bunch of Cornhuskers. You’ve got them at your place, with those majestic ocher mountains in the background. Forget about the scoreboard. For now, just shoot for toughness. Nebraska QB Taylor Martinez, after the final whistle, needs to know he played in a damn football game. Hundley and Johnathan Franklin and the O-line need to string together first downs by force of will.

And why do I care? I’m SEC-bred, and all SEC people want out of life is for the teams that get to play in the national championship game to withstand a few trials along the way. The fairness of that relaxes us more than two fingers of Bulleit. I’m referring to USC, of course. Oregon, even. We don’t need them to withstand seven rings of hell like, say, LSU will be forced to endure,4 but we want those Trojans and Ducks to perspire a bit. We want someone to make recruiting California less of a cakewalk for Kiffin. We want USC’s road to the title game to feel a little more like The Hunger Games and a little less like showing up for a reservation at Spago.

Your school, Coach Mora, is the only one in the Pac-12 South capable of sustaining a real challenger to USC. You see what we’re going for here. We’re wanting USC to have to play more than one tough conference opponent in a season. And you’re in a position to make that happen, coach. You’re the one charged with easing the minds of the citizens of the Southeastern United States. What’s Kiffin got that you ain’t got? You achieved success in the NFL — in Atlanta, at least. Kiffin achieved a disaster. You’re from Los Angeles. Kiffin was born in Minnesota and moved to SoCal later, like Jason Priestley in 90210. Jackie Robinson was a Bruin. That’s cool. We know it’s not going to be easy, Coach Mora, but you’re the guy. We believe this.

PS: Attaboy to the vandal or vandals who defaced the USC billboard near UCLA’s campus. It’s a start.