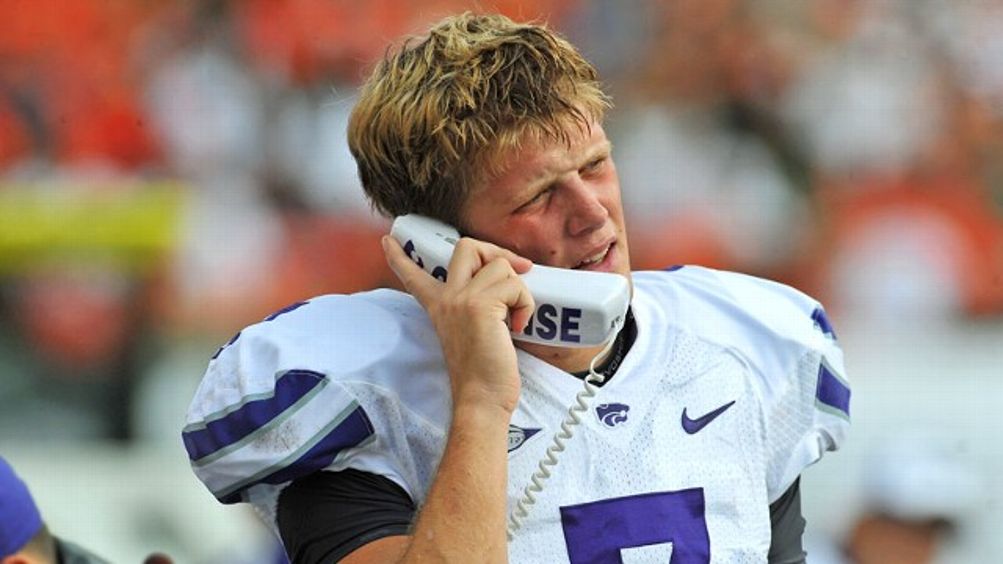 We’re kicking off this season’s “Hunk” series with our first-ever hitched hunk. At worst, ladies, he’s fodder for the fantasy mill. At best, a heck of a seduction challenge. Here he comes, work-worn but not forlorn, striding out of the cornfields (or maybe sunflower fields — sunflowers are more romantic)1 that surround the Little Apple like gently lapping waves. Mud on his cleats. Helmet in hand. What’s that hanging off his belt loop? Is it over 3,000 yards of offense and 40 touchdowns? Is it a share of the all-time Big 12 record for rushing scores at 27? It’s only a matter of time before Collin’s bride starts taking her husband for granted, but don’t expect Collin to experience feelings of entitlement regarding his starting QB role. As a freshman, he was a mere unremarkable receiver, barely a sniff of the ball, not expecting a thing, which is why he didn’t bat an eye when his coach asked him to run the ball 35 times against Texas A&M last year. Collin’s other half will get comfortable sooner or later, and that’s when you swoop in, sister, because Collin’s the type of hunk who can’t stand comfort. He moved from the fringes of scenic neo-hippie paradise to the heart of drab farm country. He’s an accounting major, for God’s sake. He’d probably sleep on a bed of nails if it were socially acceptable. Still, it’s going to take more than flashing a little big-city leg to lure this one astray. Collin’s hardnosed running inspired Bob Stoops to institute the Belldozer, and now you’re going to have to dream up something inspired to distract this less-than-wild Wildcat. You’ll have to overcome the sort of dogged dedication that resulted last season in four consecutive underdog wins. Miami, Baylor, Missouri, Texas Tech. That’s all I can do for you. I now leave the passive among you alone with your thoughts, and the aggressive alone with the tools of your trade — your Sun Coral lipstick and your Jimmy Choos and your, you know, ingenuity.

Everyone down (or over) here in non–Big Ten country is rooting for you. Hope you’re not unaware — like that singer Rodriguez who was adored in South Africa for 20 years without ever knowing it — that all us fans of no particular Midwest affiliation prefer Michigan to Ohio State. And we finally have a reason to believe equity is in the offing again for one of college football’s premier rivalries. These things are relative, but between your school and Ohio State, yours is the institution of higher learning and theirs the football factory. RichRod left a stain or two, but still you have the moral high ground — even as Urban Meyer begins bleaching away the tattoos of misconduct in Columbus.

And to a degree, it’s you personally, Coach Hoke, who’s getting us disinterested parties interested. You don’t seem like a CEO! You don’t seem canned or steamed or in any way slimy or limp. You are a CEO, because it’s required for success, but you don’t seem like one. You seem like a tough-love hombre with an indifferent haircut and a big gut who’s registered 150 tackles his senior year at Ball State, an honorable ruffian of instinctual intelligence — the type that can, on contact, make a bunch of 19-year-olds tougher. And perhaps your no-nonsense selfdom is as winning up close as from afar, because in the living rooms with the 4-stars’ families, you’re lights-out. You got this recruiting thing form-tackled, Coach. Last year, you ran neck and neck with Meyer, but ample “yeah, buts” were in place. Meyer hadn’t the benefit of a full cycle to work with. Meyer had NCAA drama dragging against him. Meyer was trying to prove to his family that he wasn’t going to be a workaholic.

Well, Coach, have you checked the services regarding your 2013 class? You haven’t? No one told you how well you’re doing? That surprises me. Well, let me be the first. You’re ahead of Urban in all of the big three. Scout even has your class número uno. Rivals ranks you no. 2 and Ohio State 10.2 “Back,” in the long term, means not playing second tuba to the Buckeyes, and you just may have the Wolverines “back.” Even the prospect of losing Denard Robinson after this season — a glum one for all non–Big Ten football fans — isn’t so unnerving when you’ve got Devin Gardner to bridge the gap between Shoelace and super-recruit Shane Morris.

We all prefer for the Big Ten to be strong, and the only sustainable and transferable Big Ten strength is the UM–Ohio State rivalry. Penn State is gone for now, but Nebraska picks up that slack. Michigan State and Wisconsin are solid, but if they’re winning the conference (as they have been), then the conference isn’t going to national championship games. Soon there will be four invitations per year, and we’ll be rooting for you to get a couple of them during your tenure, Coach Hoke.

2 = Years remaining under the current system. God knows we mallet-whomp those presidents and ADs and commissioners and bowl muckety-mucks every chance we get, and they often deserve it, but this offseason they made progress! They did something! They effected positive change! I guess it’s like Eddie Murphy says, “If you’re starving and somebody throw you a cracker.” (NSFW for language.) But this is a good cracker. This is a Ritz cracker. Whichever third-ranked teams get screwed over the next couple years, they will be the last. There will only be two more teams, maximum, to get the largest-gauge ramrod. If I’m not being eloquent it’s because I’m dumbstruck that improvement occurred.

Let’s celebrate. Bonefish! There are four sauces to choose from and the voters will have four teams to put in the Dance. We’re only one heartier nudging of the envelope away from the eight-team playoff most fans consider ideal, but I’m not even going to worry about that right now. All that matters is getting the national champion right, and this change will certainly get it righter.

I’ve never cared — and I don’t think I’m alone — that teams get passed over for the lesser BCS bowls, such as the Sugar Bowl last year selecting Michigan and Virginia Tech instead of higher-ranked Boise State. Unless you went to the passed-over school, who cares? Even if you went to that school, who cares? It’s just a bowl game. It’s just a little vacation and the start of spring practice. You get a smaller payout, but what, really, do I care about that, as a fan? I don’t. What I care about is getting the national champion right, and the tears of the fifth-ranked team aren’t as salty as the tears of the third-ranked team. If there were an eight-team playoff, the ninth-ranked team would cry, but those tears would be watery enough to make tea with. This new format should be good for teams playing the traditional Boise role: An undefeated season, if you’ve played any semblance of a non-conference schedule (which sometimes Boise hasn’t), likely gets you in. It’s also good for the AL East of college football, the SEC, which will now have a wild card when needed. Will this system take emphasis off late regular-season games or conference championship games? Not very often, I bet, and in many cases it will add national intrigue to conference championship games that are now only interesting to their regions. Last year, under the current system, the SEC title game was rendered big-picture meaningless, as all poll experts agreed that LSU could lose in the Georgia dome and still go to the BCS championship. If anything, I think the four-team playoff improves the regular season.