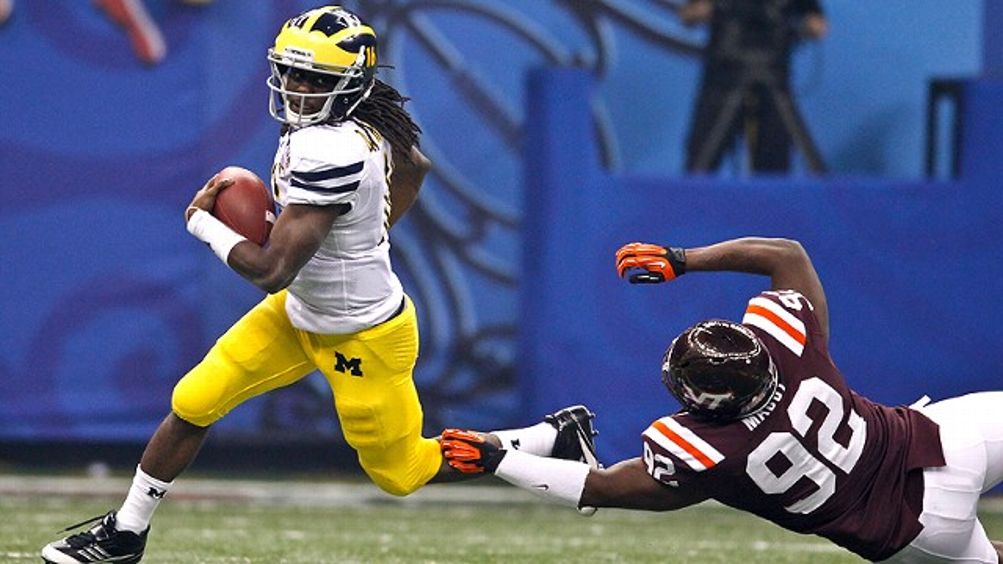 North Carolina State vs. Tennessee (in Atlanta) — Da’Rick is in Da’Doghouse.1 Well, he’s out of the doghouse and onto the roster of the Tennessee Tech Golden Eagles. Da’Rick Rogers and Justin Hunter made up the best receiver tandem in the SEC, but it takes two to tandem. With no Rogers, things will be easier for the Wolfpack secondary — a proven, veteran crew that boasts, in David Amerson, a transcendent talent. Amerson busted the ACC record last year with 13 interceptions. Say huh? Thirteen picks? Thirteen, friend. You might think Tennessee would shy away from throwing at Amerson, but Tyler Bray is an old-fashioned gunslinger suffering from Favrism of the right arm and there’s only so much his coaches can do to rein him in. Justin Hunter is a lanky guy with uncanny ball skills and good speed — think Fred Gibson, but better.

Derek Dooley, the Tennessee Head Man, sits these days in a seat of black vinyl that’s been left out in the late-August Knoxville sun. It’s quite hot. The Vols closed last season with a loss to Kentucky that prevented bowl eligibility, and recruiting hasn’t been great. On the other hand, NC State finished 2011 with a trio of wins, including a blowout against Clemson. Tom O’Brien seems to have the Wolfpack, now with a seasoned Mike Glennon at QB, headed in the right direction.

Boise State at Michigan State — This is the only tilt-worthy matchup on Boise’s schedule. That’s why I’m making sure to mention it. And — unlike most years — we probably won’t hear much about Boise after this game. Cinderella’s going to turn in way early with a Brian Austin Green movie and some mint chocolate chip ice cream. You know, sick as it is, I might miss the nagging yet empty threat of the Broncos making the championship game. If they can make a struggle of it in East Lansing, it will be an amazing feat. Boise State’s personnel losses from last year include starting quarterback, tailback, tight end, the entire offensive line, and about nine starters on defense. Michigan State also has a young QB trying to fill cavernous cleats — strong-armed Andrew Maxwell replacing Kirk Cousins. You don’t just replace Cousins or Kellen Moore, because what those guys did went way beyond arm talent.

Michigan State’s front seven should carry the day in this one. And remember the Tennessee receiving corps that recently shrank? The Vols would’ve been more ready to handle the loss of Da’Rick Rogers had DeAnthony Arnett not transferred to Michigan State. He’s immediately eligible and immediately talented. The Spartans can use him. Tennessee could’ve, too.

Navy vs. Notre Dame (in Dublin, Ireland) — This starts, what, eight or nine in the morning Boston time? The question is whether the Irish faithful will be up early or still up from last night.

Auburn vs. Clemson (in Atlanta, Assistant Coach Edition) — Auburn has an electric runner in Onterio McCalebb, a top-flight tight end in Philip Lutzenkirchen, and a dependable receiver in Emory Blake. The question is whether Kiehl Frazier will be able to thrive in an offense that doesn’t care to utilize his feet.2 We’ll find out the answer right away, because if Clemson’s offense is as good as it should be, Auburn won’t have the luxury of nursing Frazier along. New Auburn defensive coordinator Brian VanGorder, of Georgia Bulldog and Atlanta Falcon fame, will have his hands full with Clemson QB Tajh Boyd, RB Andre Ellington (seems like he’s been there forever), DeAndre Hopkins, and Charone Peake. (Lucky for Auburn, the amazing Sammy Watkins show has been suspended for two games.) Forget embarrassment, it’s a humiliation of offensive riches for Clemson. Chad Morris is living right. He’s the highest-paid assistant coach in the country at $1.3 million per, and he’s got class-A toys to roll out.

On the defensive side, Clemson snagged longtime Sooner Brent Venables. Venables got a raise by defecting to Clemson. Apparently head coach Dabo Swinney redirected 300 grand of his earnings toward hiring and retaining assistants. The bugaboo for Clemson has been losing games they ought to win, and if that continues to happen in 2012, Swinney will be about out of tricks. If the soft losses are eliminated, then Clemson’s new problem will be paying Swinney.

These are two of the least predictable teams in the country, so chances are this game will be engaging.

Alabama vs. Michigan (in Arlington, Texas) — Our effusive thanks go to the athletic departments of these schools. Neither team needs this game, and in fact the playing of it is imprudent for both. It’s a windfall for fans, though. Michigan’s defensive line is questionable, and the ‘Bama power running game is nothing short of an Inquisition. Nick Saban wants to keep Denard Robinson idling on the sideline, and he’ll try to use Eddie Lacy, the next in the lineage of stud Tuscaloosa ballcarriers, to actualize this desire. Alternatively, there’s never a good time to play the Tide, but Michigan is at least catching them with some new faces on defense — sure, faces that will likely appear in an NFL game program one day — but new nonetheless. The hope for ‘Bama’s opponents is that, at least for the first few weeks, this defense won’t be the soul-killing shutdown crew from last year. Alabama people, recuse yourselves from the following query: Have you, gentle reader, heard of Ed Stinson, of Adrian Hubbard, of Trey DePriest or Xzavier Dickson? Well, those guys may be starting in Alabama’s front seven. I’m attempting to drum up hope that the Michigan offense, a squad with playmakers at quarterback (Denard, duh) and possibly, if coach Brady Hoke allows him to play after a suspension for drunk driving, running back (Fitzgerald Toussaint), can possess the ball and hit a few chunk plays against the Tide. If this game is close — meaning if the Wolverines can stand up to the demoralizing ‘Bama run — the difference could prove to be underachieving Roy Roundtree,3 undersize speedster Jeremy Gallon, and unproven prototype Jerald Robinson. Saban will dedicate his forces to containing the run. That much we know. What we don’t know is whether Denard Robinson can hook up with his wideouts downfield.

Wisconsin — Well, the schedule is always a good place to start. A single tough road game at Nebraska, then late-season tests from Michigan State and Ohio State at home. On paper, only those three games will make Badgers fans nervous. What’s going to work against the Badgers is they probably have to go undefeated. There will likely be one-loss or undefeated champs from the SEC, Big 12, Pac-12. If Wisconsin walks out of Lincoln with a victory, the Madison faithful will begin to dream. Bret Bielema again got a gifted, experienced QB — this time it’s Danny O’Brien from Maryland — to transfer in for a title run. Now that’s recruiting! How many teams haul in top recruiting classes only to find half of those recruits on different teams three years down the road? Florida is my team, so let’s look at them. In 2010 they boasted the no. 1 recruiting class, according to Scout. Here are some guys who ain’t on the team anymore:

Scout rated Wisconsin’s class from this past year at 36, but it doesn’t reflect signing an upperclassman signal-caller who will start from day one. A guy like that is worth, oh, 16 or 17 stars.

Oregon — Now this is a schedule! No kicking things off with a kamikaze mission against LSU, like last year. Arkansas State, Fresno State, Tennessee Tech. Those games will be useful in getting new QB Marcus Mariota ready for, well, Arizona. And, um, Washington State. The Ducks don’t run into anything that looks like the varsity until Washington on October 6. The Huskies have a heck of a QB in Keith Price. That’s a home game for Oregon. They may need star safety John Boyett to make a play or two in that one. The tough pill to swallow is going to L.A. to play USC. It’s doubtful Oregon can stop Matt Barkley in the Coliseum. The good news is that if they lose, they can get another shot at the Trojans in the Pac-12 championship game. The bad news is that the Pac-12 still seems not to have caught on to the simplest guideline for holding a conference title game: The game ought to be held at a neutral site. Am I reading this wrong? Do I frequent out-of-date websites? Again, the Pac-12 Big Game will be held at the home stadium of the team with the best record? I thought that was temporary for last year until they got their shit together.4 That’s rough for Oregon. A one-loss season in which you’ve avenged the one loss and most of your wins have come by 40 points — that sounds pretty good. Running deliriously roughshod over 11 Davids and getting beat twice by Goliath on his home turf — that sounds pretty dispiriting.

Virginia Tech — They have a quarterback and a defense. If they’re good enough to stay on this list, we’ll see them take an unblemished record to Clemson on October 20.

West Virginia — The Big 12 is a league in which you outscore people, and they’ve got to like their chances of doing that. The marriage of the Mountaineers and their new conference is made in heaven — for fans, at least. Four delicious apricot tarts to begin the season, and then hold on to your couch cushion — a test of mental grit at Texas, a test of physical toughness when K-State and then TCU come to town, then the Cowboys at Stillwater and the Sooners at home. If breathtaking QB Geno Smith stays healthy, they should come out of this OK. The November 17 home game against Oklahoma may be one of the games of the season.

Anyway. Nobody believes the Hogs have any chance of reaching the SEC championship game,5 but if they’re going to, this might have to be the year. The Tide have a young defense, at least parts of it, at least for now, and Arkansas plays them early in the season, in Fayetteville. Then, wow, there’s at Texas A&M, at Auburn, at South Carolina, and at Miss St. The Razorbacks’ schedule ends with LSU. Good Lord. Tyler Wilson is the best QB in the West and Knile Davis is back. They lost three big-time receivers in Jarius Wright, Joe Adams, and Greg Childs.

South Carolina — Addition by subtraction: Stephen Garcia was a great distraction and Alshon Jeffery, last season, seemed greatly distracted. Addition by re-addition: Before his injury, Marcus Lattimore was one of the best running backs in the country. He’s back. The Gamecocks lost defensive guru Ellis Johnson, but they’re always loaded with talent on that side of the ball. Like, weirdly. They’ve got a hellish five-game stretch starting October 6 with Georgia and followed by games at LSU, at Florida, and then Tennessee and Arkansas at home. They get a week off with Wofford, then finish at Clemson. Last year they lost two games. Hard to see them doing much better than that with this schedule, but it’s possible. Lattimore and Connor Shaw must stay healthy all season.

Clemson — Same old. The talent is there. Looking at their schedule is pointless because they lose to teams they should beat. Offense should be stunning. The last time we saw the defense they were giving up 70 points. Even against West Virginia, it’s hard to give up 70 points. I’d be interested to know if Dabo Swinney buried that tape deep under Howard’s Rock, never to be spoken of, or if that awful performance was used as motivation for the defense during offseason workouts.