The Reducer: Week 12, The Bridge Is Over 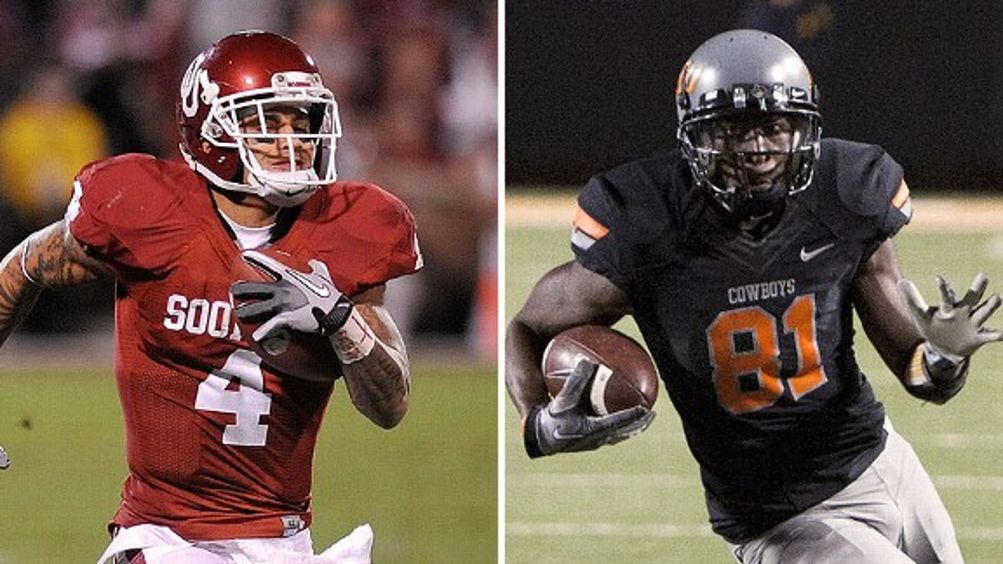 Editor’s note: For a few of college football’s biggest rivalries, we invited the sports editors of several college newspapers to compete in a friendly write-off. To vote on who won, visit our Facebook page. To read the first four parts of the series, click here and here, here and here.

While I’m waiting for Berry Tramel to arrive at O’Connell’s Irish Pub in Norman, Okla., I’m staring at “OU” and “OSU” on either side of my reporter’s notepad. I’m trying to discern which team will win Bedlam this season. I list pros and cons for each team, and find the differences between them are so infinitesimal that nitpicking their so-called weaknesses begins to feel like profound insight.

Both teams can be annoyingly erratic, and both are capable of summoning the kind of magic you’d swear could be performed only at The Mirage. No one knows this better than Berry.

Berry — as Oklahoma’s most widely read columnist asks me to call him — has covered sports in Oklahoma for more than 30 years. My own thoughts on the subject mean little in comparison to those of the career newspaperman. And they mean even less than those of the two members of OU royalty (read: Heisman winners) I asked earlier this year.

When I asked 2003 Heisman winner Jason White at one of his autograph signings who he thought would win what could amount to an epic game in Stillwater, he gave me the company line: “I think OU’s gonna win Bedlam.” Heisman winner Billy Sims was more verbose when I spoke to him at Barry Switzer’s statue unveiling about the Sooners’ chances in Bedlam. “It’s always tough,” he says. “Even last year, it was tough. It’s going to be real tough to go to Stillwater this year and get a victory. They’re pretty good. OSU’s got good players. I like what coach [Mike] Gundy’s doing.”

Berry shows up as the minute hand on my wristwatch hits 1 p.m. He’s (ridiculously) punctual. I don’t wait long to start firing questions, and soon, Berry’s explaining how Jap Haskell, George Lynn Cross, Lloyd Noble, and Bud Wilkinson rebuilt OU into a football juggernaut upon Bennie Owen’s foundation. He eventually moves on to OU’s chances to out-rodeo the Cowboys in Boone Pickens’ corral.

The server makes her way to our table. Berry stops midsentence. She places a menu in front of him, and he peers at it over his glasses.

She politely asks me if I’m ready to order. I shake my head no. I can’t eat. I’m working this crimson-and-orange equation out. My head hurts from all the questions. Among them: How good is this Pokes team?

“This is the best team in OSU history,” Berry says. “There isn’t any doubt about that.”

The Pokes’ only loss was an excusable one — to Iowa State on what was one of the darkest days in OSU history. Still, a loss — even in double overtime at Jack Trice Stadium — is a loss, and it’s a blemish that can’t be covered up in the scrutinizing glare of AP and coaches poll voters. OU, on the other hand, lost focus not once, but twice.

Oklahoma suffered its first home loss in six years when it fell to Texas Tech. The stench of that clumsy defeat still wafts through the Norman air. The Sooners haven’t looked the part of a national championship team this season, and they sealed their fate as a costar in the BCS big picture with a loss to Baylor. They’ve had sloppy wins against Missouri and Kansas, and flirted with losing to Kansas State in Manhattan. On the other hand, the Cowboys have been shooting down teams quicker than Bat Masterson.

“They’ve got a quarterback who can sling it, receivers who can catch it, and they’ve always had good running backs,” Berry says. “I would tend to favor OSU right now.”

I nod in agreement. Brandon Weeden and Justin Blackmon are telekinetic on a football field. I’ve seen the Ginger Gunslinger throw footballs that Blackmon pulled down by sheer will, strength of hand(s), and black-and-orange magic. The Cowboys’ defensive backs aren’t slouches either: Brodrick Brown, Justin Gilbert, and Markelle Martin will play on Sundays, and they’ve managed to stay healthy.

OU lost the nation’s all-time FBS leader in receptions after he cut the wrong way and hit the ground clutching his knee. Ryan Broyles’ grimace and tears after the play illustrated what we all knew. That came just one week after Dom Whaley, the feel-good story of the season, injured an ankle.

The Sooners are winning the lopsided series 82-16-7, and they’ve walked away with the “W” in their past eight contests with the Pokes, including the past four trips to Stillwater. Landry Jones is a Heisman-caliber quarterback, and the OU receiving corps is far from pedestrian. They’re ballplayers with plenty of athleticism and a thirst for success. They know you can’t expect to play football in Norman and sully OU’s good name. The Sooners’ front-seven is lined with future NFL draft prospects and college football award winners. That they call themselves “sharks” only serves to reinforce their mystique on the field. OU hustles. OU has heart.

Berry and I finish talking, shake hands, and say good-bye. (He won’t let me pick up the check.) I sit staring at my notepad and think about what I’ve heard from Berry and what I’ve seen from Oklahoma’s two largest football programs this season. I throw my tape recorder in my bag, and just before I leave O’Connells, I circle “OU” on my notepad and scribble “Hustle and heart wins out” at its bottom.

Oklahoma: Where hustle and heart will always win out.

I could rattle off stats and overanalyze every key matchup. I could break down all the BCS formulas and delve into the intricacies of the prolific Oklahoma State offense. For effect, I could even throw out some superlatives about “the biggest sporting event in state history.”

I could explain why Brandon Weeden’s rocket arm and Justin Blackmon’s superhuman ability spell trouble for the Sooner secondary. At the end, I could tell you why two weeks of preparation, combined with a raucous Stillwater crowd, will lead OSU to a most-important Bedlam win. Heck, I could even throw in a score prediction (Cowboys 45-35).

But it would all seem a little artificial — an in-depth breakdown from a 21-year-old college kid who didn’t play a snap of high school football (the same dude who picked OSU to stomp Iowa State by four touchdowns in the last game).

So I’ll spare you the gimmicky rundown. Don’t worry, with the importance of this game in a football-crazed state, you will get plenty of them — all predictions that will become meaningless as soon as the ball is kicked off.

1. The Program Needs It for Validation

Boone Pickens’ money led to the facilities. The facilities led to better recruits. The better recruits led to more wins. It’s more complex than that, and other factors are involved, but those are the basics for the rise of Oklahoma State football.

For the past few years, it has been building. Nine-win seasons in 2008 and 2009 were followed by a program-record 11 wins last season. Returning from that historic team was a core of talented young players to go along with the nation’s best pass-catch combo — star power with the nucleus to back it up.

Following the path that Oregon paved, OSU viewed 2011 as the next step, a chance to jump from recognizable to feared, from perennially ranked to perennially elite. And even after their stumble in Ames, the Cowboys can still make that climb. Their first BCS bowl, first Big 12 title, and an outside shot at the national championship are still squarely in their sights. The only thing standing in the way is Bedlam.

2. The Rivalry Needs It for Competition

It used to be that Oklahoma fans viewed Bedlam as an easy win, just another chance to flex their gridiron muscle and establish dominance over the state. It didn’t matter that OSU might have better academics, and it didn’t matter that in all sports combined the Cowboys have 50 national championships to the Sooners’ 26. In this part of the country, football rules everything. Here, the only numbers that matters are 82-16, as in OU’s all-time record in Bedlam, and 7 to 0, as in the number of national football championship trophies in Norman and Stillwater, respectively.

But now, as the talent disparity is closing, the worry level in Norman is rising. The areas that were once an OU landslide — money, facilities, players, and expectations — have become comparable in every aspect. The only thing missing for the Cowboys is a signature Bedlam win. It’s a weight Mike Gundy (0-6 career against OU) carries around, and a fact all Cowboys fans deal with daily on the Internet message boards.

A win this year would change things. It would send the Cowboys to heights they have yet to reach while exiling a once-promising Sooners season (no. 1 in the preseason) to San Antonio and the Alamo Bowl. An OSU win in Stillwater is the reinvigoration that this rivalry needs.

3. The Community Needs It for Healing

It’s a long and desolate trip up I-35 — 45 minutes north from Oklahoma City, the closest major city, to the Stillwater exit. You see the sign and think you’ve made it. Hardly. Off that turn is a narrow stretch of unknown highway that lasts 18 miles but feels like 118.

Stillwater is isolated, and the residents seem to like it that way. The reclusiveness creates a certain bond and sense of family among the more than 45,000 who live there. Each person is strung together by the school and unified by the successes and failures of its athletic department.

It’s why 60,000 alumni and current students get together every Saturday in the fall. It’s why they root for a team made up of mostly Texans just because they don the orange and black. And it’s also why they were so crushed two weeks ago, when a plane crash took the lives of four of their own. It was the second such tragedy in 10 years, as a plane crash in 2001 took the lives of 10 people affiliated with the OSU basketball team.

A win on December 3 doesn’t bring those people back or heal those wounds, but it’s an important step in the grieving process. It’s a way for a down-on-its-luck program to stick it to Squinky, as one Grantland writer eloquently put it. And, who knows, it may be a chance to play for Oklahoma State’s first national title in football.

So I’m still not going to tell you which team is going to win Saturday night, but I feel comfortable telling you to which team a win would mean more. And that’s Oklahoma State.