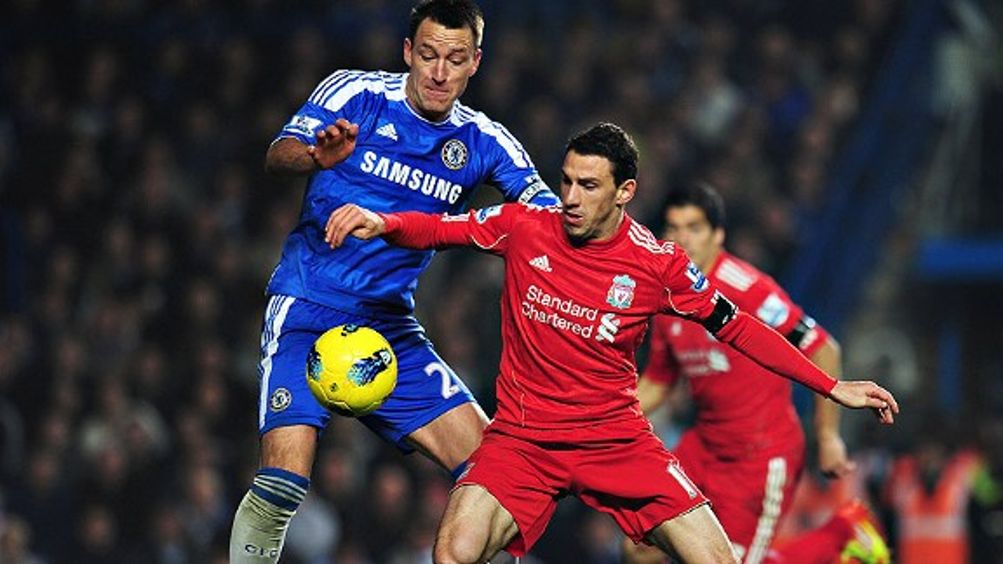 Game of the Week: Liverpool 2, Chelsea 1

The Reducer figures there’s never really a right time to get your lunch money snatched by a 60-year-old Glaswegian, but that being said, Andre Villas-Boas really picked the wrong Sunday to run into Kenny Dalglish.

Leading up to the Stamford Bridge clash between Liverpool and Chelsea over the weekend, Villas-Boas, while still cutting as suave a figure as ever, was losing some of his cool. The Blues, in order, lost to QPR in a match in which their delightful captain John Terry (allegedly) racially abused Anton Ferdinand, just squeaked by Everton in a Carling Cup match, got tonked by Arsenal, drew with Genk (Genk!), and barely beat Blackburn. On top of the losing, drawing, and racially abusing, Villas-Boas was looking over his Savile Row-tailored shoulder at the looming figure of former Chelsea boss and recently departed Turkish national team manager Guus Hiddink, who was making noises about wanting to return to the club.

Chelsea needed a win on Sunday to keep pace with the two Manchester teams (and Newcastle!) at the top of the table and create some separation from what is shaping up to be a rest-of-the-season dogfight between Arsenal, Spurs, and Liverpool for the fourth Champions League spot. Instead, after losing 2-1 to Liverpool in a highly entertaining if not particularly well-played match, the Blues find themselves right in the middle of it.

So how did this happen?

This one was decided on a wager. Villas-Boas bet on the action taking place in the center of the park, starting Ramires, John Obi Mikel, and Frank Lampard in midfield. Dalglish gambled on taking the game to Chelsea, leaving Lucas and Charlie Adam to do battle on their own, two-on-three in the midfield, and sending out his “not fucking around” crew (if I may borrow from Jon Hamm’s unintentionally funny monologue from The Town) of Luis Suarez (himself no stranger to allegations of racial abuse, though somewhat mitigated by the language barrier between him and his supposed victim Patrice Evra), Craig Bellamy, Maxi Rodriguez, and Dirk Kuyt.

This front four harried, hassled, and harangued Chelsea’s back line and, with some help from Adam, jumped Mikel in his own half in the 33rd minute, pinballing the ball around until Maxi slotted it in past Petr Cech. The goal came off a Chelsea mistake, but Liverpool deserved its reward.

There was another gamble in Dalglish’s team selection. By picking Bellamy and Maxi, two crafty, creative veterans, instead of Jordan Henderson and Stewart Downing (two of Liverpool’s highly scrutinized young British signings this summer), Dalglish was counting on jumping on Chelsea early, as he wouldn’t likely get a full game at full speed from his veterans. Unsurprisingly, Liverpool looked a little gassed in the second half. And when substitute Daniel Sturridge scored in the 55th minute, the Reds looked like they were rocking a bit.

The rest of the second half saw chance after Chelsea chance either just missing or parried away from Pepe Reina. Such was the Spanish keeper’s performance that Terry was inspired to pat him on the back after he slapped away a David Luiz header.

The match seemed headed for a draw, and were it the Chelsea of Terry and Ricardo Carvalho and Michael Essien following the Mourinho doctrine of stuffing trophy cases full of hardware, aesthetics be damned, then that’s exactly what we would have gotten. But Andre Villas-Boas is trying to build a Barcelona on Fulham Road, and apparently that means his defenders need to look like Sideshow Bob and go Beckenbauer-ing into the opposing team’s half.

Watching Henderson roast Ashley Cole and Terry down the right flank late in the second half, I was surprised about how unsurprised I was. There’s a thin line between a high line and suicidal defending, and Chelsea has been walking it all season. And in the 87th minute, following Henderson’s lead, Glen Johnson knocked Chelsea off that line.

Adam hit Johnson with a cross-field diagonal (exactly the kind of pass Liverpool has been missing since Xabi Alonso’s exit). Johnson blew right by Cole and knocked a shot right past Cech, giving Liverpool the three points. It was a shambolic end to what had been a night of comically bad defending from Chelsea. And while neither goal was the fault of David Luiz, he was held up after the match as the symbol for Chelsea’s defensive decay and current malaise.

Villas-Boas was defiant in his postgame comments. When told that pundit (and ex-United defender) Gary Neville said Luiz played like he was being “controlled by a 10-year-old in the crowd on a PlayStation,” the Chelsea boss said, “Gary Neville was a fantastic defender, but it is a stupid approach to an opinion. If that’s the way he wants to take the game, that is ridiculous.”

Liverpool and Chelsea are both attempting to rebuild while remaining competitive. Both clubs have spent a lot of money to buy young, get faster, and play more attractive football while still trying to appease some of their veterans and fan bases. The match Sunday was not a referendum on the progress of Chelsea’s and Liverpool’s rebuilding, but it certainly didn’t bode well for Villas-Boas’ short-term future or Chelsea’s long-term success.

The Chelsea team that lost was made up of names from the past: Drogba, Malouda, Lampard, Terry, Cole. If Villas-Boas is going to remake Chelsea, he needs to not only change the style of play, but also the names he selects for the side. Play Romeu. Play McEachran. Play Meireles. And for the love of god, just play Torres. Too many managers before him have failed to get old Chelsea to play a new way. It’s time for a new Chelsea.

Here’s an abbreviated minute-by-minute account for anyone who found something more inspired to do with their lives on Saturday than watch the 19th team, Blackburn, play the 20th, Wigan. The match was played in Wigan, in front of about 84 people, 52 of which were Blackburn fans who made the short journey to scream at the top of their lungs about how their manager should be fired. Ahem:

Blackburn’s Yakubu chips past keeper Ali Al-Habsi and two defenders imitating Keystone Kops (1-0, Blackburn), Wigan’s Victor Moses gets clipped in the box, but there’s no call, and Latics boss Roberto Martinez starts a match-long Malcolm Tucker imitation. Wigan’s Jordi Gomez hits a wonder strike past Paul Robinson made a smidge less wonderful because Robinson looked like he was on horse tranquilizers (1-1). Gary Caldwell puts Wigan up with a header — I think Robinson moved that time (2-1, Wigan). Blackburn’s David Dunn gets sent off for his second yellow, and I try to think of a “Dunn Language” joke for the six to 10 people in the world who know who David Dunn and Mobb Deep are. I settle for this:

Blackburn equalizes courtesy of some really galling and obvious cheating by supervillain Mort Gamst Pedersen. Wigan goes ahead with a classic big-man-knocks-it-down-for-the-wee-man goal. Then Blackburn snatches a point with a dying-moments penalty from Yakubu, though the Rovers should really get two points since the penno was given due to their keeper, Paul Robinson, leaving an empty net, coming all the way upfield, and GETTING KICKED IN THE FACE.

After this game I looked like Benjamin Button on the day of his birth. It was perversely entertaining, like a football version of It’s Always Sunny in Philadelphia, but I say this with all sincerity: Relegate them both.

• Speaking of relegation … Stoke is gonna want to watch itself. The Potters are 19th in the Form Table, losers of five of their past six. The Reducer fully grasps that late-week Europa League road trips to Turkey and Ukraine can wear a team down, but Tony Pulis is going to want to take a break from punching holes in drywall and think about his club’s Premier League survival. It lost to QPR at home in its onetime fortress, the Britannia Stadium, torn to shreds by off-the-scrap-heap names like Luke Young and Heidar Helguson. Stoke spent big on Wilson Palacios and Peter Crouch in an effort to make a run in the Europa League and solidify its top-half-of-the-table status. The way things are going, it will find itself fighting for Premier League survival if it isn’t careful.

• Shout-out to Swansea and Norwich. Both teams lost with dignity this weekend to a cagey Man U and high-flying Arsenal, respectively. These newly promoted sides have been acquitting themselves incredibly well; they’re wonderfully supported and play entertaining football. So, basically, they’re the opposite of Blackburn and Wigan. Swansea, led by its midfield wizard, Leon Britton, bravely attacked United throughout the second half to the delight of its home fans, while Norwich’s center forward had Arsenal defender Per Mertesacker cowering like Bronson Pinchot during the elevator scene in True Romance.

OK. It wasn’t that bad. But Norwich might have gotten a point (or more) had they not run into the unstoppable force that is Robin van Persie (more on him later).

• Manchester City posted record losses of £194.9 million. Sheikh Mansour has basically been doing the Aaron Hernandez touchdown dance since his arrival several years ago. But after watching all the talent on display, on the bench, and in exile against Newcastle this weekend, The Reducer asks: Is Micah Richards the best pound-for-pound player on City?

• Speaking briefly of Newcastle, The Reducer’s estimation of this side only grew in its 3-1 loss to City. Two of those goals came off penalties, and Hatem Ben Arfa, Sammy Ameobi, and Demba Ba looked like a sparkling attacking trident. Credit also to manager Alan Pardew, who was pragmatic and cocky at the same time when talking about the possibility of some of his better players being sold in the near future: “I think any of our players that get linked to other clubs, those clubs are going to need to know they’ll need to pay a shedload of money to get anyone out of this football club.” Yeah, so get your shed, Roman.

Goal of the Week: Mario Balotelli

(Go to :49 in the video.) The Reducer wouldn’t ordinarily put a penno in Goal of the Week, but that celebration is really some serious keeper trolling. Nice Darth Vader impression, Mario.

Quote of the Week: Arsene Wenger

“He makes the right decision in fractions.”

The Arsenal boss channels a bit of Dennis Hopper (“You can’t travel in space, you can’t go out into space, you know, without, like, you know, uh, with fractions, OK?”) when talking about his flammable striker, Robin van Persie.