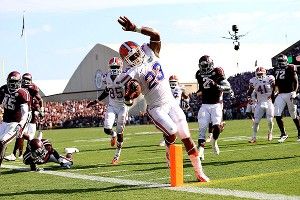 If you’ve had enough friendship and are ready for the benefits, this one goes out to you — those who’ve dropped a million hints and are still standing on the sidelines of love. Your measurables are nothing to sneeze at. Your dedication is beyond reproach. But here you are, in the same spot Mike Gillislee had been the past three seasons, helmet on your hip, leaning against the water cooler. Normally I advise boldness in all matters of romance or sport, but this once let’s allow quiet steadfastness to rule the day. Let’s employ some emotional endurance, girls. Just like you’ve had to watch a parade of bimbos in microskirts file in and out of your beloved’s life, Gilly’s had to watch all his carries go to a pair of skinny speedsters (Chris Rainey and Jeff Demps) who dazzled two different coaching staffs with little more than their 40-yard dash times. And remember that one girl, Marisa or whatever her name was — she wasn’t even pretty!

Gilly knows how it feels to be insulted. At one point he stood by, champing at the bit, while his coaches called designed runs for John Brantley, a dude who, in a 100-yard dash with a bunch of winded linemen, would’ve finished in the middle of the pack. Gilly endured his slights, and guess what? Now he’s got his hot little hands all over that pigskin. He’s got nothing but carries. They won’t let him take a break. Hang in there, my diligent darlings. At some point those six-inch-heeled tarts will all totter away and the light bulb will turn on in your guy’s head and you’ll be getting your 34 totes against a top-five team. Your guy’s friends all know you’re the best girl for him, just like the Florida fans have been screaming for Gilly all these years. Gilly has a little more speed and a little more pop and a little more shake than his coaches knew, and when the time comes, my persistent pretties, you’ll get to show just how hot you are too. It’s not easy, I know. All these garbage-time carries: picking up his dog from the vet, helping him pick out a gift for his sister’s birthday, explaining his phone to him. But a wise man once said, “Woman take it slow, it’ll work itself out fine.”

Kansas State at West Virginia — This is a three-hour open-book test. The Wildcats know exactly what the Mountaineers can and can’t do (can sling the ball dizzyingly all over the field and make your secondary look silly; can’t stop a runny nose on defense) and have a cheat sheet on how to frustrate the Mountaineer offense courtesy of old Tommy Tuberville and Texas Tech.1 Bill Snyder and Collin Klein have been clear about their course objectives since day one: They will stare you down with fundamentals and toughness until you blink. This is a gut-check for the Mountaineer defense. Nothing can save them now except finding reserves of intestinal fortitude they didn’t know they had. A loss wouldn’t necessarily put West Virginia out of conference championship contention, but it’ll make it unlikely. The skies will be gloomy in Morgantown indeed if the faithful have to face the fact that Dana Holgorsen’s offense has been studied and analyzed and the defenses have caught up.

It will be interesting to see what role home field plays for West Virginia. No matter how well Snyder and Klein know the material, it’s difficult to take the test in the cafeteria in the middle of a food fight, with the fire alarms going off and the teachers making out with each other and the class clown mooning you and the stoners blowing pot smoke in your direction. And the couches on fire.

Alabama at Tennessee — This is a self-graded quiz. Alabama, through no fault of their own, has yet to play a good team. Arkansas was reeling when they played the Tide, and Razorbacks QB Tyler Wilson was out. Missouri looked a lot better in past seasons, running seven-on-seven drills, than they do in the SEC, and their quarterback was also hurt when the Tide rolled into town. Michigan isn’t as good as we’d hoped. Like I say, not Alabama’s fault.

This weekend they play a starting quarterback, NFL caliber no less, and the best pair of receivers in the conference. Tennessee has shown they don’t have the depth/conditioning to win a fourth-quarter game, so upset alert is not necessary, but at least Alabama can test the limits of its defense. They’ll get to see how their corners hold up against a toothed aerial attack. Alabama QB AJ McCarron may get his heart rate up a little against a thin but talented Volunteer defense. You know, push the treadmill up to 4.5 or so, instead of, like in Columbia last weekend, watching his Junior Seau–size running back beat the other team’s back four in a 73-yard dash on the second play from scrimmage.

The Tennessee brain trust is in the process of deciding when to fire Derek Dooley and begin re-rebuilding. It would take a miracle to save his job at this point. Winning this game would qualify.

Virginia Tech at Clemson — One of these teams can go with all their friends to the regular class in the main building. The other gets shipped out to the trailer, the remedial section.

South Carolina at Florida — This is a final exam. If the Gamecocks lose in Gainesville, they’re buried in the losers bracket. If Florida loses, they’re left hoping that either Tennessee or Arkansas can go into Columbia and beat South Carolina. Tennessee certainly cannot go into Columbia and win. Arkansas probably cannot. For Florida, the final exam includes two parts, one on the main campus against the Ball Coach, one at the satellite campus in Jacksonville, against Georgia. Make sense? If not, discuss it in lab with the TA.

The givens: Both quarterbacks, South Carolina’s Connor Shaw and Florida’s Jeff Driskel, will immeasurably annoy the other team’s fan base by running for first downs. Gamecocks running back Marcus Lattimore will do his share of winding and surging and dragging. The Gators will play better in the second half than in the first. The “x” factor (other than turnovers, which are always the biggest “x” factor): throwing the ball downfield. Against these defenses, the old adage is right — when you throw, four things can happen and three of them are bad. But somebody is going to try it, and what happens when they do may decide the game. Sack-fumble or 65-yard touchdown strike? Spurrier wants to throw the ball, we know, but he has learned to think better of it since Lattimore came to town. Muschamp does not wish to throw the ball — ever, though especially against a defensive end like Jadeveon Clowney — but he may be forced into it. Don’t look for Florida to push this issue. If South Carolina wants to go into halftime up 6-3, Florida will happily allow it.

Oregon at Arizona State — In the time it takes to fill a blue book, the Ducks can score 100 points, so Arizona State will skip the essay test and take their chances with multiple choice. Who is that running with the ball? (A) Marcus Mariota — QB, fast, (B) Kenjon Barner — RB, real fast, (C) De’Anthony Thomas — weapon, a different element, or (D) None of the above, they’re throwing. As for Oregon, their semester is back-loaded, so ASU will have to do for now. They have a defense, everyone keeps telling us, and the Sun Devils will help them figure out how true that is. Arizona State is said to be experimenting with discipline for the first time in recent memory, and it’s working. Coach Todd Graham has brought respectability and character to the desert suburbs. They lost to Missouri, which isn’t great. They beat a Colorado team that, if we were in England, would’ve been relegated by now. They beat the Berkeley Bears. Well, those were the prep courses, Sparky. Here comes the SAT.

LSU at Texas A&M — Every high school has a pecking order. A&M is the cool new kid. They have an awesome house (Kyle Field), boyish impetuosity (freshman quarterback Johnny Manziel), and a propensity to live on the edge (beating Louisiana Tech by a whisker last weekend). LSU will meet them at high noon (EDT) out by the bike racks, hoping to show them a thing or two about the SEC West. Or A&M goes apeshit on the Tigers, like Ralphie did to that bully in A Christmas Story.

The Book: Ninety-two in the Shade
The Author: Thomas McGuane
The Sport: Fishing
The Dope: Maybe a couple dozen times in my career as a reader I’ve encountered something kinetic enough and virtuosic enough to be in the top class of Originals. If this sort of talk frightens you, unashamedly take your attention elsewhere. There’s nothing wrong with knowing what kind of reader you are. I could’ve used this same opening for other McGuane books — the one that comes to mind is Panama, which seems of a piece with Ninety-two in the Shade. Both books are set in Key West and both have a bracing blend of high debauchery and unlikely moral compass. I chose Ninety-two because of its emphasis on fishing, but don’t expect a fishing book like Hemingway might write. You will get detailed, possibly even instructive descriptions of skiff-fishing strategies. You will also get gorgeous details of the shallows surrounding the Keys. You’ll get love interest. You’ll get a professional rivalry. You’ll even get a main character who lives in an old airplane fuselage. You’ll get a retired Army sergeant who drills an empty lot full of drunks every morning at dawn. You’ll get all that and a bunch more, but just as consequentially, you’ll get a special brand of line-to-line wizardry. The language is off-kilter, always in a productive way. When it’s not off-kilter, it’s a clear-eyed refreshment. It’s an invigorating feeling, as a reader, to feel that you’re missing something you usually depend on, and are instead getting something you can barely handle. If you’re not up for it, no worries. I’ll be back in a couple weeks with something that walks the straight avenues, rather than strutting the alleys with a switchblade.