Winter Is Coming to Philly 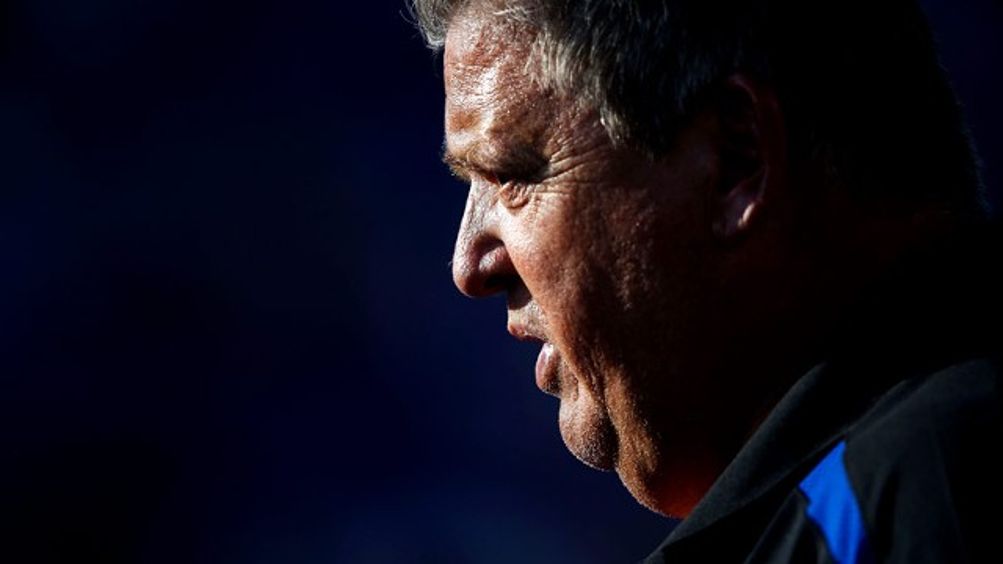 Letter to a Coach (Intervention Edition)

Thanks for coming, Coach Weis.

I want to start off by saying that everyone in this room cares about you deeply. No, don’t head for the door. Don’t run away. This is a safe place. There you go. Right there on that Naugahyde lounge chair. Settle in. I think, way deep down, you know this is overdue. We’ve kept quiet as long as we could, but we’d be doing you a disservice if we passively stood by any longer. Where are you? Where are you, Coach? It’s not a trick question. That’s right, you’re in Lawrence, Kansas. You’re the head coach of the University of Kansas football team. Are you ready to get honest? Are you ready to get real? Good, then I’m just going to ask you — what’s the plan? Have you asked yourself that? What are you after with all this? Is it your ultimate goal, after the eventual retirement of Kansas State coach Bill Snyder, to have the best amateur football team in the state of Kansas? Is that the end game? Is that the treasure you seek?

Your cockiness is one of the things we adore about you, but you’ve bitten off more than even you can chew. Hey, there’s that smile. I’m glad to see you still have your sense of humor, but this is no laughing matter. If not for South Dakota State, Coach, you’d be winless this season. Kansas State just drubbed you. Oklahoma State is on the way. The Sooners and Longhorns and Bears, oh my. You see the light at the end of the tunnel? Neither do we, Coach. I know, it’s OK. Let it out. You’ve been working so hard, barely sleeping. Look, Coach, we have to be frank or this process is meaningless. Here’s the truth: Even if you did have a “decided schematic advantage” over anyone, you would need more talent than the Kansas football program is going to attract. This is a dead end.

Sometimes you can’t tell how far off track your life is until you wake up one morning in a college town with a black eye where old Bill Snyder knocked you out cold. You used to win Super Bowls, man. You’re not leaving this room, Coach Weis, until you look us in the eyes and say the following: I am an NFL offensive coordinator. Look up. Don’t mumble. Say: I belong in the AFC. Doesn’t that feel good? Sure it does. Now hand over the play sheet. Go ahead, hand it over. No, nobody’s mad at you. The Chiefs? That was ages ago. Florida? They’re probably a little confused still, but they’ve moved on. Moved on with who? Oh, what does it matter? Some guy from Idaho or something. That’s all in the past. What are they ranked? Who knows? Who keeps up? What’s Notre Dame ranked? I really couldn’t tell you. Look, this is about you, not anyone else. Let’s focus on you, and the fact that you’ve got to want to change for this to work. No one can do it for you. Now, I’m going to leave this computer and this Rolodex. You look and you find out which pro offenses are struggling, and make a few calls. Will you do that? Good. We’re going to leave you alone now. Lunch? Sure, whatever you want. You just stay here and get the phone lines open. Mussels Josephine and Sir Will’s Fish & Chips? OK, if that’s what you want.

Stanford at Notre Dame — I’ve alluded now and then to a confusing development regarding my feelings toward Fighting Irish football. Am I the only one? Is there a support group? I was always comfortable with the tried-and-true policy of rooting against them, of cheering their misfortunes, and now, well, I need some fresh air or something. Is it that they’ve been average for so, so long? It’s like if Darth Vader had been stripped of all his power and banished to Branson, Missouri, where he had to work at a mini-golf complex. At first it would be hilarious, but after a while I would miss the old villain.

Is that it? That I want to see the Irish at their strongest so I can justifiably dislike them again? Is it that they’ve gotten enough distance from impossible-to-like Charlie Weis? Is it that they finally have a defense, and in my Southern heart I just can’t respect a team without one? Is it that douchey Jimmy Clausen and airheaded Brady Quinn, both of whom you kind of wanted to see blindsided, have moved on? Is it that Manti Te’o seems to be the ideal collegiate athlete? Is it that last season The Newsroom aired an episode thematically based on Rudy? Is it that Notre Dame faces USC every year, and USC has become, during the period Notre Dame has been becoming boring to despise, a complete joy to despise? Is it that I now have a close friend who went to Notre Dame, and this personal contact with the Other has softened my prejudices? You feel what you feel, and I just don’t feel dislike for South Bend any longer. Do they get lots of undue attention, even though they’d go — at best — 5-3 against a random slate of eight SEC teams? Sure. But who cares? Everybody gets a lot of attention now. Every team has a host of websites dedicated to it, and every team seems to be constantly on TV.

So when Notre Dame faces Stanford, its stiffest test to date, I won’t root against them. Stanford, though I’m sure they don’t care about Pac-12 pride, are playing for it. The win against USC was huge for David Shaw as he tries to keep the Cardinal clinging to a certain echelon, and losing to Notre Dame would deny them access to the gated community of college football power. Losing to Notre Dame would put Stanford firmly where we expect to find them — runners-up, also-rans — the kind of team that can surprise a big boy, but then loses to Washington and two weeks later loses to Notre Dame. I’ll be rooting for the Notre Dame front seven, and for moody young quarterback Everett Golson. This is all pretty disorienting.

Oklahoma vs. Texas (Neutral Site, Dallas) — It doesn’t matter that both teams have a home loss. If both teams were winless, it wouldn’t matter. This game will always have that feel. On the level at which these two programs are expected to operate, the season is effectively over for the loser. Landry Jones is an old pro in the Sooners’ attack, but the big story for Oklahoma has been how difficult replacing Ryan Broyles and DeMarco Murray has been. They have talented receivers, but something has been missing in the passing game (like barrages of touchdowns) since they lost wide receiver Broyles last November. The passing game worked up a nice sweat against a surprisingly tough Texas Tech defense, and the Sooner faithful are hoping Jones is on the same page with his committee of wideouts. Running back Murray, playing for the Dallas Cowboys for the past two seasons, left a lingering shadow in Norman, too, one that junior Damien Williams hopes to dissolve with his versatility and burst. Oklahoma is hard to figure out sometimes, but they’ll show up for this game. Last year they blasted the Longhorns 55-17.

For Texas, in my view, things are dire. It’s blasphemy, I know, and a breach of University of Texas policy, but if I’m a Texas fan I’m starting to get antsy with coach Mack Brown. Texas has been an average team the past two seasons and we all know their talent is not average. Talk about struggling to replace people. Colt McCoy ain’t walking through that door. Texas believes they have their man in quarterback David Ash. They have a bunch of good running backs. What about defense, though? I know Oklahoma State and West Virginia possess good offenses, but so does Oklahoma. And Baylor. And Kansas State. Does the Texas defense struggle through the season and then cite the quality of the opposing offenses as an excuse? Or does the Texas defense grit its teeth and play up to its collective talent? There’s not a three-star in the bunch, and three of Texas’s front seven — DE Alex Okafor, DE Jackson Jeffcoat, and LB Jordan Hicks — were rated no. 1 at their positions coming out of high school. This isn’t a defense that should be trying to put its fingers in dams. This is a defense that should be dominating games. A victory on Saturday would catapult Texas into the discussion for big things, particularly because, after Baylor next weekend, they play three straight winnable games. A loss Saturday means nothing has changed in Austin — a third straight average year.

South Carolina at LSU — Oddly, since this is college football, and the SEC, no less, this game is not a must-win for South Carolina. Their remaining Eastern Division games may turn out to be must-wins, but this one isn’t. A one-loss SEC champion gets to the same place as an undefeated SEC champion: Miami and the National Championship Game. For LSU, this is a must-win. It’ll be fascinating to see how they respond after getting out-bullied by Florida. It’s difficult to locate an offense in a week, but that’s what Les Miles must do. South Carolina’s defense will be no more forgiving than Florida’s was, and Gamecocks coach Steve Spurrier, unlike Florida’s Will Muschamp, employs the forward pass from time to time.1

It’ll be fascinating to see what Miles does if the Gamecocks get a lead. His often-successful game plan is to do nothing on offense but pound, then wait for his defense to make big plays, which they usually do. And if that doesn’t work, well, he depends on his unequalled luck. That’s the game plan he’ll start with, but if South Carolina gets up a touchdown, that might go out the window and LSU might need to attempt to score on offense. Apparently, they hate doing that. Perhaps Tigers QB Zach Mettenberger will find a semblance of moxie in front of the home crowd that he couldn’t find in Gainesville or Auburn. Perhaps we’ll see a couple of those LSU special teams surprises. No one in Baton Rouge feels great about the Alabama game right now, but the last thing they want is for the Alabama game to be rendered moot because LSU has already lost twice.