And Then There Were 16: The Bar Brawl to Face Kentucky 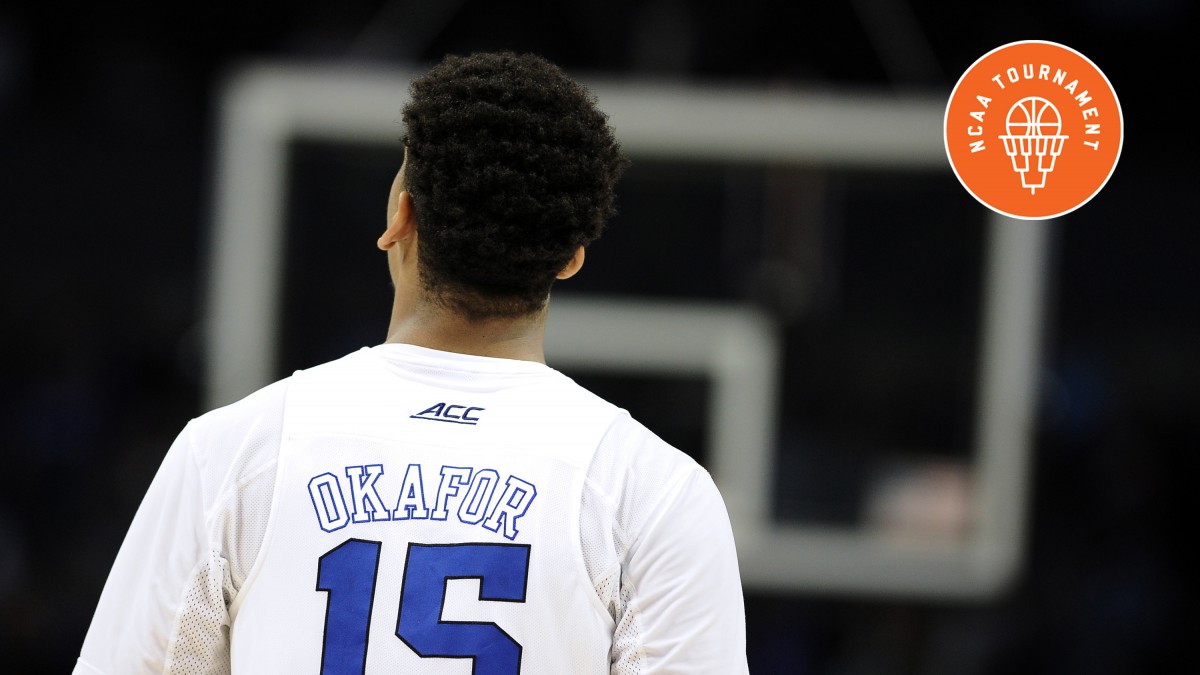 “Jackie Brown at twenty-six, with no expression on his face, said that he could get some guns.”

That is the greatest opening sentence in American literature not written by anyone named Melville. And it is the opening sentence of the greatest novel ever written about Boston, which is The Friends of Eddie Coyle, by the late George V. Higgins. Unlike the fake Boston underworlds of Martin Scorsese’s The Departed or Ben Affleck’s The Town, Higgins had it right — the circular, baroque conversational style; the answering-questions-with-questions so characteristic of the Irish on both sides of the pond; and the lantern-jawed, cold-eyed cynicism endemic to the crooks and to the cops and to the lawyers, the latter of which Higgins was one himself. Everybody talked the same language, allusive and elusive all at the same time. His books, like life, never came to simple, untangled conclusions. There always was a sense of complexity and complicated sin going on after the final page.

All the Grantland coverage of the 2015 NCAA tournament, right here.
If George V. Higgins had written himself a basketball novel, its hero would be Pat Connaughton of Notre Dame and Arlington in Massachusetts. He has the determined slant to his jaw and the questing look about him of one of Higgins’s Boston G-men, or an incorruptible prosecutor who speaks the language of low-rent criminals in order to bring them down. And on Saturday, with the game tied and time running down in regulation against Butler, a deadly shooter named Kellen Dunham was lining up a 3-pointer in the right corner that would have put Dunham in the tournament highlight reel all the way to the one shining moment in Indianapolis. Connaughton took off toward Dunham. He was planning on doing more than bothering him. Fouling didn’t even enter his mind. Connaughton spiked the shot into the second row.

“I was making sure that shot didn’t get off,” Connaughton said. “That kid, Dunham, is a fabulous shooter. One of the best in the country. The job that Steve [Vasturia] did on him all night, I wasn’t going to let that go to waste.”

Connaughton had an interesting, if off, night. He did not shoot well, but the one 3-pointer he did hit put Notre Dame in the lead for good, 62-59, in overtime. In fact, Connaughton merely put up a quadruple-single: seven points, nine rebounds, one assist, and a startling five blocks. However, even with Jerian Grant running the offense at the point, Connaughton clearly was his team’s driving wheel. Near the end of regulation, when young forward Zach Auguste — yet another player from the Commonwealth (God save it!) — was whistled for a potentially catastrophic double dribble with two seconds left, it was Connaughton who came over to him and kept Auguste’s head up.

“I made sure I got Zach,” Connaughton said. “There were guys in the huddle in the timeout who were frustrated. They were frustrated with the mistakes that were happening. I made sure I pulled everyone together and I said, ‘What’s happened is over. There’s nothing I can do about it to bring that back. The great thing about it is that mistake still gives us a chance to create our own destiny. We still have the ability to win this on the defensive end.’ I pulled him aside afterward and I told him, ‘No matter what happens, I’m going to have the confidence that you’re going to come back and do something great that’s important to this team.’

“Don’t dwell on something. That’s something me and him have talked about. I used to dwell on games when I played badly in previous years. This is just a quicker version of that. If you look at it, he had [two] massive rebounds in overtime that helped seal the deal.”

The games in Pittsburgh did not produce a national championship team. They likely didn’t even produce a Final Four team, because Notre Dame moves on to Cleveland, where Kentucky is looming on the other side of the regional. But the games were very representative of the odd dual-layer nature of the 2015 tournament. Notre Dame emerged after two close games against Northeastern and Butler. NC State beat LSU and top-seeded Villanova by a total of four points. If there really is Kentucky and Everybody Else, then Everybody Else has an obligation to carry the tournament. In Pittsburgh, Everybody Else was people like Pat Connaughton, and Pat Connaughton, at age 22 with no expression on his face, said that he could make some plays. And did. 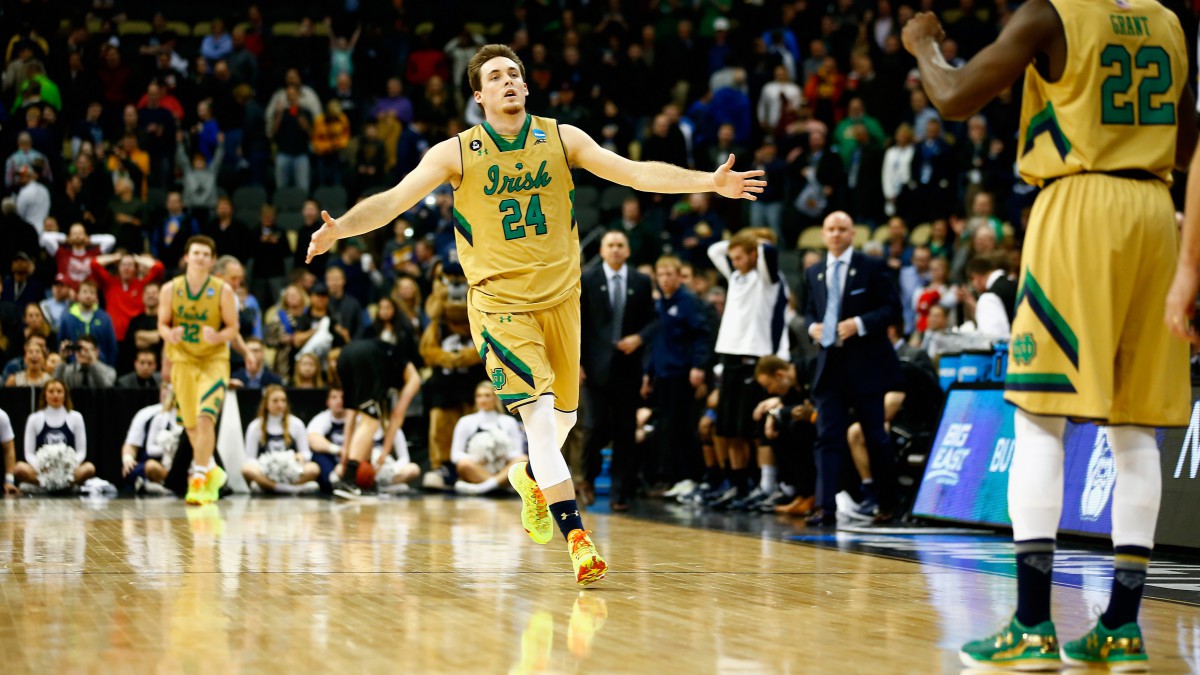 Now that the herd’s been culled to 16, it’s hard to say one way or the other whether the chalk has held in this year’s tournament. Certainly, that’s the case with Kentucky, which, despite some lackadaisical shooting against Cincinnati, has performed exactly the way people expected it to perform. The same can be said for Duke, which has Jahlil Okafor in the middle of one of the great salary drives of our time. (Even Mike Krzyzewski, Leader Of Men, conceded before the season that Okafor’s a rental who’s out of there when the tournament ends.) There is no question that the team having the most fun is Wisconsin, which had to work hard to get by Oregon. The Badgers players have become famous for their interest in the stenographer who’s working their regional. In pursuit of this peculiar enthusiasm, Wisconsin’s Nigel Hayes managed to get both “cattywampus” and “onomatopoeia” into the off-day interview transcripts. (I think Hayes’s next experiment in this regard should be on the general theme of Towns In Wisconsin. He should begin with Oconomowoc and go from there.) That’s why I think the Badgers are the best shot in the field against Kentucky. This is a team that does not crack. It took two serious haymakers from Michigan State in the Big Ten championship game and came back strongly to win. Now we know that they are not intimidated by thesauruses, either.

The rest of the field is an entertaining stew. UCLA has moved to the second weekend of a tournament to which it should not have been invited at all. West Virginia is intriguing, and, as is always the case, Michigan State is an absolute pain to play in the final days of March. Watching the Spartans methodically dismantle crumbling Virginia on Sunday was to see a team suddenly discovering that it has a legitimately powerful offense to go with its customary hammer-and-tongs defense. But after Duke and (maybe) Wisconsin, there really isn’t much daylight between any of the other 13 non-Kentucky teams still alive in the field. It is a group of squads that defies conventional bookmaking, which is the only thing keeping this year’s tournament from becoming a coronation march. Everyone’s a favorite. Everyone’s an underdog. If you stipulate Kentucky, the other three spots in the Final Four are completely up for grabs. It’s like watching the old heavyweight division when Ali, Frazier, and Foreman were mixing it up with contenders like Ron Lyle, Ken Norton, and Earnie “The Acorn” Shavers. If you want your chance at the crown, you’re going to have to go through a couple of real brawls to get there. 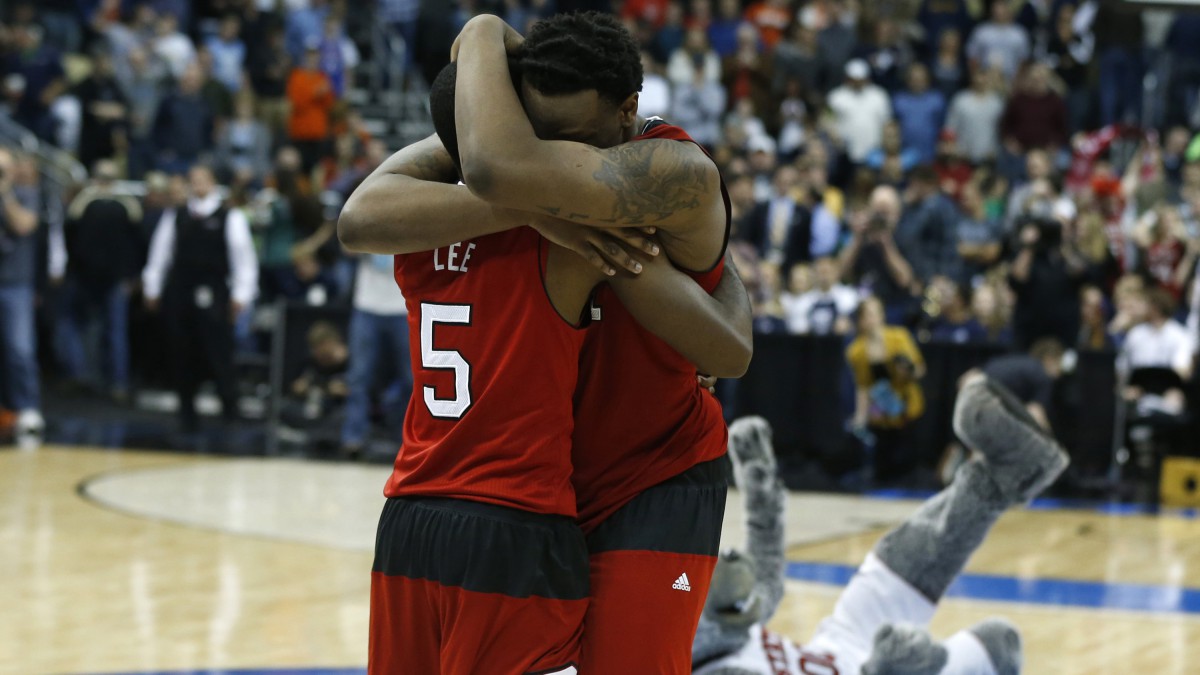 And then there was Villanova, now existing only in the past tense, the first top-seeded team to depart the brackets, which came out in a deadly combination of flat and nervous against NC State. In many ways, Villanova was the anti-Kentucky, a blended family with no real stars but with small guys who could shoot and big guys who could chase and everyone solidly on the same page. However, against the Wolfpack, the shots weren’t falling — 9-for-28 from behind the arc — and the Villanova big men were next to useless, and they didn’t have to reach very hard to touch it. They got beat to every loose ball, every ricochet of a rebound, and they seemed helpless against the drives of NC State guard Anthony Barber. In addition, the Wolfpack’s forwards commanded the baseline through the whole game.

“You have to give NC State credit,” Villanova coach Jay Wright said. “They came hard at the rim and we couldn’t. We couldn’t get a lineup on the floor that could control the glass, and our guards were getting beat by their guards.”

There was nothing illegitimate about Villanova’s seeding. It was 32-2 before the tournament in what is still considered a very good conference, although NC State coach Mark Gottfried was correct after the game in saying not only that the ACC his team had to bludgeon its way through was a tougher push, but also that his team, as erratic as it has been — and it takes a rare kind of inconsistency to beat Duke by 12 and lose to Boston College by 16 — was not going to back down from any opponent, including the top-seeded one in its bracket.

“We respect Villanova,” Gottfried said. “But we’ve seen good teams. We’ve seen a lot of them in our conference. You see them about every night. So a league like that prepares you for games like tonight.”

As the field narrows, its two levels will become more and more clearly defined. There is a great brawl brewing over who will be the last team with a chance to beat Kentucky, because the assumption is bone-deep in most observers that Kentucky will be there at the end. Everyone is equal on that level. Pat Connaughton of Notre Dame is equal to Anthony Barber of NC State, who is equal to Frank Kaminsky of Wisconsin and Jahlil Okafor of Duke. They’re all scrambling for one chance at the big payoff. There’s an underworld to the 2015 NCAA tournament. George V. Higgins would approve.