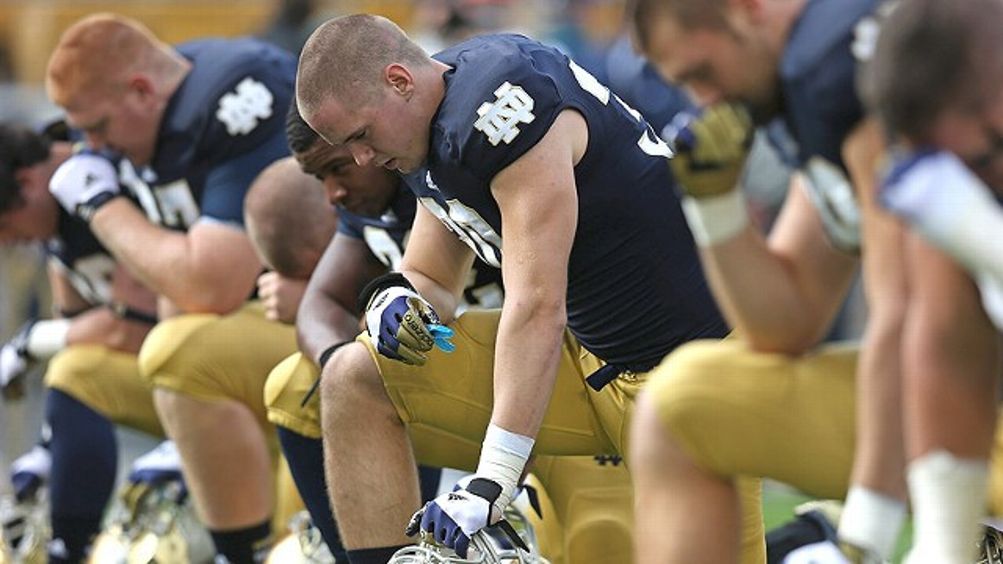 Notre Dame at Oklahoma — To the degree that anything in college football can be shocking, I’ll be shocked if the Irish pull this off. In South Bend, I’d give them every shot, but in Norman? Notre Dame has a defense, but Oklahoma has a defense and an offense. There’s more upside to this game for Notre Dame, so we must all thank the Sooner athletic director for agreeing to it. A win will give Oklahoma some sort of boost with the BCS computers, but it won’t help them win the Big 12, which may have already slipped away. Also, oddly, a convincing win for Oklahoma would be less convincing than a close win. If the Sooners beat Notre Dame by three touchdowns, everyone will think the Irish weren’t that good to begin with. For Notre Dame, on the other hand, this is a great opportunity. No one doubts the validity of beating the Sooners at Gaylord. A win could jump the Irish over the Ducks. Maybe Florida loses to Georgia. All of a sudden Notre Dame could be in the top three.

Mississippi State at Alabama — I won’t say much about this. Just that it’s Alabama’s toughest test so far. Maybe they’ll be looking ahead to LSU, but mostly what the Bayou Bengals want is for Mississippi State to soften up the Tide, to play them for four quarters, or at least three, as the Tigers rest on their off week.

Oregon State at Washington — The Beavers have the best turnover margin in the Pac-12. That’s what I read. They’re supposed to get starting quarterback Sean Mannion back for this game, which would be a boost, but his backup Cody Vaz has performed admirably all the same. All non-Pac-12-affiliated fans are now pulling for the Beavers. (If you’re not, what’s wrong with you?) We’re hoping they can escape the fate that Stanford ran up against in Seattle. Washington signal-caller Keith Price has been having problems of late, and he’ll need to get himself together if the Huskies are to have a shot. Every game Oregon State wins makes Oregon Duck fans happy, because the Ducks will get a strength-of-schedule boost by beating the Beavers at the end of the season. Every game Oregon State wins makes Duck fans nervous, too, because they have to go play the Beavers at Reser, where strange things happen.

Florida vs. Georgia (at neutral site Jacksonville) — I don’t think anyone outside or inside the Bulldog locker room knows what to expect from this talent-laden Georgia squad. It wouldn’t be surprising if the defense finally jelled and Aaron Murray went off and the game was a blowout in their favor. It also wouldn’t shock anyone if the Georgia players all got down on their backs and started making imaginary snow angels on the field. This team is unpredictable. They don’t seem good enough to win the SEC East, but if they beat Florida they likely get the trip to Atlanta. They won the scheduling jackpot again, playing Ole Miss and Auburn out of the West. By comparison, UF played LSU and Texas A&M. One side has to lose, and that will be bitter. One side has to win, and after the celebration is over, the winners will grow grave in their private moments as they begin to contemplate the rising Tide.

Michigan at Nebraska — Nebraska seems to be hanging on for dear life to something greater than a shot at the Big 10 crown. As time passes — meaning, as the world gets worse — it seems less and less likely that great talent, or enough of it, can be recruited to Lincoln, Nebraska. What Bill Callahan did to the Huskers, which was to raze to the ground an identity that had taken many decades to build, was ugly. Nebraska, by hiring Bo Pelini, gave itself a reprieve. The offense he runs is a system they’re capable of running well, and his intensity seemed to give the whole program a boost. But still, the recruiting. In 2011, Nebraska hauled in the no. 15 recruiting class; in 2012, the no. 25-rated class. As of now, they’re expecting the no. 33 class for next season. The Huskers have already lost handily to the strongest program in the Big 10, Ohio State, and now they play the second-strongest program. The one thing the Huskers haven’t done this season is lose at home. That’s why this game is huge for them. Sure, they need it for the Big 10 standings, but more important, they need to defend their home field. The thing they have that can’t be taken away is Husker Nation, and they’ll need to show that whatever challenges they face in recruiting, they’re not the kind of team that loses at home in a showdown game against a flawed team like Michigan. This is an echelon game. Denard Robinson, of course, can be electric, but whatever pride the Blackshirts have must come to the fore this Saturday, because the last time these teams tangled, Michigan put up 45 points.

Texas Tech at Kansas State — Last year, Kansas State was considered a great story, but not a title threat. Now they’re a title threat and they’re hosting a team that’s expected to be proven a good story and nothing more. Another stud quarterback in Lubbock. Maybe it wasn’t Mike Leach. Maybe it’s the water.

And Despair Fell Upon the Assembly (Realignment Edition)

Mountaineer Field was a valley of sorrow this past Saturday, when the West Virginia defense answered accusations that they were soft by removing all doubt about it. They’re soft as … you know, something real soft. Kansas State’s Collin Klein went 19-for-21 passing for 323 yards. I think that’s about exactly as well as most offenses would do against air. If you went out against no defense and ran 21 15-yard routes, the ball would hit the ground maybe twice. West Virginia head coach Dana Holgorsen and his staff proved unable to make adjustments. Again. Collin Klein proved unflappable. Again.

The Mountaineer offense has a bunch of dynamic weapons and a quarterback who could knock a honeydew off your head from 45 yards away, and their offense looked like a … well, you know, it didn’t look too good. I thought this was going to be like Rocky IV, where the Russians start cheering for Stallone. I thought the Mountaineer faithful weren’t going to be able to resist Klein. He’s not quick. He’s not huge. He’s neither smooth nor shifty. His throwing motion is stiff. His haircut is no good. He looks like he ought to be in black-and-white. Yet he makes whatever yards are needed, running or passing. He’s excruciatingly patient. What he’s doing isn’t magic, but it doesn’t adhere to normal physical laws either. There’s something clatteringly amazing about the guy.

Ah, college football. You can go from thinking national championship to thinking let’s rebuild this whole thing in the space of a fortnight. Kansas State, you’re in the thick of the title hunt. West Virginia, start courting Rex Ryan for your next defensive coordinator. Or Buddy Ryan. Just get a Ryan.

Two roads have diverged in the shadowed SEC wood. Missouri has proven unworthy, while Texas A&M has shown it belongs. And how. Nonetheless, the Aggies’ Kyle Field was put through its second unhappy initiation Saturday. There’s plenty to be happy about in College Station. You’ve got a real-deal superstar quarterback and you’ll have him for a couple more years. You’ve got a top-10 recruiting class arriving next year, 28 strong. Texas is down. Ryan Swope and Damontre Moore. Plenty to smile about. But then there’s this other matter: There are three teams in the SEC — A&M has already faced two and will play the last of them, Alabama, on November 10 — who do not care whether their quarterback or their home crowd has a nickname, who do not care about statistics, who do not care about orchestrating a balanced offense or if TV analysts feel confident in their passing attacks, who do not care if they get called for three or four personal fouls a game, who do not care if their cheerleaders are pretty or what their BCS rank is, who do not care about anything except strapping themselves into a steel chair and strapping the opponent into an identical chair opposite them and exchanging head-slaps until one party passes out. LSU and Florida were good enough to allow A&M the first half-dozen swings, and then coaches Miles and Muschamp looked up, blood trickling down their chins, maniacal grins spreading across their faces, and slowly lifted their pimp hands. Alabama is not known to show such courtesy. They’re known to strike you in the temple immediately, so you’ll give in right away.

All this is to say that the final step of assimilation for coach Kevin Sumlin and Texas A&M will be gaining that depth, conditioning, mind-set, and ability to adjust at halftime, all of which allows a team to want four quarters. It reminds a team that the first half can be loads of fun, but the second half determines the winner.