Novak Djokovic: The Shot and The Confrontation 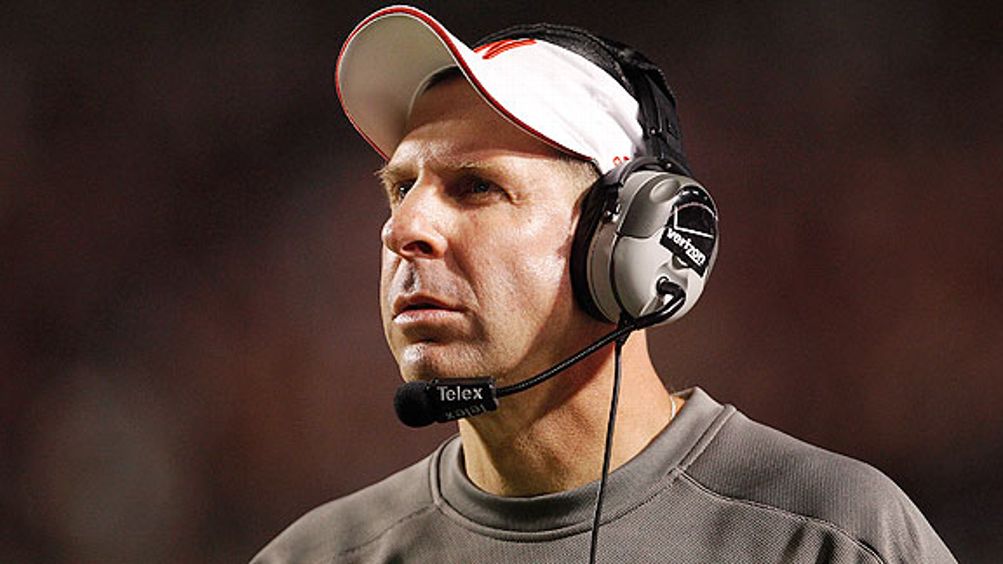 Coming next week: Tilt-A-Whirl, a segment that will finally start previewing on-the-field action. Do you feel it? The bullshit of the summer drying up and blowing away, replaced by interceptions and onside kicks and de-cleating blocks? It feels like … hope.

Aren’t muscles so last season? Isn’t it time to trade in that gorilla for a lean cuisine? Remember heroin chic? Well, get ready for Rocky Top quarterback chic, because I’m offering it up on a duct-taped platter in the form of Tennessee sophomore gunslinger Tyler Bray. He’s got the hearts of Vols nation in his gangly fingers, but who’s looking out for his heart? Why not you, sweetie? Tie an orange bow in your hair and make your play for this soon-to-be-too-famous-to-be-tied-down signal caller. Justin Hunter may be his soul mate on the field, but Tyler didn’t journey all the way from California for checkerboard end zones. This youthful field general isn’t afraid of a blitzing linebacker, and he isn’t afraid of love. Where he’s from there are no seasons, and where you’re from there’s only one: Tennessee football season. He may look like Lester Ballard, but he’s as complicated as a San Joaquin Zinfandel. Big Orange may still be a year away from competing for an SEC crown, but in the competition for Tyler’s affections, it’s now or never.

I’ve never written you before, so please forgive this meandering opening. (And I’ll forgive you for opening with confectionary Chattanooga.) I’m figuring some things out over here, or not figuring them out. You see, I’m not sure why, as a kid, I started rooting for Nebraska. I grew up in Florida, in a spot 1,500 miles better than Lincoln, a spot with a gulf full of grouper and oysters rather than a stagnant pond sheening with pesticide runoff. There were fragrant oranges hanging low for the picking. Ropa vieja and fried plantains. We had palm trees. Pigmentation. The Seminoles and the Hurricanes and the Gators. So what grabbed me, as a youngster, about Nebraska? I don’t know, Coach. That simple, honest red? Not scarlet. Not garnet. Not crimson. Not burnt anything. These guys were in an unimaginable (to me, who bought my first coat when I went to grad school in St. Louis) blizzard-whipped cornfield that you had to drive three days to escape — scant scenery, no famous music of the region, no amusing accents — and somehow they could get it together to whip anybody at football. Had to admire it. The lack of glamour. That offense so stubborn and repetitive it was almost elegant, and exasperating in its success.

This happens to every kid. It probably happened to you, Coach Pelini, way back when. For reasons that are later partly mysterious, you latch onto some team you have no business rooting for, and the affinity never fully goes away. I liked the Seahawks, too, as a little fellow, for some reason. The soft spot remains. Go, Coach Carroll!

Flash ahead a decade, to the Fiesta Bowl at the end of the 1995 season, when Nebraska, by a score that shall not be mentioned, ran roughshod over my Gators. Of course, this soured me on the Huskers for a while. (Now I see that game as a dose of humility we Spurrier-era Florida fans had been begging for, if not Spurrier himself, with his empty backfields.) The next year Nebraska did us a favor, losing to underdog Texas on that legendary James Brown toss on fourth down, smoothing our road to national championship position. But really it wasn’t until Nebraska fell on hard times a few years later, wrongly sent to the Rose Bowl for slaughter and then familiarizing themselves with all manner of lesser bowls, that I was able to cautiously return to them, that I was free to exercise that long-dormant muscle memory of clapping after an ugly Nebraska first down.

So, Coach Pelini, a couple of weeks ago I wrote a shrill letter to Good Old Coach Tressel, and afterward I got to thinking about the fact that this season I might find myself, for the first time in my life, rooting for Ohio State. I’m not proud of that, but I’m a sucker for an underdog. Can’t resist. Can’t help myself. Not that Ohio State will be a Vegas underdog in a bunch of games or anything, but you know what I mean. A spiritual underdog. The Buckeyes are down and kicked and they’ve got to drag themselves up. So I’m thinking about how weird it will feel to wish the Buckeyes well, to hope Braxton Miller emerges as a star and Luke Fickell can step in for his morally challenged predecessor and fight and claw and do something to be proud of. Very weird. What I know, though, is that this OSU nonhating is a temporary vice. It will only last one season. Next year they’ll get their big-name coach and they’ll go on to weather the NCAA trouble and get back to being Ohio State. And it was all this wanton wondering that led me to ponder the usual suspects to be the next bossman of the Horseshoe. Urban Meyer? It feels like that should bother me but it doesn’t. The guy did a great job at UF, and then when he couldn’t do a great job anymore due to exhaustion and crippling loyalties, he resigned. Got us two trophies without, thus far anyway, calling down the wrath of the NCAA. Gruden? It would be awesome to have that dude in college football. Just awesome. Chris Petersen taking his show to a major conference? Some famous and recently fired NFL coach getting the nod? Of all the names that have been bandied about, yours, Coach Pelini, is the only one that rankles me.

Coach, DON’T LEAVE NEBRASKA. Don’t go to Ohio State. I know you played there and that means a lot, so I guess I couldn’t hold it against you if you were lured to Columbus, but boy would we all be happy and impressed if you turned it down. Here’s the thing: The Buckeyes don’t need you. They may want you, but if they don’t get you, they’ll get somebody else who’s good and the sanctions will come and go and the program will resume its fairly foolproof recruiting and everything, soon enough, will be hunky-dory. They sure looked hunky-dory this past weekend, thumping one of the other numerous state universities of Ohio. Aren’t there, like, bunches of state schools in Ohio, just like in every other state? (University OF Nevada. THE University of Texas.)

Now, Nebraska on the other hand — we have reason to believe they need you. And the Big Ten needs a strong Nebraska. In the South, we’ve been making quite a bit of sport of the Big Ten for some years now, but in one fell theft it has won me over. Can’t speak for the rest of the South, but for me, all you guys ever had to do was add one more tough team and hold a championship game. Check and check. Gone is the oxymoronic “co-championship.” Michigan may or may not be rebuilding. Penn State has settled into a prolonged unfrightening era of being pretty decent. Wisconsin’s got its shit together. Way together. I worry, though. The conference at its modern worst is a conference that’s Ohio State’s to lose (like USC in the Pac-10 during the Carroll era), a conference composed of a bully and then a gaggle of band geeks who get together each year and elect one of the group to stand up to the bully on the understanding that none of the geeks will have to serve this undesirable duty two seasons in a row. With Ohio State in hot water and Wisconsin and Nebraska looking good, this isn’t currently the state of affairs in the Big Ten, but I worry. I do. I look to the recent past, and I look to the future.

If you leave, Coach (Cornhusker faithful, close your ears), there’s no reason, other than tradition I suppose, to believe Nebraska won’t fall into the dreaded ranks of the Cyclical Program. Maybe worse than cyclical. It didn’t take Solich long. Then Callahan and his West Coast offense and Coast-On-Into-The-End-Zone defense. It was like Metallica singing show tunes. West Coast? Decidedly not. The Blackshirts and runnin’ the ball. And a passing game that four or five Miami-area high schools would be ashamed to claim. That’s what Nebraska does, and you have them doing it, Bo. The identity of the program and the bent of your personality have seamlessly merged. That’s a special situation.

I appreciate that coaches, like anyone, want to move up in their profession, but as long as you’re at Nebraska, Nebraska has every chance to beat Ohio State. Maybe this scandal will hamstring the Buckeyes for a time, at the very least leveling the field for a couple of seasons, but look ahead five or six years and imagine you’ve been at Ohio State for four or five of those years. What do you see? Right. I see it, too. Huskers in trouble. I don’t like that. It’s a self-fulfilling prophecy: You stay at Nebraska and the move from Nebraska to Ohio State remains a lateral one. You go to Ohio State, and Ohio State becomes a step up.

Forget the future, though; we might all get nuked by the Russians tomorrow night standing at a urinal in the bathroom of an Outback Steakhouse. Right now what you have is Nebraska being Bo and Bo being Nebraska, and what appears to be a standup program populated with mostly standup guys — something not even the great Osborne could always claim.

Lastly, Coach, at the risk of being too Jiminy Cricket too often, I’ll appeal to your senses of decency and responsibility, senses that seem keen in you, and ask the following: Can we rightly expect players to put their teammates first, to care about honor, to not sell their gear and accept improper gifts, to not jump on the ME train when it rumbles by full of hookers and roulette wheels and agents’ runners — can we expect that of 19-year-olds when they so often watch their own coaches, at the sight of perkier contracts and wieldier recruiting, drop their clipboards, flick double birds at the athletic building, and hop into the back of a limo?

John Brandon is the acclaimed author of Citrus County. He’ll be writing weekly on college football for Grantland.