On Whiskey and Grease: Beyond Tequila 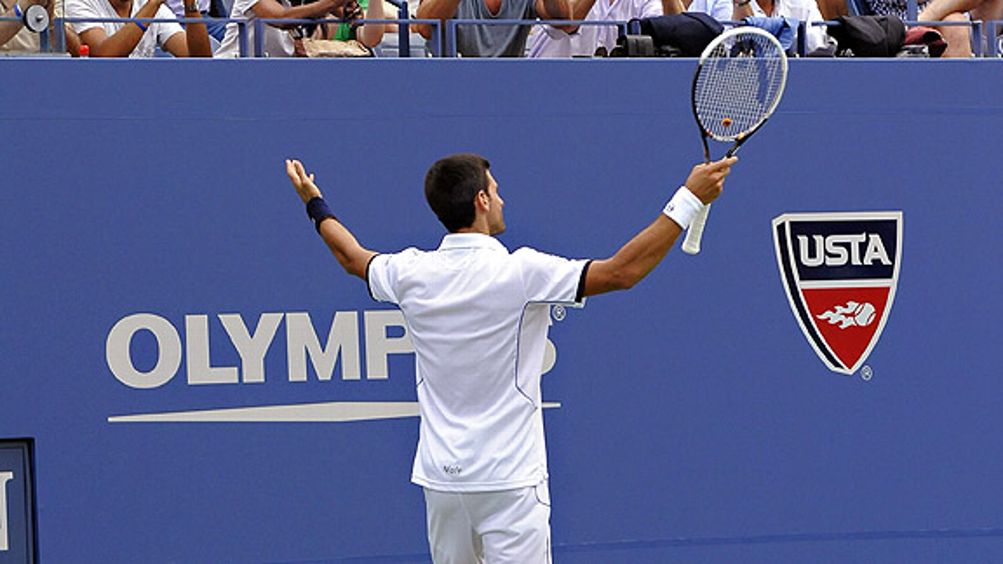 One way to think about losing a tennis match, and specifically to think about the pain and disappointment of losing a great, tense, five-set tennis match the way Roger Federer did on Saturday, is to imagine yourself walking in to talk to the media afterward. Imagine that you have just spent several hours doing a physically exhausting, phenomenally difficult thing; that many thousands of people, and several television cameras, were watching you do this thing; that you could not look up while doing it without seeing a giant image of yourself hovering overhead; that your entire life revolves around this thing to the point that most of your waking hours are consumed by your obsessive work toward the goal of doing it successfully; that this has been the case since you were very young, so that succeeding in moments such as the one you have just been through is effectively the only purpose you have ever known; that you have just done the aforementioned thing at such a high level that almost no one in the history of the world could claim to have done it better; that you failed anyway; and that you failed because of an outrageous bit of bad luck, which came out of nowhere and upended all your work at precisely the moment when you thought you had succeeded. There: Now ready to answer some questions?

There’s a certain death-type imagery from movies and TV shows that the situation calls to mind: a tight shot of a man walking down a long corridor toward a set of double doors; other people’s hands reach out on either side of him to open the doors; he steps through into a blinding white light. If you or I were to face this situation, having lost the way Federer did on Saturday, there’s a very good chance that our quotes in the next day’s paper would be dominated by transliterated weeping and hysterical blasphemy:

But the five-time champion, who hasn’t won a major since last year’s Australian Open, never recovered from the loss of those two match points, dropping the final four games of the fifth set and falling to a 7-6 (9-7), 6-4, 3-6, 2-6, 5-7 defeat. “Nyrrrrrrggggh!” he said after the loss. “Nyyyrrrrrrrgggh aaahh-ahh ahh-nrrrrrm! There is no God in the universe! Do you hear me, CBS??”

To his credit, Federer didn’t do this. Having played astonishingly great tennis against the world’s runaway no. 1 player, Novak Djokovic, whom no one else has even pushed to five sets this year, and having lost anyway, Federer mainly seemed dazed. That in itself was revealing; when you’ve won 16 Grand Slam titles, the way Federer has, dazedness at a tennis tournament is the equivalent of anyone else’s existential panic. But what left Federer stunned was one moment in particular, and at this point we need to pause to discuss that moment, because without understanding it we can’t understand either the match or, more generally, what can be so devastating and unfair about top-flight tennis.

For the sake of clarity, we can divide the moment into two parts, which I’m going to call The Shot and The Confrontation. The Shot came late in the fifth set. Federer had looked staggeringly good in winning the first two sets, almost like his old self, but then turned passive and sluggish in the third and fourth sets, both of which Djokovic won easily. In the final set, Federer surprised everyone, including the hugely pro-Federer crowd, by rallying, breaking Djokovic at love at 4-3, then giving himself two match points while serving at 5-3. On the first of the two, Djokovic flicked back Federer’s serve with a slappy, haphazard forehand — The Shot — that looked doomed but happened to drop inside the line. The crowd cheered, thinking the match was over, then fell into a murmury silence when it became clear that Djokovic had just hit a bafflingly great shot. That was when Djokovic produced The Confrontation. Turning toward the stands with an incredulous look on his face, he raised his arms up over his head like a pro wrestler, then broke into a dufusy grin. The crowd, uncertainly, started cheering. Djokovic kind of rolled his eyes and went back into his return stance with a look like, these people. After that, he loosened up, reeled off four straight games against a staggered Federer, and took the match.

That was why Federer was stunned. Having spent his entire adult life consciously molding himself into one of the best high-stakes tennis players in history, he’d just been beaten by an almost random sequence of events. Djokovic’s snapped return happened to land in bounds; the crowd happened to set something off in Djokovic’s head; this happened to inspire him to play better tennis. “I had it,” Federer said about the match. “There’s no more I could do. He snaps one shot, and then the whole thing changes. … To lose against someone like that, it’s very disappointing, because you feel like he was mentally out of it already. Just gets the lucky shot at the end and off you go.”

We want athletes to be able to explain sports. Sport, at its most basic, is about physically realizing intentions — calculating the angle, plotting the spin, executing the shot. So surely the people who have the intentions, the people whose inner lives sport is expressing in some complicated way, are in the best position to tell us what really happens on the court. And to a certain extent that’s true. But one of the reasons it’s so scary to imagine going into the postmatch press conference as a loser is that it’s not entirely true. What happens during a match may concern you to an emotionally devastating degree, but what happens can also turn on tiny fluctuations of chance so complicated that they are astoundingly difficult to articulate — minute physical differences that fall within any conceivable margin of error, emotional swings that could have gone either way and went against you, who knows why. These sorts of breaks are often monstrously unfair. And as with The Shot and The Confrontation, they tend to take on outsize importance in matches that are otherwise very close. Meaning that the greatest contests, the ones whose outcomes are most exalting for the winners and most devastating for the losers, are the ones most likely to be decided by infinitesimal turns of luck.

I want to be precise about this, because it’s not the case that Federer’s loss was purely arbitrary — had he not double-faulted on break point at 5-3 in the fifth, or committed 59 unforced errors, he could have won regardless of that one match point. But because all the athletic-skill stuff was so evenly matched, because the mistakes and heroic deeds all worked out to a stalemate, that one lucky shot — and even Djokovic agreed that it was lucky, although it’s possible that he was being modest — was able to change everything. If Djokovic wins against Nadal in the final, it won’t be an exaggeration to say that it changed tennis history.

Think about it: Djokovic goes from being a very good player whose season was tarnished by his inability to beat Federer (in the French Open semis and here) to holding three Grand Slam titles at once while being well on his way to completing maybe the best season in tennis history. Federer goes from being a player who can still beat the best to a definitively past-his-prime ex-champion who’s dropped two straight semifinals late-round matches in majors after winning the first two sets. Nadal goes from having yet another crack at his rivalry with Federer to losing to Djokovic for a legacy-unsettling sixth straight time in a final. All because of that one shot.

So it’s not hard to understand why Federer seemed dazed. The game can be pretty unjust. Actually, you could even say that what made this match so intense was not the quality of play — really high at times, but with a lot of errors — so much as the way all the minor injustices converged on each other. For instance: It was unfair that the crowd was dead set against Djokovic, who has worked like crazy (dancing, mugging, clowning around with various McEnroes) to win New Yorkers over since he first alienated them during a 2008 spat with Andy Roddick. It was unfair that the draw pitted these two players against each other while the second-seeded Nadal got to feast on Andy Murray. It was unfair that The Shot dropped in. It’s unfair, really unfair, that Federer is getting old. There was just an air in the stadium of quiet, objectless frustration, which hummed along under the tennis, raised the stakes, and helped the match feel semi-classic. But if you think about it too much, you wind up nearly as dazed as Federer.

Previously from Brian Phillips:
The Problem with Novak Djokovic
The Brash Style in American Tennis
When We Need Our Barbarians
Corruption, Murder, and the Beautiful Game: On FIFA’s scandalous history
On the Border: A look at the soccer rivalry between the United States and Mexico
Roger Federer, Novak Djokovic, Pete Sampras and the dead kings of Wimbledon