Oscar Second Opinion: The Artificial Intelligence of ‘The Imitation Game’ 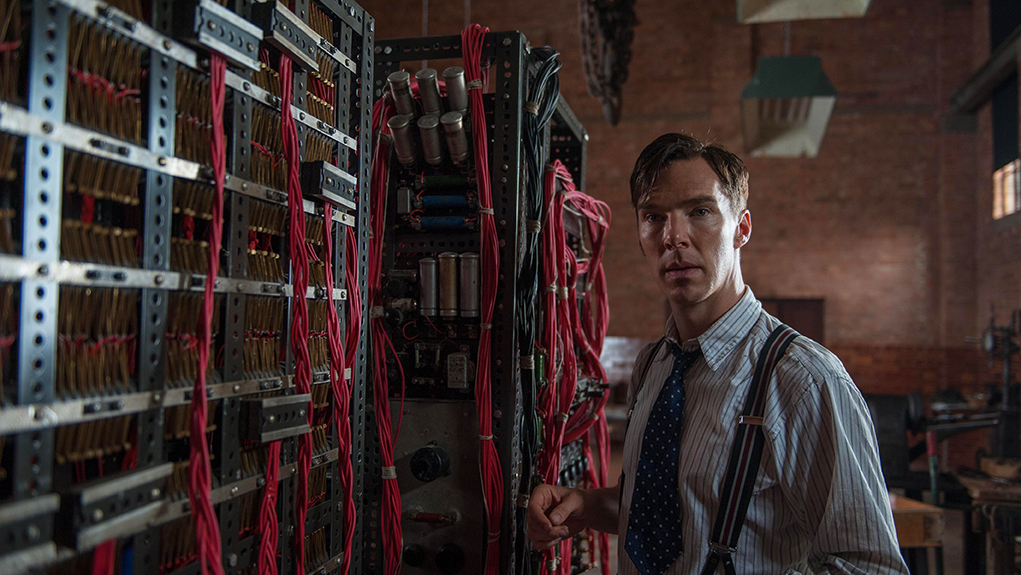 Hollywood loves making movies about smart people, but intelligence is hard to represent on film, for two reasons. The more obvious one is that intelligence is internal and movies aren’t. There’s no easy way for a film to capture the synapse-tesseract that makes one thought fly into another; having an idea may be the form of experience with the single smallest inborn quotient of screen-friendly drama. Play it too straight and you wind up with …

Doctor, the omega virus is killing a million people an hour. If you can’t find a cure, the United States government will fall within the week.

The second reason is that while good actors tend to be very bright people, most of them are not world-altering geniuses,1 and it turns out that being a world-altering genius is kinda tough to fake. You can’t just Method it out, you know? You don’t have the luxury of drawing on that day in ninth grade when you up and proved the Riemann hypothesis. It’s like playing a fish, or Gwyneth Paltrow: You’re trying to see the world through the eyes of someone whose mental structure is so different from yours that you can’t hope to fully understand it. In some ways, you’ll always be impersonating.

The Imitation Game, a room-temperature historical drama that’s pinch hitting as this year’s Competent Biopic at the Oscars, is about a very smart person. The mathematician Alan Turing, who lived from 1912 to 1954, led the (spoiler siren) successful effort to break the Nazis’ supposedly unbreakable Enigma encryption during World War II and (more spoilers, yell at me in a forum, I fear nothing) played a pivotal role in the invention of computer science. I went into the theater with middling-ish expectations that were mostly satisfied,2 but what really struck me was that the movie doubled as a mini-encyclopedia of mainstream filmic techniques for portraying intelligence. Every blinkblinkblink-pause-head-tilt, every normal-social-interaction-whooshing-past, every eureka-lightbulb beat — they were all in there, practically alphabetized. The movie is surprisingly funny for a tale about tragic mathematicians in wartime, and I think this is partly because the tropes are so shopworn that all the friction has been polished out of them. It’s The Big Bang Theory, only perched on the ledge of the apocalypse.

Real-life smart people are often a little crazy, but not like in the movies, where smart people are almost always flamboyantly nuts. Insanity is an asset to a director because, while it’s as inward as intelligence, it’s something we understand in terms of behavior; we measure it from the outside. That’s what you need to enable if you’re going to portray intellectual power in a medium that can’t depict interiority. A genius who just thinks something up is opaque to film, but a genius who slips in the bathroom, bangs his head, and wakes up with the flux capacitor? That’s a character. My favorite device in this vein is the one where the smart person starts frantically taping pages of notes and sketches to the wall, connecting them with lines of string or whatever, to create a sort of tourist’s fold-out subway map of thoughts. It literally draws a picture for the audience: So that’s what it’s like in there! It’s never morons who do this, even when the thought-collage is meant to illustrate actual crazy and not merely high-IQ nest-lining: brilliant lunatic Claire Danes from Homeland, meet brilliant lunatic Russell Crowe from A Beautiful Mind. The Imitation Game has one of these scenes, too, although it’s comparatively restrained since Turing is only eccentric-spectrum-crazy and not full-on schizophrenic (side note: The Imitation Game will not win Best Picture).

Turing is portrayed in the film by Benedict Cumberbatch, best-known for playing another very smart person, Sherlock Holmes, in the BBC series Sherlock. It’s a totally different performance, though, one that dials Sherlock’s baritone invincibility down to a quieter, more fragile plane. Turing was gay, and — obviously, I guess, given the period — closeted, and he killed himself after he was found out and put on trial. It’s one of the ugliest stories of the postwar era; Turing was a genuine war hero, staggeringly important to his field, and this is how they repaid him? The movie doesn’t do it justice,3 because the movie never really decides what part of Turing’s life it wants to be about. (It does a lot of skipping through time, like advanced physics, only with frequent Cumberbatch voice-overs, which, frankly, advanced physics could use too.) But Cumberbatch gets something of that vulnerability, how this person could bring down Hitler but be shattered by public disgrace. It’s a good performance, just made of conventional materials.

You could say the same for the movie itself. The screenplay is structured like a puzzle (theme button: ciphers) and the story revolves around complex encryption (theme button: secrets,)4 but you’ve seen most of it before. The film should have been less by the numbers and — blinkblinkblink — more about them, or something. I mean, this is a movie about math that gets every period raincoat exactly right but mispronounces the name of 18th-century physicist Leonhard Euler. It doesn’t rhyme with “Bueller,” except in this universe.

Super Bowl Commercial Shootaround: All the Fast Cars, Cool Insurance, and Unfathomable Sadness We Can Sell You Between Timeouts