Can Ryan Fitzpatrick Save Buffalo? 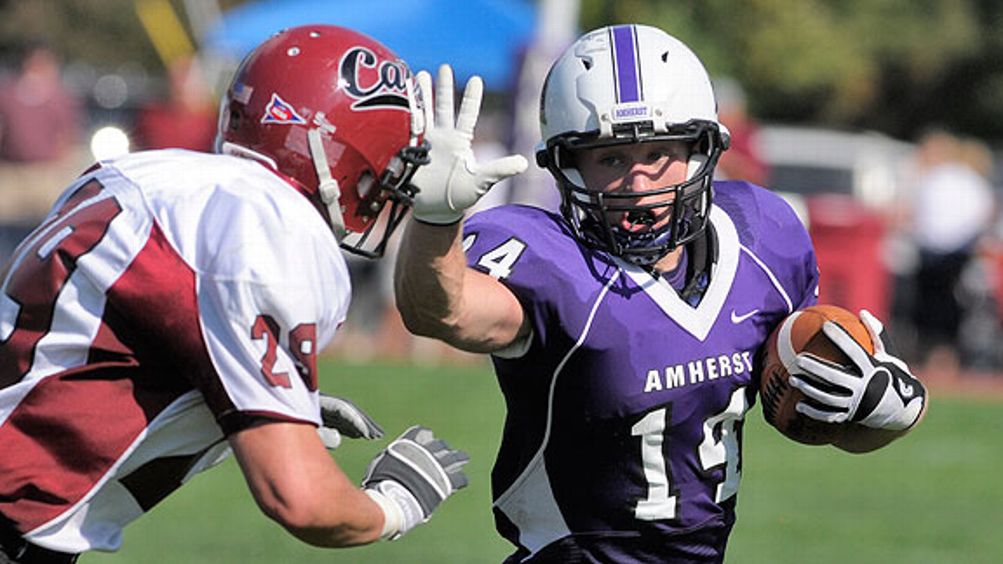 “Watch a major college game, and the action gets weird. You immediately see plays that simply can’t happen in a pro game. At the subdivision and Division II tiers, things get stranger still. And by the time you hit Division III, you begin to see football games that are more philosophical than technical. With no athletic scholarships and extremely limited resources, football becomes a game in which the system matters more than the play calling or the personnel. The polarities become acute. This is where you find the most extreme versions of contemporary football: This is where you find teams that still live in the 1950s and teams trying to play basketball on grass. This is the level where football changes — and also where it doesn’t change at all.”

A Volatile Week in the NFL Stock Market

“Recently in the Grantland offices, we developed a nasty conversational habit of discussing everything like stocks. As in, ‘I’m in on the new security guard, I’m buying 500 shares of him’ or ‘I can’t believe how much I enjoy Diet Dr Pepper, I’m selling my Diet Coke shares.’ It’s a stupid, indefensible, annoying and strangely addictive gimmick. Things went too far when the buying/selling routine started affecting my approach to football gambling — specifically, the days leading up to Week 2 in the NFL, that 120-hour stretch when we stare down eight to 10 teams and wonder, ‘After what I just witnessed in Week 1, am I in or out?’

“In this respect, Dead Island is a goddamned mess. Know that I was not expecting Dead Island to have an involving story (it does not) or any interesting characters (they are vile), though I was worried — accurately, it turns out — that it would try its hand at providing both. What I did expect from Dead Island, at the very least, was a viscerally diverting few hours of chopping up and running from zombies. And it did give me that, to some extent. What I did not expect from Dead Island — and what it doggedly, depressingly, and finally infuriatingly provides — is an experience woefully bound up in a concept that only recently leapt the transom of academic gamer discourse and is now being pondered in corporate boardrooms around the world. I speak of Gamification.”

“In December 1998, Grimson fought a young Prairie kid and member of the Colorado Avalanche named Wade Belak. It was only the ninth fight of Belak’s career; like Grimson before him, he was trying to establish a reputation for fearlessness, for toughness. Like Grimson, Belak had no illusions about what was expected of him and his career. He understood the perils that he faced, the potential costs of his profession. Both men had done their math. Maybe they wouldn’t be the players they had dreamed that they might be, but they would be players, at least.

“Two weeks ago, Belak, 35, arthritic and facing down his first winter without professional hockey, hanged himself in a Toronto hotel room. His was a stunning death for a thousand reasons, but not least because, on the surface, he was buoyant and funny, a happy presence so long as he wasn’t trying to fill you in.

“He was also the third young man, each of whom had made his living by fighting on ice, to suffer a self-administered death this summer. Two weeks earlier, Rick Rypien, who had been signed to protect the reborn Winnipeg Jets this season, died of an apparent suicide in his Alberta home. In May, Derek Boogaard, one of the most feared fighters in the league, died of an accidental overdose of painkillers and alcohol in the middle of a post-concussion haze.”

“When did we first realize that Bucky Larson: Born to Be a Star might be something special? We admit it, we came to the movie late. It doesn’t even appear in our first Worst Picture predictions, made back in July. But, like every Razzie expert out there, we found ourselves hearing more and more whispers about it as the summer progressed. Last month we ran into one of our best studio sources — let’s call him ‘Jeffrey Katzenberg’ — at a party in the Valley, and he sidled up to us and whispered, ‘I got two words for you: Bucky. Larson.'”

By Michael Davies and Roger Bennett

“With the devastating emptiness of the international break firmly behind them, Roger and Michael return to discover soccer, America’s sport of the future since 1972, making further inroads into U.S. popular culture.

“The fully-blazered men discuss whether a two-team league is bad for the Premier League, decide on the greatest soccer movie of all time (SPOILER ALERT: It’s not Ladybugs), and concoct a brilliant scheme to make a certain perennial 5th division dweller ‘America’s Team.'”

“For now, though, we present our totally biased guide to the 25 new programs debuting in the next two months. Supplemental drafts will be held for midseason replacements. (ABC’s cross-dressing disasterpiece Work It is an Andrew Luck-sized talent almost worth tanking the first half of the season for.) And despite a slew of extremely dubious new programs (hello, Boss!), cable series are off-limits, as they are almost never cancelled outright, merely left ‘unrenewed’ at the end of the season. (RIP, Terriers!)”

How Do NFL Linemen Drop the Weight?

“Damien Woody is trading a year for a life. The weight that prolonged his career as an offensive lineman is now a threat to sustaining his retirement. His goal in the next 12 months is to shave off about one-third of the 345 pounds he once carried. While he played, the need to drop down to a healthy weight was compromised by the demands of life in the trenches. Now he knows that his life depends on it.”

“There are several reasons why Justin Verlander is getting more MVP love than any pitcher in years. Going 23-5 with a 2.36 ERA helps. So does playing for a winning team that’s exceeded expectations.

“But maybe the biggest reason Verlander’s the biggest media darling since Shannon Stewart (circa 2003) boils down to the convoluted way in which MVPs are often chosen: He seems to have fewer great teammates than any other candidate on a contender. The Tigers are being painted as a mediocre team that Verlander carried to glory.

“Which is a big, steaming pile of wrong.”

One of the Only Female GMs in Baseball

“This is where baseball cognoscenti come to see the future of the game played against the scrim of the past; where the best seats in the house are beach chairs and blankets splayed on the grass behind first base; where the price of admission is the cost of a raffle ticket. This is where fireflies vie for attention with cartwheeling 5-year-olds and ballpark franks are cooked on charcoal grills hauled to the park by volunteers; where players swing exclusively wooden bats, some made 23½ miles down the road by the Barnstable Bat Company; where major league scouts cluster behind home plate hoping to spot the next Thurman Munson or Nomar Garciaparra; and where women, from league president Judy Walden Scarafile down to Mrs. Firebird, wife of the team mascot, have a loud voice in how the game is played in the most prestigious college summer league in the country.

“I found Sue Horton, general manager of the 2011 Eastern Division champion Orleans Firebirds, sitting on a warped wooden bench to the right of home plate, one of the few actual seats in the park. Players call her Miss Sue.”