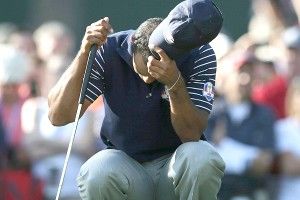 When I stood on the fringe at the 18th green and watched Martin Kaymer sink his par putt to finish the improbable European comeback and end the 35th Ryder Cup, I was a mess of mixed feelings. On one hand, I was grateful to be witnessing a historic moment — the largest Sunday comeback on foreign soil in the history of the event. Ian Poulter’s heroics on Saturday night will stay with me forever, and just being on the course for a tournament that I’ve mythologized and romanticized since childhood was a thrill. On the other hand, I felt sick to my stomach that the Americans were actually going to lose. With that nausea came guilt, because at the start of the day, with the home team holding a 10-6 lead, I was hoping that Europe would make a run to keep it exciting. Who wants a blowout on singles Sunday? But as the score got closer and closer, and the awful reality set in, I could only admonish myself in hindsight: Be careful what you wish for.

And something curious happened after Kaymer’s putt. The Europeans mobbed the green, their fans erupted in song, and then they all had to stop. The reason? Tiger Woods was finishing his match against Francesco Molinari. The result had become irrelevant, but Tiger still seemed to care. He missed a short putt on the 18th and halved the match, and the celebration was back on. But as I watched Tiger finish, I thought about his Ryder Cup legacy, and I had to get this final thought off my chest before moving on.

Why Tiger Woods Is a Bad Ryder Cup Teammate

It’s an impressive résumé, but it leaves a nagging question: Why does he hold a 9-16-1 record in Ryder Cup pairs matches?

One tempting explanation is that his teammates are letting him down. Jim Furyk himself supported that explanation this week when told of Tiger’s singles record. And while it may be true in certain cases that his partner hasn’t played well, that explanation reeks of over-simplicity. He’s been paired with 12 different golfers in 26 matches; could they really all have been that bad? And if they were, why? Others offer the theory that the Europeans play well against Tiger because his reputation fires them up, and they know that beating him is a psychological statement worth more than just a single point. But again, it doesn’t make sense. Throughout his career in major tournaments, we’ve seen the opposite effect, where players seem to be intimidated and shoot high scores when paired with Woods. When someone actually stands up to him, like Y.E. Yang at the 2009 PGA Championship, it’s big news.

Neither of these explanations feels satisfying, but after watching Woods up close this weekend and following his Ryder Cup career for years, I’d like to advance my own theory. It’s based on two words: perfectionism and negativity.

With Woods, those concepts go hand-in-hand. Even before his personal life blew up in 2009, he was a temperamental golfer. He swore on the course, he threw clubs, and he seemed to spend large portions of every round down on himself. He comes from the school of third-person self-admonishment, as in, “Oh, Tiger, what are you doing?!” He expects every shot to be perfect, because that’s his style, and it results in a maelstrom of negative energy.

That combination works for him as an individual golfer (or, at least, it used to). But in group matches at the Ryder Cup, it’s poison. As an inherently selfish person — and here I hasten to add that my take on Tiger Woods is mine alone, though it’s bolstered by the observations of media members who have followed him for most of his career — Woods has no intuitive understanding of a team dynamic. Here’s the one thing he does understand: You can’t be negative about your partner’s play.

From what I could gather, he considers that single bit of decency to be a complete philosophy about team play. On the surface, it makes some sense. Don’t be mean to the other guy when he fails, and play your best. Simple, right? But in practice, it’s a woefully incomplete viewpoint, and it ignores the psychological dynamic of pairs golf.

When Tiger makes a mistake, he lashes out at himself. Since he’s such a huge personality, Tiger’s inner fury is very public, and it becomes the story of the round. There’s no room for anything else. The negative energy, which apparently fuels him in stroke play, serves to isolate his partner. I saw this on the 16th tee on Friday morning with Steve Stricker, in a match they were about to lose. Tiger was mad about his play, and he was as emotionally distant from Stricker as possible. It left Stricker on an island, playing his own game but infected by the poison coming from his teammate.

What Woods doesn’t understand, and what’s so critical in any team sport, is that it’s not enough to forgive your teammate. And while this may seem like the kind of canned wisdom you find in a Chicken Soup book, it is absolutely true that you also have to forgive yourself. Or least give the impression of forgiving yourself. Anything less, and you infect the atmosphere. After all, how can someone like Stricker respond to Tiger’s negativity? He’s a smart man, and he can read the attitude. And he knows that if Tiger is this negative about himself, it means his mind is lingering on bad shots and he cares more about his individual play than what happens with the team. As a teammate, it must leave you feeling empty. Momentum is everything in the Ryder Cup, and if you can’t live vicariously through your partner’s shots when you’re struggling, you can’t build momentum. It’s also a pretty good guess that even though he hides it, Tiger is judging you for your bad shots as much as he judges himself. Is it any coincidence that the stretches of success the two enjoyed were built on individual runs? It was either Tiger or Stricker, never a working combination.

Maybe this comes off like mind-reading hokum, but in yesterday’s piece I told a story about Ian Poulter on the 16th fairway in his Sunday singles match, where he was all square against Webb Simpson. Just as he took his iron shot, Phil Mickelson sunk a big putt on the 14th green behind him. The timing couldn’t have been worse; the roar went up just as he swung, and he chunked the shot about 40 yards short of the green. It was his worst shot of the Ryder Cup, and it came at a critical time.

So what did Ian Poulter do? He laughed. He actually laughed, and it was stunning. Can you imagine how Tiger would have reacted in that same situation? He might literally have attacked Mickelson with his 3-wood. But Poulter put it behind him immediately, hit a beautiful pitch, nailed the par putt to halve the hole, and won the match in 18. It reminded me of an earlier quote from Justin Rose, who said that he and Poulter are such a successful Ryder Cup team precisely because they don’t feel the need to apologize to each other after a bad shot. And Poulter’s laugh told me that he also doesn’t need to apologize to himself. He has an intuitive sense of who he is as a golfer, and also of what’s needed to win the Ryder Cup.

Tiger Woods is one of the game’s great winners. He has 14 majors, he performs well under pressure, and it needs to be said that he played some very, very good stretches of golf with Stricker this weekend. But it’s also no coincidence that he keeps losing. For all his incredible talent and mental toughness, he’s incapable of making the necessary mental commitment to be a good teammate. He knows how to bring himself up, but he can’t quite figure out how to stop bringing everyone else down. And as he made his runs on the back nine on Friday and Saturday before inevitably coming up short, the paradox was on full display — the virtuosic genius, and the debilitating limitations.