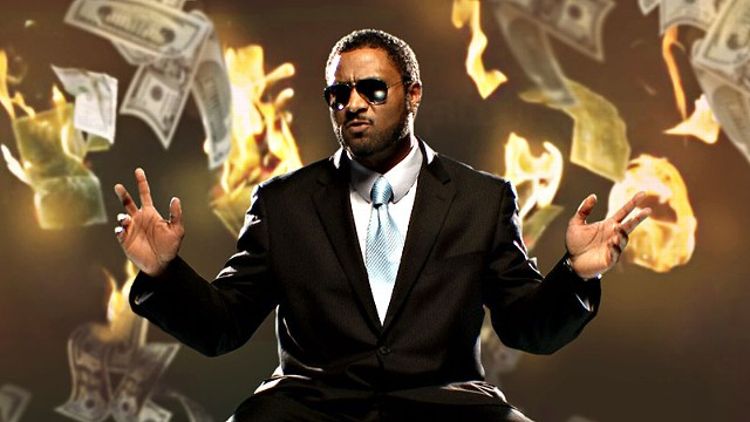 Almost nobody looks healthy in Broke, the ESPN 30 for 30 documentary about the frequently ravaging effects of big money in professional sports. The former players — men like Curt Schilling, Keith McCants, Leon Searcy, and Bernie Kosar — who sit before the camera have spent everything and spent it foolishly, sadly, rapidly. They look tired, spent, hollowed, bloated, prematurely old. With an exception or two, bling clearly got the best of them. But Andre Rison graces the camera wearing large aviator glasses and a dark suit that doesn’t quite fit. Even though you can no longer see what once was a very handsome face, he looks like extravagance has blown up on him like an exploding cigar. He looks blung.

Without commercials, the documentary runs 77 minutes but easily could be turned into a Roots-style, multi-night saga focused on each man’s financial collapse. Rison is a particularly compelling ex-millionaire. In 13 seasons with the NFL, he had it all, lost a lot of it, got a lot of it back only to lose most of that. In 1995, Rison signed a five-year, $17 million contract to the Browns, which was then the most lucrative ever for a wide receiver. Earlier this year, he was sentenced to five years’ probation and fined $300,000 for failure to pay child support.

In his day, he was the first intersection of hip-hop, profligacy, romantic obsession, Creedence Clearwater Revival, and comic books. During his first decade in the NFL, he was called “Bad Moon” Rison, and he exuded as much danger and tempestuousness as he could, talking trash, berating coaching staffs and teammates, skipping meetings. He brought a cocky energy to the Falcons, Packers, and Browns. He was brash. He was a headache. For the Chiefs, he tried to make himself over as Spider-Man, shooting imaginary webs with every reception.

But what’s most popularly recalled about Rison was his rocky relationship with Lisa “Left Eye” Lopes, the gnarling rapper third of TLC. In the 1990s, Lopes and Rison were at the height of their fame, power, and productivity. Rison spent four seasons with the Falcons and owned a two-story stucco mansion in the chi-chi Atlanta suburb of Alpharetta. At the time, he had a kind of Harlem Renaissance dapperness; when he and Lopes appeared in an Atlanta courtroom in October 1993 after an incident in which he’s alleged to have hit her and fired a gun, he wore a great, loose double-breasted suit, a printed tie, and a tiny mustache. You could see what Lopes might have seen in him. He didn’t look like a troublesome football player. He looked like a DeBarge. This was during an era when the prevailing style ideas for men still involved some degree of pimpery. Even under the dejecting municipal-court circumstances, Rison was strikingly handsome.

The following year, the volatility of their love spilled again into public view, when Lopes set a fire in a bathtub of the mansion that spread to the rest of the house until it burned to the ground. She later said she wanted to purge the demons of that house. I wasn’t watching much football in 1994. I was a teenager. But I listened to a lot of TLC and was obsessed with Lopes’s nasal, boing-boing approach to rapping. She was very clever, and in that cleverness was an element of crazy. The smoking ruins of Rison’s home were the proof. But the fascinating thing about these two was that they never quite gave up on the relationship. And at the height of his football career, he was, to a lot of the world, the fool who stayed with Left Eye. And she was the nut who stayed with him. But you could understand what they might have seen in each other. They had crazy in common. In 2001, he channeled his best Tupac and rapped with her on a song called “Rags to Riches.” The next year she was dead, after a car accident in Honduras.

Broke is too general a cautionary tale to dwell on the effect Lopes’s death might have had on Rison. His financial troubles appear to have nothing to do with losing her. But he cuts such a strange, damaged figured in his portions of the film. The glasses convey a kind of mourning and shame, like he can’t believe his life, either. Rison’s now dealing with his legal issues and coaching and mentoring students in Michigan, hopefully doing for them what no one could for him: saving them now from their future selves.