Which Old Guy Without a Stanley Cup Should You Be Rooting For? 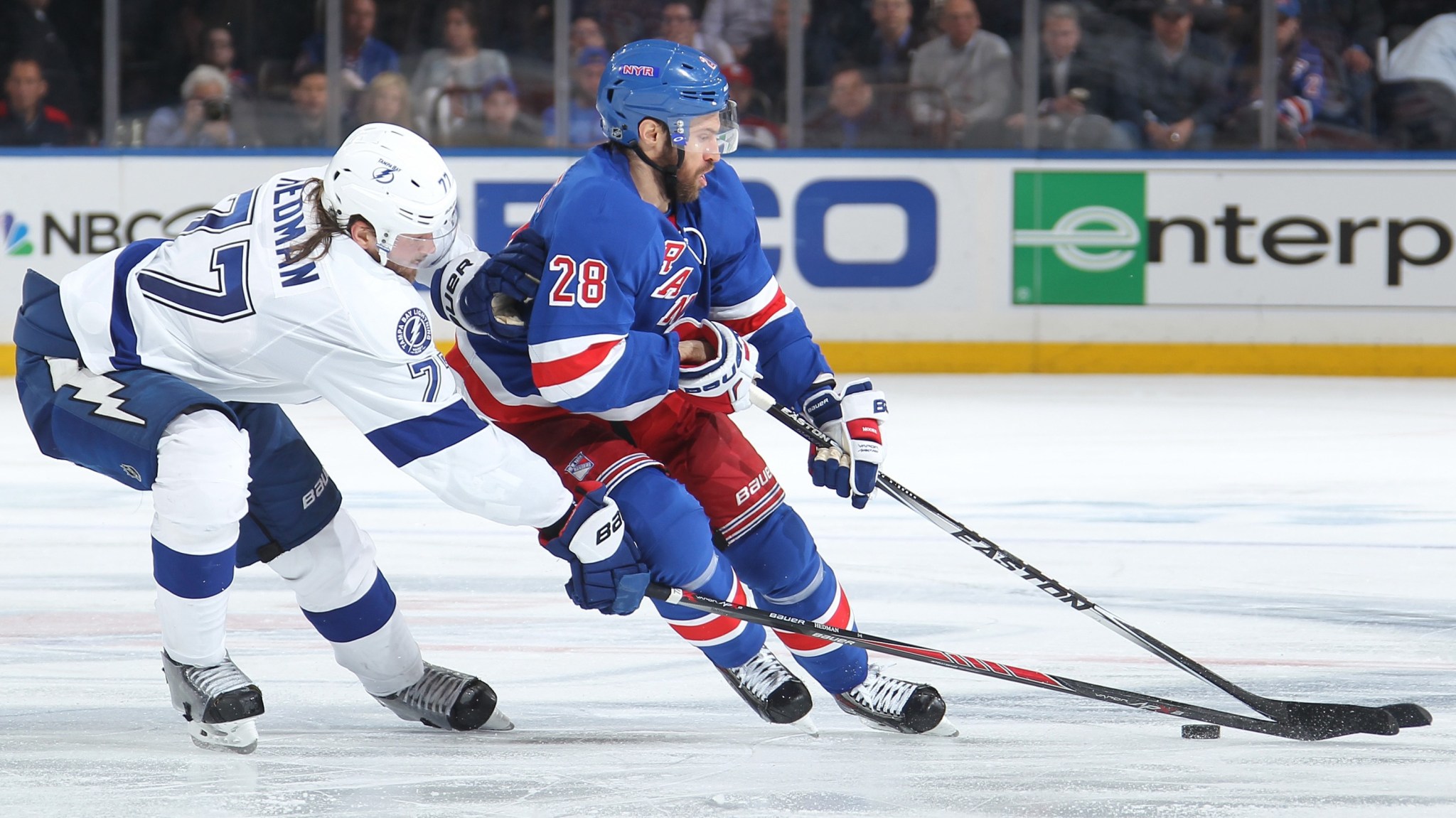 As we inch our way through the NHL playoffs and draw closer to the appearance of the Stanley Cup, we’ve reached the point when we can get started on one of hockey’s most cherished springtime traditions: It’s time to start hunting OGWACs.

That stands for “Old Guy Without a Cup,” the beloved specimen of hockey player who finally finds himself on the verge of his first championship after a long career. Fans love OGWACs. Their teammates love them, too; they’re often the first guy to get their hands on the Cup when it’s passed around. The greatest OGWAC story ever told is that of Ray Bourque back in 2001, when he finally lifted the Cup in his very last NHL game after 22 Hall of Fame seasons. Other memorable OGWACs include Teemu Selanne in 2007 and Lanny McDonald in 1989; just about every team that wins a Cup has one or two.

But which of this year’s OGWACs should fans be rooting for? Let’s take a look at all the players still left in the playoffs who are (a) over 30 years old, (b) in at least their 10th NHL season, (c) playing a regular role for their team, and (d) lacking a Cup ring. By my count, that gives us 12 guys to consider. And while any of them would make for a good story, some would be better than others.

Experience: At 32, he’s finishing up his 11th NHL season.

Sympathy factor: If you’re a Hawks fan? Not high. Vermette was the team’s big trade-deadline acquisition, and he’s been a bust so far.

OGWAC rating: 1/10. Wait, how is it that Antoine Vermette is 32 years old but still looks exactly the same as he did in his rookie year?

Near miss: Fleischmann was a member of those Washington Capital teams that suffered playoff collapses in 2009 and 2010, then was shipped out as part of the misguided shakeup that followed.

Sympathy factor: He suffered a blood clot in 2009 that threatened to derail his career, but recovered.

OGWAC rating: 2/10. Fleischmann is a likable enough player. But he’s been a Duck only since the trade deadline, so even if Anaheim wins he’s going to have to wait at the back of the line for his Cup handoff.

Experience: He’s 30 and finishing off his 10th NHL season.

Near miss: He was part of the 2010 Flyers team that made a surprise run to the final, then lost on an overtime goal by a former no. 1 overall pick that they would have drafted if they hadn’t lost the lottery three years earlier. I feel like we don’t make a big enough deal out of that one when we’re talking about brutal losses in recent sports history.

Sympathy factor: He wants to win a Stanley Cup, but he’s spent most of his career with the Sharks and Flyers.

OGWAC rating: 3/10. Should we be at all concerned that the Lightning apparently looked at their leaky blue line and thought, You know what would fix this? Ex-Flyers!

Near miss: He was a teammate of Carle’s on that 2010 Flyers team.

Sympathy factor: Ideally, you’d like an OGWAC to have overcome some sort of personal adversity at some point in their career. In Coburn’s case, he was drafted by the Thrashers.

Experience: He’s 30 years old and in his 10th NHL season.

Near miss: Like many of this year’s Rangers, his closest call came last season when New York made it to the final before losing to the Kings in five. He also had a couple of trips past the first round with the Predators.

Sympathy factor: He had to recover from a broken arm to make it back into the Rangers’ lineup last round. There’s also this, via Wikipedia: “On December 9, 2014, Klein lost part of his left ear on a high stick in the first period of a game against the Pittsburgh Penguins. He had it stitched back on, came back to play, then scored the game-winning goal in overtime.”

OGWAC rating: 4/10. How can you root against a guy who’s basically the NHL’s Mick Foley?

Experience: The 30-year-old is in his 11th NHL season.

Near miss: Kesler just missed a Cup in heartbreaking fashion when the 2011 Canucks imploded in the final against the Bruins. (For extra credit, he was also on the U.S. Olympic team that lost the gold medal to Canada in overtime in 2010.)

Sympathy factor: Kesler certainly has more star power than some of the other guys on this list, and he seems to desperately want to win a Cup. But that desperation was part of what led him to orchestrate a trade out of Vancouver, and that won’t sit well with some fans.

OGWAC rating: 5/10. If he wins the Cup this year, will he have earned it, or did he just get himself airlifted to a contender at the right time? I lean toward the former, but your mileage may vary.

Experience: The 33-year-old grinder is in his 11th season.

Near miss: None. Despite his long career, this is Jackman’s first playoff action. He spent the early part of his career bouncing around bad teams that never made it. He was traded to the Ducks last season, but didn’t dress for any of their playoff games.

Sympathy factor: Solid. Jackman is a classic grinder; he’s never scored more than 10 goals in a season. And he’s endured a tough year, getting KO’d by John Scott in December and missing more than a month with an injury at the end of the season.

OGWAC rating: 6/10. Waiting 10 years to get your first shot at the playoffs? We could do worse.

Near miss: After playing just four playoff games in nine seasons with Columbus, Nash was traded to the Rangers and came within three games of winning the Cup last year.

Sympathy factor: This one kind of depends. The big story with Nash has been his lack of playoff production — he’s one of the league’s better goal-scorers in the regular season, but has just seven in 56 career playoff games. If he could get hot over the last two rounds and lead the Rangers to a Cup, he’d be a great story. If he stays cold and they win in spite of him, it’s fair to say there will be some mixed feelings.

Near miss: He debuted with the Stars the season after they won the Cup in 1999; that year’s team went back to the final but lost. Since then he’s had several trips to the second round and one to a conference final (back in 2008). He’s spent the last few years of his career bouncing around contending teams like the Penguins and Blues, but hasn’t been able to find that ring.

Sympathy factor: He’s a veteran who plays a physical game, so he’s made a few enemies along the way. But it’s hard not to feel for a guy who’s played as long as he has without getting his name on the Cup. And it’s not like he’s just been a passenger along for the ride — he has three career playoff OT goals.

OGWAC rating: 8/10. Not everyone will be onboard, but Morrow is pretty much the archetypal OGWAC.

Near miss: This photo from last year’s final says it all.

Sympathy factor: I’m not sure “sympathy” is the right word for a guy whose life story includes phrases like “sports star” and “millionaire” and “rock band” and “fashion model.” But it’s just about impossible not to root for Lundqvist, one of the league’s most likable stars and a player who’s almost single-handedly dragging the Rangers through another long playoff run. It’s weird to think of him as being old, but at 33 he’s getting dangerously close to the point where many goalies start to decline. This probably isn’t his last shot at a Cup, but it’s one of them.

OGWAC rating: 8/10. But seriously, if we find out he’s also secretly an astronaut, then screw him.

Experience: He’s 40 and in his 16th season. Given how little he’s playing these days, this is almost definitely his last chance at a Cup.

Sympathy factor: Enormous. For one, he’s a well-respected veteran who’s been around forever without getting a ring. He has also battled blood clots in recent years, including ones in his lung last summer that cost him most of the season and seemed to have the potential to end his career. He came back just in time to be dealt to the Hawks at the trade deadline, but hasn’t played all that well since. He could even end up being a healthy scratch at some point soon. He’s had a great career, but right now it’s hard not to watch him play without hearing a clock ticking.

OGWAC rating: 9/10. Timonen is the classic “one last shot” veteran story that’s almost impossible not to root for.

Near miss: Take your pick. Moore has carved out a niche as a dependable third-line depth guy, which has made him a frequent trade-deadline target for contending teams — he’s played for nine teams and has been traded late in the season four times.1 In addition to being part of last year’s Rangers, he also went to a conference final with the Canadiens in 2010 and the Lightning in 2011.

Sympathy factor: On its own, his playing career would make him an easy pick — he’s a classic case of a guy who’s made it more on smarts and work ethic than pure skill. But his off-ice journey has been even more inspiring. He sat out the entire 2012-13 season after his wife, Katie, was diagnosed with cancer; she passed away that January, and he went on to found and serve as the executive director of the Katie Moore Foundation. He returned to the league the following season, and was honored with the Masterton Memorial Trophy for perseverance and dedication to the game. I dare you to read this without getting choked up.

OGWAC rating: 10/10. If you didn’t cheer when Moore scored the late winner in Saturday’s Game 1, I don’t know what to tell you.

Fowl Play: The Goalie Who Is Anchoring the Ducks' Postseason Surge