Fowl Play: The Goalie Who Is Anchoring the Ducks’ Postseason Surge 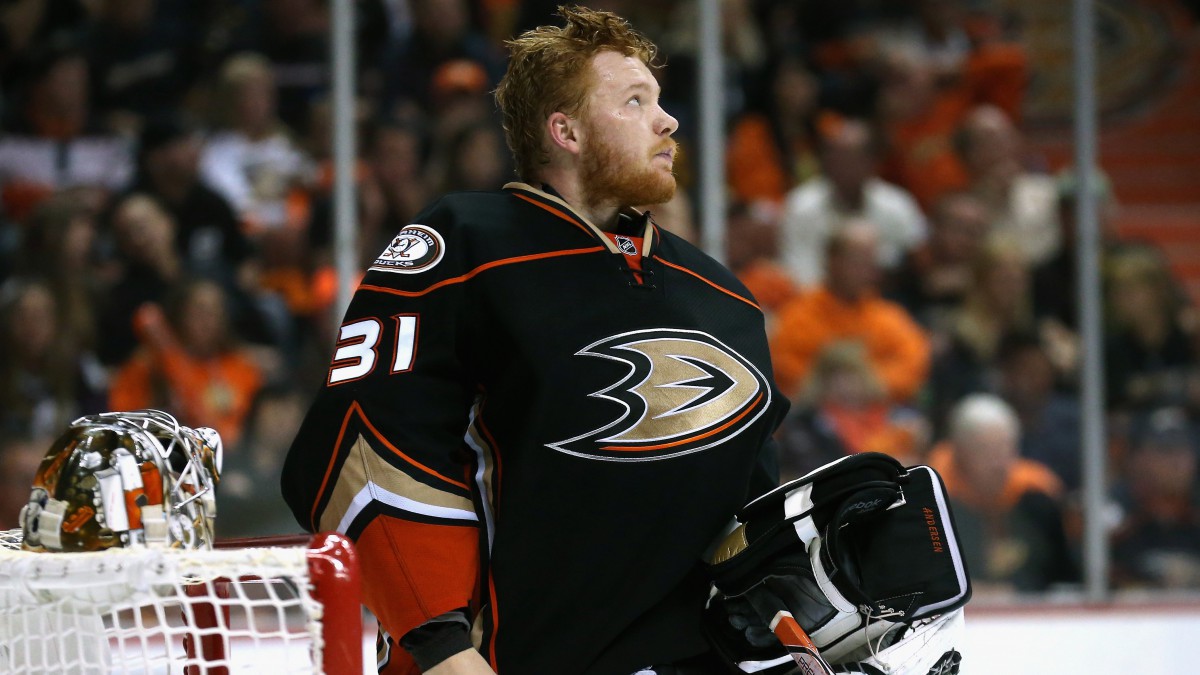 It was a rare meltdown given his relatively placid recent past (although last year he did take out some anger on an innocent table after being pulled from a playoff contest against the Dallas Stars), but it was easy to understand his frustration: Here was a game that featured a Ducks comeback from a 2-0 first-period deficit; a hilarious header goal by Chicago’s Andrew Shaw that left observers overjoyed even if it was ultimately overruled; and a combined 113 saves between Andersen and Chicago’s Corey Crawford.

For the Ducks, the game was a chance to take a big 2-0 series lead; for the Hawks, it was a shot to avoid that fate and snag a small piece of home ice advantage going forward. For neutral fans, it was the kind of game you secretly hoped would go on until someone cried uncle, until daylight had dawned on the East Coast and players could no longer properly operate their quads.

Instead, with less than four minutes to play in the third overtime period, Brent Seabrook took a knucklepucky shot from the point, Andersen got a small piece with his stick, and the puck caromed right to a lurking Kruger, who batted it into the net. It’s no fun to lose at home in multiple overtimes, particularly when you’re the last line of defense. Andersen called it a “tough pill to swallow” and spoke of the need to have a short memory after such a long slog.

On Thursday night, Andersen stopped 27 shots as the Ducks took Game 3 in Chicago to regain a 2-1 series lead. He made a big save on Kris Versteeg with the score tied 1-1 in the second and was particularly strong in the final minute of play, denying a flurry of Blackhawks attempts from all over the zone, including a glove save on a Marian Hossa snipe from the point.

When the game ended, Andersen emerged with the best overall postseason save percentage of the remaining four goalies in the playoffs — a group that includes Henrik Lundqvist, Cup winner Crawford, and Vezina Trophy candidate Ben Bishop. Not bad for a guy who never had too firm a grip on the starting job in Anaheim this season.

Last year in the playoffs, Andersen lost the starting job to Jonas Hiller, who lost it to swaggering rookie John Gibson. This season, Andersen and Gibson competed for time in net, although various injuries led to such oddities as infamous philosopher Ilya Bryzgalov being given a few shots, which ended about as well as if they’d all been made out of vodka. With Gibson sidelined with an upper-body injury heading into the playoffs, Andersen finally earned a more stable no. 1 spot.

The 6-foot-3, 236-pound goalie has a head (and beard) of red hair that is buried beneath his whimsical mask, which depicts, among other things, an old-school Mighty Ducks logo, a statue of the Little Mermaid, and a Lego character building a Lego wall. The latter two touches are a nod to his native land of Denmark, where both Hans Christian Andersen and the iconic toy blocks originated. It’s also the home country to audio company Bang & Olufsen; according to ESPN.com’s Scott Burnside, earlier this year Andersen gifted his teammates and team employees with the fancypants products to thank them for their role in his season.

With Andersen in net on one end and guys like Corey Perry, Patrick Maroon, and Ryan Kesler clogging the space in front of Crawford’s goal on the other, the Ducks have slowly worn down the high-flying Blackhawks. Many Chicago fans raged at Blackhawks coach Joel Quenneville’s decision to sit forwards Teuvo Teravainen and Antoine Vermette for Game 3 in favor of Versteeg and Joakim Nordstrom; Quenneville cited the need for “fresh legs” after the triple-OT thriller a couple of nights before.

But there has been no such rest for the weary on the shallow Chicago defensive corps: Two nights after playing nearly 50 minutes in Game 2, Duncan Keith was back with more than 28 minutes on ice, and Brent Seabrook had similar numbers.

With the pivotal Game 4 coming up at the United Center on Saturday night, it’s probable that Andersen will be facing a furious and desperate Chicago offense — a scary prospect, considering the offensive firepower stacked up on that team. Whether he caps off the game listening to some celebratory beats on those Danish headphones — or beating up on that poor goalie stick — remains to be seen.

Which Old Guy Without a Stanley Cup Should You Be Rooting For?

What Should NBA Players Bring to Postgame Press Conferences Instead of Kids?