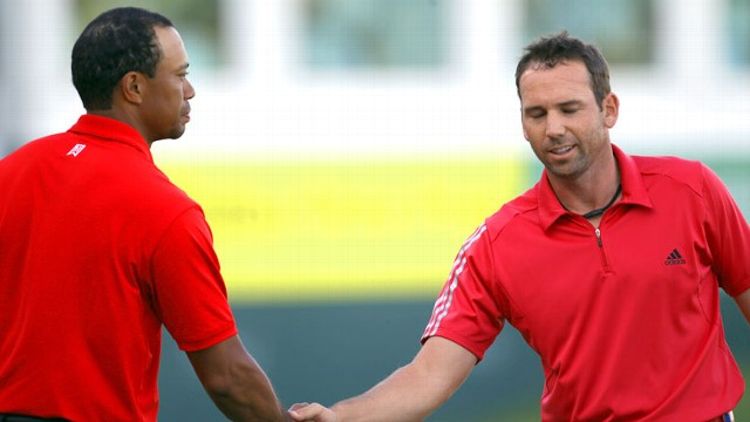 On Tuesday, golfer Sergio Garcia made a comment about inviting Tiger Woods over to serve him fried chicken. Woods responded the following day, via Twitter, noting that the comment “wasn’t silly” and was “wrong, hurtful and clearly inappropriate …” The story instantly became newsworthy, with much of the response coming down harshly on Garcia.

Grantland staff writers Wesley Morris and Rembert Browne spent Wednesday e-mailing back and forth about the incident, and then some.

Wesley: What did you think about the fried chicken remark?

Rem: I’ve been sitting with it all morning. The Sergio comment doesn’t even make me mad or rile me up. Maybe it’s me becoming numb to really, really tired insults. You?

Wesley: For one thing, is fried chicken something you have to say you even like in defense of anything? It’s fried chicken. I will say that I do not eat watermelon in public. That, I think, is still loaded. There is no fried chicken iconography the way there is with watermelon. Also, Sergio Garcia is Spanish. It’s like he got that insult out of 1969’s How to Insult the Colored Race manual. As for the comment itself, ZZZZ. But it does give Tiger another opportunity to have to shift back the stance of an aggrieved black person. He’s like, “Hello …”

Rembert: At this point in my life, if someone who doesn’t like me makes a comment about serving me fried chicken, my gut reaction is “Really? That’s all you’ve got? You went out of your way to pick a fight and try to get under my skin, and you went with ‘fried chicken’? Word?”

Saying “I’m disappointed in Sergio’s lazy insult” obviously is slightly in jest and mocking his very existence, but when I read his comment, it doesn’t scream real racism to me. It simply sounds like a comment from a man who really, REALLY doesn’t like Tiger Woods and will try to undermine him however he can.

As for Tiger, I think he should continue to treat Sergio the same way Kanye has treated Ray J and pretend he doesn’t exist.

Wesley: It’s also funny because THIS IS GOLF.

And yeah, it’s worth mentioning how boring racism has gotten yet how comically persistent it remains. There’s something in here and nothing at the same time.

Regarding Sergio, you’re right. It’s like he’s got a hate-crush on someone who doesn’t know he exists, and it’s killing him. Not real racism at all. Just a dude saying to another dude: Don’t pretend you can’t feel this knife in your back. I’m twisting it really hard.

Rembert: But it’s one of those trick knives with the disappearing blades that you get from Party City.

Seeing that this isn’t the first time someone in the golf community has come at Tiger (Fuzzy Zoeller in ’97; Tiger’s former caddie Steve Williams, who said “It was my aim to shove it right up that black asshole”), do you think it’s all just a game to get Tiger to snap? A mind game, delivered by way of things semiracist or simply racial?

Related: Do you want Tiger to ever push back? While his tweets today, for him, were revolutionary, I wouldn’t exactly call it fighting fire with fire. Personally, in the same way that every now and then I want Barack to throw vitriol at peers who call him horribly offensive things, even if it’s to the slight detriment of his cool and his career, I’ve always wanted Tiger to do the same. Even though I know neither of them should.

Also, Wesley, I think you should eat watermelon in public. It’s time. I started doing it again about two years ago. You know why? I felt as if the buildup to see if I was going to partake in said delicious watermelon was more of an elephant in the room than the actual consumption.

DON’T BRING IT TO A PARTY, THOUGH. NEVER. NEVER EVER.

We’re not there yet.

Wesley: I think Tiger should just keep going. The problem with being that famous and, in the eyes of most of America, that black, is that there are people waiting for you to snap, and why snap over a guy whose fried chicken comment confirms that he’s already snapped? Tiger wins this one. He knows he needs to save the AYFKM for a truly special occasion. The thing about racism (or sexism or homophobia) is that there’s a certain brand that people who’ve experienced it know is benign but that people who’ve never experienced it go crazy over. These people tend to be your white friends who can’t believe that, say, the fried chicken comment is really real. They’re the ones who suddenly turn into Medgar Evers on your behalf. It’s simultaneously endearing, exasperating, and totally understandable. If the president held a press conference for all the different groups that aim at him and his family he wouldn’t have time to address McScandals. For both, he’s got a white friend to get mad on his behalf.

Also, I can’t do the watermelon. I just can’t and it’s for the exact reason that you say you can. Eating one in mixed company becomes the elephant pooping in the room. You can’t prove that people expect you to eat some if you don’t eat any. But you can prove that people can’t believe you are if you do. I feel like being caught eating a watermelon in 2013 would be like seeing a unicorn for some people. And for some other people, I’d be the Jackie Robinson of cookouts. That’s a lot of pressure. Of course, whenever there is a watermelon at someone’s house, and it’s offered and I decline, I feel silly, not because I actually want to eat it but because saying “I don’t like watermelon” sounds like a lie. “I don’t like the seeds” makes it sound like you’re a snob. And “because I won’t give you guys the satisfaction” just leads to you being sent home early. So I just pretend I didn’t know there was a watermelon and immediately find something else to do. Occasionally, when this has come up and I’ve actually answered, “I just don’t like eating watermelon because it’s a weird thing for me to do in front of you,” the response tends to be, “OK … your loss.”

Who said we weren’t neurotic?

By the way, I think the gist of at least some of this conversation is that we need more black friends.

We’ll have to agree to disagree about the watermelon (actually, it’s less an issue of agreement and more about taking two different sides of a lose-lose battle). I don’t even know how we got this far away from Sergio Garcia and Tiger, but I like it.

I do think you bring up another good point, one that rarely gets talked about, which is the way different types of people respond. Sometimes, I’m caught completely off guard (and confused and filled with guilt) when someone white reacts with more passion to racism than me. There’s this Internet troll in our Grantland comment section who hates on my existence and refers to me only as “NEGRO” (his caps, not mine) after almost every story I write. It doesn’t hurt my feelings, because I have developed a necessary double layer of Teflon (black layer, Internet layer) about myself, but also because that Internet entity doesn’t matter. But when other commenters see him, most of whom are white, they just lay into him. And are disgusted by him. And fight fire with fire, kind of the way I was suggesting Tiger do with Sergio. (Wait, does that make me the Tiger Woods of the Grantland comment section?)

The point is, there’s still something odd about being defended by white folk when you don’t feel the need to defend yourself. And, on a macro level, just spending a day on social media, that’s often been the way the Sergio example has been handled. Many whites in the media are going after Sergio, while many blacks are resorting to the “let it roll off” strategy and mocking the situation (see this Jemele Hill tweet and this Michael Smith tweet about loving chicken).

No one is behaving poorly. Or acting out of line. Or being disrespectful. It’s just interesting. And while I’m not 100 percent sure what it all means, it probably harks back to two schools of thought: not wanting to be thought of as a racist (white) and not wanting to be an “angry black” (black).

(Wesley, reading over that, I totally just reverted back to black vs. white, even in an issue that started with a Spanish guy dissing a half-black, half-Asian golfer. Oops. It happens. Will try harder next time.)

Wesley: This week in racism.

I just don’t think there’s anything constructive Tiger can do except watch as Sergio implodes in the last two rounds of a tournament. Plus: This story died the minute he apologized. It was so desperate that I think even Tiger’s embarrassed for him. As for who’s tying Garcia to the lashing post and who’s just saying “I love me some chicken,” it’s interesting for a sportswriter to fan the flames of this feud, while maybe offering a European golfer a lesson in the no-nos of American tolerance. But I just think that anybody who knows how to use “fried chicken” that way also knows he’s not supposed to. I’m actually more curious about the reaction if two other equivalent incidents had taken place. What if Sergio had opted to insult Tiger’s Asianness and said he was looking forward to rapprochement over a bowl of fried rice? Would that be as loaded? Also: What if the scenario and pettiness dynamic were reversed and it was Tiger who mentioned healing the rift over a taco? What is the conversation there? I think the reason columnists and commenters react so swiftly and so strongly to racism toward black people is that that’s a familiar sort of racism and insult to the average white person, who wants to make clear both that it’s wrong and that they’re not all that way, just as Muslims often do when one or two or five guys do something stupid. We’re all really sensitive about this shit.

I could have spent my entire review of Baz Luhrmann’s The Great Gatsby talking about all the minstrelsy he embeds, but I honestly thought there were so many more interesting problems. And I don’t think the movie is racist, in the same way we agree that Sergio isn’t a racist. In Luhrmann’s case, the jazzbos and parties and brown people of the Valley of Ashes just seem like they’re having a good time for Luhrmann, who I suspect wanted to bring more non-white people into the central action but, for whatever reason, had to settle for browning the movie through performance (the guy with the trumpet, Jay-Z’s music supervision) without realizing the loaded history of using non-white characters as entertainment garnish. Sometimes you just have to pretend that that car with those happy bougie people was driving to a different movie — one that, sigh, will never get made whether it’s 1922 or 2013. But I choose not to explore that, either. I’m saving it for a different movie.