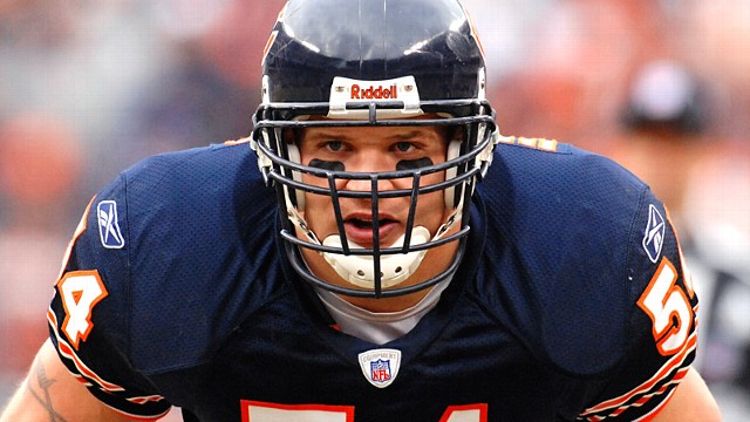 My favorite Brian Urlacher story is barely about Brian Urlacher. Two days before the Bears played the Colts in Super Bowl XLI, I was standing in a Greyhound station in St. Louis, trying to make out a muffled announcement coming over the loudspeaker. Champaign, track 1 is what it sounded like Charlie Brown’s teacher was saying, and since that’s where I was headed, I picked up my bag and made my way to the door. No one followed; that should’ve been the first sign.

My girlfriend at the time went to a different school, and because I was a college freshman without a car, I’d gotten quite familiar with the Greyhound route between mid-Missouri and central Illinois. Normally, any announcement sent half the station scurrying, but there I was, walking outside alone. I got to the door and asked the driver if the bus was going to Champaign. He said it was, and on I walked.

The seats were mostly empty, save for about two dozen men, all in gray sweat suits. This was not my bus.

I stayed on, partly because I didn’t know how to leave and partly because personal space on a Greyhound is rare. A few minutes into the ride, I pulled out my laptop and started doing a bit of work. Almost immediately, I heard a shout from a couple rows back: “Is that a Brian Urlacher movie?”

I turned around. “No, that’s just my background,” I said.

“I do have highlights from every game this year, though, if you wanted to watch.”

Within 30 seconds, there was a group of 10 crowded behind my row, and starting with the Week 1 win over Green Bay, we spent the next two hours reliving the Bears’ run to the Super Bowl.

When I heard the news of Brian Urlacher’s retirement yesterday, that day was the first thing that came to mind. In Chicago, there’s the Bears, and there’s everything else. And for 13 years, Brian Urlacher was the Bears.

Many of the reactions in the past 24 hours have fallen into two categories — where Urlacher belongs in football history and where Urlacher belongs in Bears history. Typically, I love that first conversation. Who gets into the Hall of Fame matters to me more than it should, and legacies matter just as much. Maybe it’s my familiarity, but I think Urlacher’s legacy is pretty obvious. He’s the second-best inside linebacker of his generation (behind Ray Lewis but ahead of Zach Thomas), and probably the third-best linebacker overall. (I’d give the no. 2 spot to Derrick Brooks.) As Matt Bowen wrote yesterday, Urlacher’s influences on his position and weekly offensive game plans are difficult to overstate. Urlacher should and probably will be in Canton five years from now, right next to Lewis. No matter what Ernie Accorsi says.

Where he ranks among Bears is similar. Urlacher probably belongs behind Butkus and Singletary on the list of modern-era Chicago linebackers, but that he’s earned their company is just as important as where he falls in the order. As team chairman CEO George McCaskey said in a statement, “In the pantheon of Bears, Brian has earned his place alongside Halas, Grange, Nagurski, Ditka, Payton — and yes, Bill George, Butkus and Singletary.”

To Bears fans who grew up when I did, though, considerations of Urlacher’s career tend to be about what he’s meant only in the scope of the past decade and a half. In evaluating that, I’m probably an odd source. Brian Urlacher was never my favorite Chicago Bear. When he arrived in 2000, his ascension to franchise icon seemed almost immediate. The Bears’ defense had lacked an identity for so long that the moment we realized Urlacher was the next Monster, his DNA and the Bears’ became intertwined. There was very little time in Chicago between when liking Brian Urlacher would’ve been cool and when liking Brian Urlacher would’ve been akin to liking deep-dish pizza. A favorable regard for Urlacher was an inherent part of Bears fandom. It was true by definition and really, said nothing about you. So instead, while Urlacher filled his role as the post-Jordan face of Chicago sports with quiet greatness, I talked about Tommie Harris and Lance Briggs, and later, Julius Peppers.

Here’s the thing, though: I don’t remember many Lance Briggs moments (fourth-and-1, fourth-quarter stop against Seattle in the ’07 playoffs aside), but with Urlacher, there are plenty.

The Bears played the Falcons three times during the Michael Vick era, and each time, an abhorrent Vick performance fueled a Chicago win. From 2001 on, Urlacher seemed to take every game against Vick as a league-instituted challenge conceived just for him and spent each game tormenting him from sideline to sideline, line of scrimmage to 30 yards deep. When Atlanta came to town for a Sunday-night game in 2005, it was below freezing, and I can still remember seeing Urlacher’s breath puffing from his face mask. Vick went 13-for-32, and Atlanta gained just 231 yards. The Bears would go the Super Bowl a year later, but I’ve long held that the 2005 defense was the best one since 1985. That also happened to be the year Urlacher was named Defensive Player of the Year.

My favorite game is probably everyone’s favorite — the Bears’ Monday Night win over Arizona in 2006. Denny Green and Devin Hester are the first names that come to mind there, but it was Urlacher’s night. He had 25 tackles, a career high, and I can still picture every detail of him stripping Edgerrin James for the Bears’ second defensive touchdown of the half.

When I think about the lasting image of Urlacher’s time in Chicago, though, it will be this one — snow falling, NFC Championship trophy in hand, the Bears’ current legend returning them to where the others had gone. It’s impossible to separate Urlacher from the best moment in recent Bears history because he is recent Bears history, his status as a legend so wholly realized that it was easy to forget.