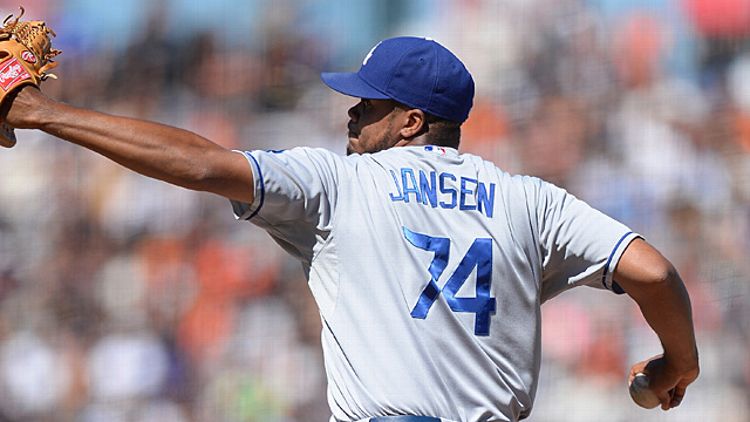 Here’s what you probably know about Kenley Jansen: He’s a pretty good pitcher.

Here’s what you might not have known about Kenley Jansen: He came up through the minor leagues as a catcher. He also completed a hidden perfect game last week, setting down exactly 27 batters in a row over 10 appearances from July 23 to August 8.

Both of those tidbits are interesting, if not entirely unique. The hidden perfect game is rare enough, but nowhere near as rare as retiring 27 consecutive batters in a single game. And major league teams have been converting position player washouts into one-pitch relievers for ages. Troy Percival and Jason Motte both used to be catchers, and it’s becoming a more common practice as time goes on.

Jansen caught for four years and change in the minor leagues, culminating in a starting gig for the Dutch national team in the 2009 World Baseball Classic. After the Classic, he would catch only 34 more games as a pro, developing a hellacious cut fastball and making the big leagues 51 weeks after he threw his first professional pitch.

At 6-foot-5 and 255 pounds, Jansen would have been the biggest catcher in the major leagues — Matt Wieters, Joe Mauer, and Erik Kratz all have similar measurements, but as a rule, catchers that size tend to get moved elsewhere, and with a .229/.310/.337 career slash line (most of it below Double-A), Jansen’s bat wouldn’t play at, say, first base. Given that Jansen’s greatest strength as a catcher was his arm, it made sense to move him to the mound.

He was 21 years and 10 months old when he pitched for the first time. By the time Clayton Kershaw was that age, he’d thrown almost half as many major league innings as Jansen has now. As the closer for a West Coast team, Jansen tends to play late at night. The combination of having to work in the morning and Vin Scully’s comforting, grandfatherly voice means that even East Coast fans with MLB.TV might doze off before he enters a game, so he doesn’t get the press of Aroldis Chapman or Craig Kimbrel, let alone Mariano Rivera.

If you are one of these heavy-lidded East Coasters, it might surprise you to learn that among relievers this season, only Chapman, Kimbrel, Jason Grilli, and Greg Holland have a higher percentage of strikeouts per batters faced. In 2011, Jansen struck out 16.1 batters per nine innings, the second-highest percentage of all time, and one of only five seasons of 15 or more K/9 in history. This season, his K/9 rate is a hair under 13, the lowest of his career. But it’s OK, because he’s striking out more than nine batters for every batter he walks. Go look up his highlights on MLB.com and you’ll find something interesting: Almost every single video is titled with some variation of “shut the door.”

So how does this one-pitch neophyte become the human embodiment of the Season 3 finale of Mad Men?

He doesn’t throw hard — his average cutter velocity is 93 mph, which is fast but not extraordinarily so. He throws that cutter almost 95 percent of the time, so he doesn’t keep batters guessing. So what about Jansen’s cutter makes it so effective?

It’s hard to tell where Jansen’s power comes from in his delivery — he doesn’t stretch and explode like Chapman or muscle the ball out there like Jose Fernandez. He looks like the overage kid on the Little League team, not only because he gets so many strikeouts, but because he’s got a big, awkward-looking body.

But look at the sideways movement on that pitch. It’s like a Ping-Pong shot; like something out of one of those old baseball video games where you could hit the left and right arrows to make the ball break in either direction in midflight.

Engineering professors ought to show film of Jansen’s cutter to demonstrate the effects of drag and friction. If you were playing Wiffle ball and some dude threw that pitch, you would not invite him back. Jansen’s cutter is so good that he’s been throwing it for four years and nobody’s figured out how to hit it, even when they know it’s coming.

He’s not obviously the best relief pitcher in MLB — Kimbrel, Holland, Chapman, and Koji Uehara are having seasons at least comparable to Jansen’s, and all except Holland have a track record of similar length. Neither is he the primary reason for the resurgence of a Dodgers team that features Kershaw, Yasiel Puig, Adrian Gonzalez, Hanley Ramirez, and so on.

But Kenley Jansen is pretty damn awesome. And if you didn’t know that already, you should.