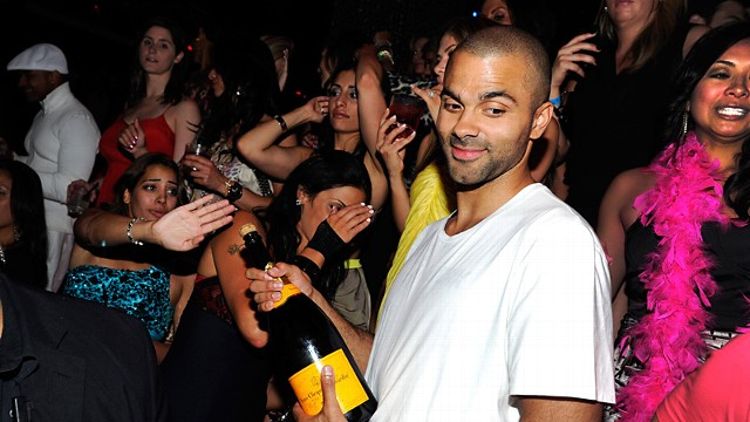 Tony Parker’s Nueve Lounge opened about 15 months ago. Late last week, a very abrupt post appeared on its Facebook page, indicating that Nueve Lounge had closed its doors. Nueve was open the preceding Saturday night, but only a few days later Suite 1101 in the Boardwalk shopping center is vacant, with only a few references to the number nine hanging on various walls.

So the Spurs point guard becomes another professional athlete with a failed business venture. Whether the business was actually failing isn’t certain, but the remnants of another athlete exploiting their celebrity to generate local commerce are all over this one. Nueve was one of many “strip mall” clubs that populate San Antonio’s suburban sprawl. These bars are meant to attract a wealthy clientele who drive a short distance from their McMansion-filled gated communities to dump their money into strip mall clubs that appear to have been designed by the same contractor that did their ugly master bathroom. Nueve was “perfectly” positioned at the outskirts of San Antonio across from the city’s glorified gated community, The Dominion.

The club opened in March 2012 with the goal of bringing a New York or Las Vegas lounge vibe to suburban San Antonio. But the club never asserted itself as the premier ultra-luxury VIP spot for popping bottles in San Antonio. To get a better feel for the inherent bleakness of a suburban strip mall club in San Antonio, watch this segment that features the predictable small market adoration of a local celebrity.

At the end of the clip, Tony’s brother Pierre is asked to pitch the club to interested viewers. He simply insists that this place is “the spot,” pretty indicative of his hyper-personalized business and marketing strategy. Tony, wearing a ridiculous jacket and scarf, seems to be a team player at the beginning of this business venture.

We’ll never see the club’s financial statements to know if it was actually bleeding cash, but there were certainly a few telltale signs that the club was doomed.

Building a ‘Luxury Brand’ in a Generic Shopping Center

A strip mall is a great place to set up your blossoming insurance office. If you are attempting to launch an “upscale” or “luxury” brand, it probably should not share real estate with a Subway, DoubleDave’s Pizzaworks, or an acupuncturist practice. When everything is bigger and cheaper in Texas, selling “luxury” can be difficult.

Exploiting your international flair as a representation of “upscale” might seem like a good idea at first. But it ultimately comes across as arrogance. Even worse is exploiting your own fame as the primary draw of a club. In this promotional video for a New Year’s Eve party, the opportunity to come gawk at a Spurs player seems to be the main draw.

Opening a Club Because You Want to Hang Out There

Famous people and their entourage often make the mistake of thinking they are in touch with humanity’s universal needs, while they are actually the most selfish, out-of-touch people in the world with nothing but horrible ideas. Sure, there might be an uncovered niche of nightlife in your non-major market, but issues like transportation, drunk driving laws, and availability of cab and chauffeur culture can make it difficult to open a popular nightclub on the edge of a city. Just because the crew wanted a place to hang without the pitfalls of having to pay someone else for their bottles doesn’t mean you should actually open a club.

Even during the Finals, Nueve was described as a place where “regular people came to watch the game.” It looks like it turned into a bleak place where people thought Tony Parker would eventually show up. Instead of investing more than $40,000 in improvements to a sound system, and sinking even more cash into custom elements at your club, how about just making a nice parlor in the comfort of your own home? For example, a modest dance floor or stripper pole installation would be a better investment.

Hiring Family or Friends to ‘Manage’ the Venture

According to early coverage, Tony’s brothers, Pierre and TJ, were on board to manage the Nueve Lounge. More specifically, TJ was the general manager and Pierre functioned as the VIP manager. While I’m not totally familiar with the nightclub and lounge business, “VIP manager” seems like an unnecessary position at a strip mall club on the outskirts of San Antonio.

Apparently, Tony wanted to allow Pierre to retire from playing basketball overseas and be close to family. As opposed to just giving him a room in their house to crash while he finds a new career. In radio ads for Nueve, patrons were encouraged to call Pierre for bottle service. Nueve was probably a relatively low-risk, low-reward investment for Tony Parker. However, at some point athletes need to be able to say no to their family and friends.

This flyer for the promotion of TJ’s bash says it all.

Bars, lounges, or whatever you want to call your box that serves alcohol is more than likely going to fail. Even if it is successful initially, it will likely become a passing trend by the end of your next lease. Restaurants, car washes, and nightclubs are all terrible ideas for just about any entrepreneur, particularly an athlete whose primary job requires them to dedicate their time and energy to getting better at their sport. Whether the goal was to give his brother a career, establish a groupie farming system, or just ceasing to break a lifelong trend of enabling, Spurs fans can only hope that Tony Parker got out of this one without putting a significant amount of capital into it.

A bar or club can be a chill place to hang out, escaping from all your problems by paying for an excess amount of drinks. At age 31, divorced, and coming off a traumatic loss in the NBA Finals, Parker is at a different place in his life than when the club launched. As a Spurs fan, I’m glad this club only lasted as long as it did. The possibility of Pierre coaxing Tony into doing an appearance to promote “$1 Miller Lite Night” on the eve of a playoff game would have haunted me for as long as Nueve’s doors were open. Fortunately, that’s over now.

All we have left is this picture of a Ferrari with a custom license plate parked in a strip mall.