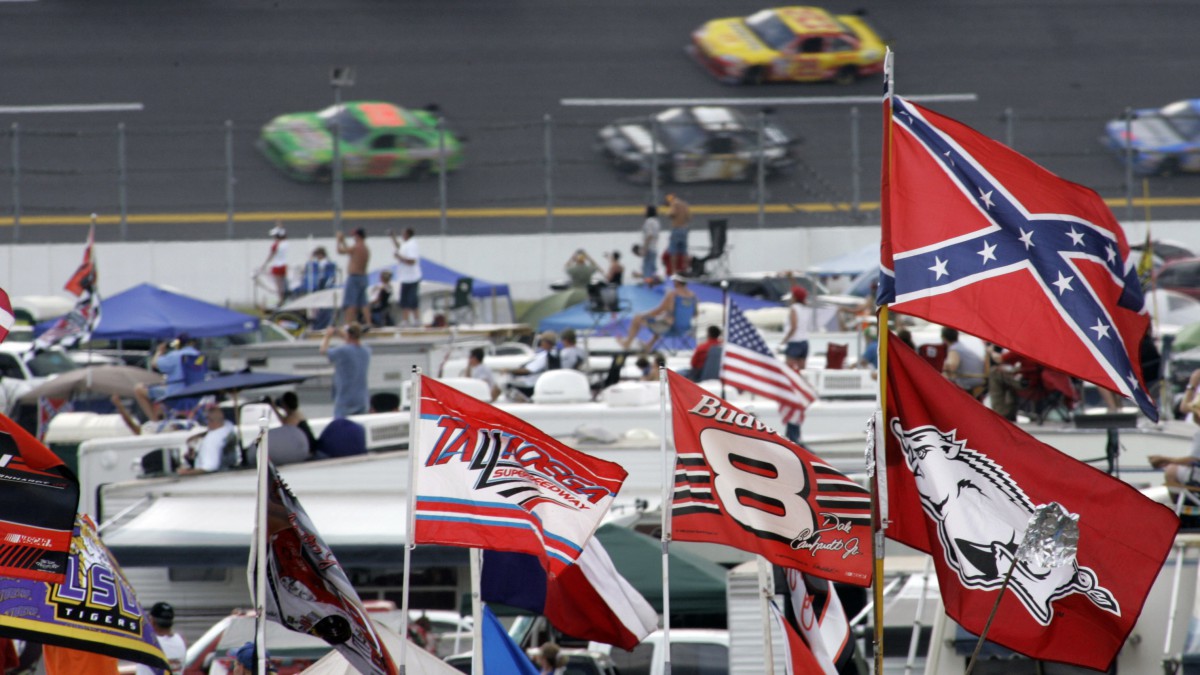 In August 1965, two powerful men in the state of Alabama met face-to-face for the first time. The first was George Corley Wallace, the bulldog-faced governor who had famously stood in the doorway at the University of Alabama in a vain attempt to keep the school segregated in 1963. The other one was Bill France Sr., the Washington, D.C., native responsible for bulldogging the wild kingdom of stock-car racing into the money machine that would come to be known as NASCAR. France was building what he called a “super-speedway” in Talladega, and Wallace promised to do everything he could to make that project succeed — including accelerating the construction of Interstate 20, the major highway leading to the track. Three years later, Wallace first ran for president with France Sr. as a prominent backer. A backlash was rising against the achievements of the civil rights movement and Wallace, with his wolverine’s instinct, sensed that in many ways the entire country was Southern. (On the Republican side, Richard Nixon saw it, too, concocting his “Southern Strategy,” which realigned the country in a fashion that persists to this day.) France was a prominent backer of the governor’s run, raising money and telling an interviewer, “George Washington founded this country, and George Wallace will save it.” And thus the political power still present in the aftermath of American apartheid found some expression in the rise of Bill France’s NASCAR. They were inseparable.

So it was more than simply window dressing last week when Brian France, the current NASCAR CEO and the grandson of Bill France Sr., responding to a national revulsion regarding the Confederate battle flag occasioned by the massacre of nine people in a South Carolina church by a white supremacist, announced that the flag would no longer be welcome at NASCAR events. Even more than the decision by Walmart to discontinue sales of related merchandise, and even more than the call by South Carolina governor Nikki Haley to remove the banner from the state capitol grounds, France’s move struck deeply not only into the culture that had produced reverence for the emblem of sedition, but also at NASCAR itself. And France was not shy about saying why.

We want to go as far as we can to eliminate the presence of that flag … I personally find it an offensive symbol, so there is no daylight how we feel about it and our sensitivity to others who feel the same way. We’re working with the industry to see how far we can go to get that flag to be disassociated entirely from our events.

This is not going to be an easy task. It’s simple enough for NASCAR to police itself in this regard, but the flag can be almost omnipresent in the infield at most of France’s racetracks and atop the vast flocks of recreational vehicles that travel from event to event, like elements of an army. But France promised that he was not going to relent. “If there’s more we can do to disassociate ourselves with that flag at our events than we’ve already done, then we want to do it,” he said. “We are going to be as aggressive as we can.” France’s position was reinforced last weekend by driver Dale Earnhardt Jr., the scion of a legendary racing family that traces its participation all the way back to the original circuit, when Ralph Earnhardt was one of Bill France Sr.’s most prominent drivers. “I think it’s offensive to an entire race,” Earnhardt said. “It belongs in the history books and that’s about it.”

It is easy to say that when the Confederate battle flag has lost NASCAR, it has lost whatever little constituency it had in the culture at large. But the events of the past two weeks have given rise to something people have said they wanted for decades — a return among elite athletes to the kind of public social and political commitment associated with athletes like Muhammad Ali, Arthur Ashe, and Billie Jean King. This time, it’s occurring at the accelerated pace of 21st-century communications. And it’s occurring when the notion of corporate branding has overwhelmed the presentation and sponsorship of the games themselves. It’s going to be fascinating to watch these two disparate dynamics collide with each other. Be careful what you wish for. Something inevitably has to give.

In just the past couple of years, we have seen athletes come out as gay and be celebrated by their peers. We have seen athletes stand up against “religious liberty” laws in places like Indiana, and we’ve seen even the NCAA come out against such anti-gay laws. We have seen the Miami Heat wear hoodies in support of the slain Trayvon Martin, and other NBA stars, including LeBron James, donning T-shirts reading, “I Can’t Breathe,” the dying words of Eric Garner as he was succumbing to a choke hold by members of the New York Police Department. James and others also were outspoken in the wake of a grand jury’s decision not to indict Officer Darren Wilson in the shooting of Michael Brown in Ferguson, Missouri. Carmelo Anthony marched in his native Baltimore to protest the killing of Freddie Gray by that city’s police. This is all a long way from Michael Jordan’s (perhaps apocryphal) assertion that “Republicans buy shoes, too.”

During the long period between Ali and Black Lives Matter, there was no shortage of prominent athletes speaking out on their conservative politics, up to and including the election of people like former Seattle wide receiver Steve Largent to Congress, and the reluctance of members of the Ryder Cup team to meet with President Clinton in 1993. That was a long stretch of boats unrocked. Now, though, we are living with a generation of athletes who have grown up as the children of social media, of Facebook and Twitter, Instagram and Snapchat and whatever-the-hell-comes-after. They communicate directly with the world and directly with each other. Informal networks have sprouted up within the leagues and within teams. Events are discussed. Opinions are exchanged. Movements are formed. And, all of a sudden, athletes are wearing black hoodies to mourn a young boy stalked for carrying snack food in the wrong place and shot to death. And, all of a sudden, stock-car racing officials are mortified that a flag of sedition has become one of their sport’s informal trademarks.

To be sure, a lot of the momentum against the flag comes from the fact that corporate leviathans like Walmart and Amazon joined in the battle against it — just as it was the involvement of business interests that gave the movement against the Indiana “religious liberty” law the final push toward repeal. And there is the great conundrum going forward. Sooner or later, some issue is not going to be as clear-cut as a dead child or a racist emblem. Sooner or later, the issue is not going to be joined over something as easily understood as nine people slaughtered by a terrorist in the middle of Wednesday-night Bible study. Sooner or later, some athletes are going to involve themselves in an issue that gets them crossways with the major multinationals who own their teams and finance their leagues. And when this happens, we will see who really are the winter soldiers among the fans and the media.

For decades, columnists and fans have waxed nostalgic over the days of the Committed Athlete, a nostalgia that blinds them to the kind of hate mail that was sent to Ashe and the fact that the entire weight of the U.S. government was brought to bear against Ali. This nostalgia also blinds them to the memory that more than a few people in this country wanted Ali in Leavenworth for his stand against the Vietnam War. So when the next issue, whatever it may be, rises, and some famous athlete takes a stand that is unpopular with his fans, and his team, and his league, and all the corporate partners, it’s going to be interesting to see what happens to that athlete. It’s going to be interesting to see what happens with us. But, for now, NASCAR has settled matters on the banner of treason once and for all. They should throw a parade at Appomattox.

The Sun Never Sets: On Roger Federer, Endings, and Wimbledon