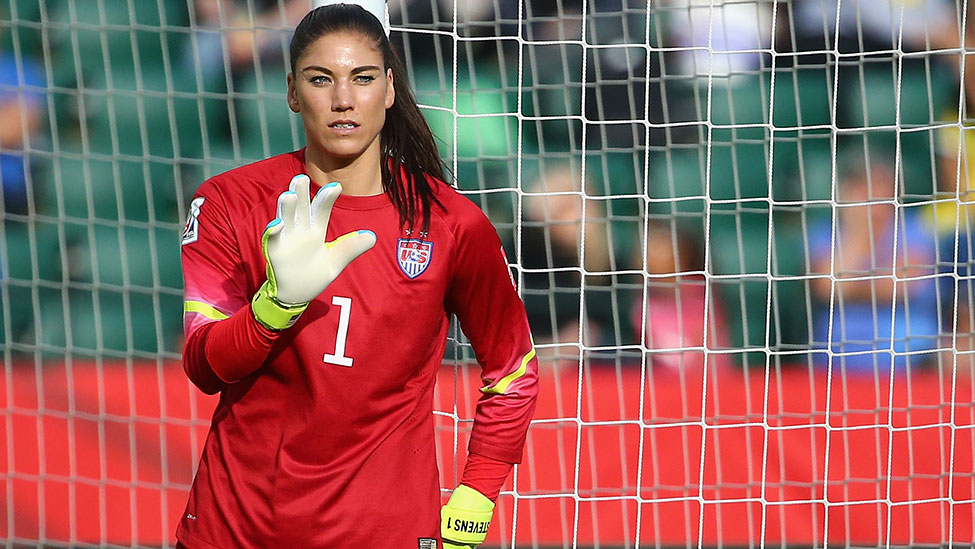 After a news-filled lead-up to the World Cup, Hope Solo hasn’t had much to do during the last four matches. She didn’t make a save against Sweden, then made just two in each of the games against Nigeria, Colombia, and China. That’s about one save an hour, which means she’d need to play for more than half a day to match the numbers put up by Tim Howard against Belgium last June. Howard became the Secretary of Defense because his goalmouth was besieged; in Canada, Solo has been a general back at base, overseeing and helping to position the troops but mostly staying out of harm’s way.

Such is life for the starting keeper on a world-class team like the U.S. women: You spend a lot of time just hanging out — in the match but not of the match. You don’t get to make 16 saves, let two in, and become a hero; you’re supposed to make two saves and keep the score sheet blank. With 175 caps and 88 shutouts in her national team career, Solo does this as well as anyone in the world. On the rare occasion the very solid American defense has allowed a shot on goal over the last four games, Solo has been there to say “no.”

When the U.S. needed her most — during the shaky opening minutes of the first game against Australia — Solo was also at her best. In the fifth minute, she tipped Emily Van Egmond’s blast onto the crossbar, keeping the Americans level despite a rough start. Less than 10 minutes later, with the U.S. up 1-0 thanks to Megan Rapinoe’s deflected shot, Solo dove low and to her left to rob Emily van Egmond’s point-blank attempt, a save that Landon Donovan said was as good as you’ll ever see.1

By the time Lisa de Vanna beat Solo in the 27th minute to tie the game up, it could easily have already been 3-1 Australia. But Solo’s heroics kept the Americans in the game and allowed them to regroup and regain control in the second half. “Hope Solo was freaking huge,” Rapinoe told Fox Sports after the game. “I think she had three saves that I don’t think anybody else in the world can make.” That’s the benefit of having the best goalkeeper in the world on your side. Even on the rare occasion that the U.S. gets totally outplayed, Solo still gives them a chance.

Expect tomorrow’s semifinal match against Germany to look more like the first half against Australia than the past four games. As the U.S. takes on the top-ranked team in the world, Solo will not be a bystander, and for the first time in Canada, the U.S. won’t be favored. The Germans, looking to match the feat their male counterparts accomplished in Brazil last summer, might not have deserved to beat France in the quarterfinal — cue Gary Lineker — but they did, and so here we are. Led by Celia Sasic’s six goals and Anja Mittag’s five goals and two assists, they have a tournament-leading 20 goals and 134 shots, powered by an unrelenting forward drive that wears teams down.

Plus, German coach Silvia Neid also has her own Hope Solo in Nadine Angerer. The 36-year-old netminder took over first-choice duties before the 2007 World Cup, which Germany won due in part to Angerer’s penalty save on Marta in the final, and she hasn’t relinquished the position since.2 “We all know what she’s capable of. She gives you that little bit of extra confidence,” German midfielder Dzsenifer Marozsan told FIFA.com moments after her keeper saved Claire Lavogez’s penalty to put Germany through to the semifinal. Angerer, who won the FIFA World Player of the Year award in 2013, hasn’t been a wall, conceding three goals in five games and making just nine saves, but she made the one big stop her team has needed thus far.

The talk before tomorrow’s game will likely focus on each team’s attack: Will Abby Wambach start? And will Marozsan, Germany’s midfield general, recover from a left ankle injury in time to take the field? But here’s the truth: When Angerer and Solo play, there’s almost never anyone better on the field — although they’re rarely forced to demonstrate that fact. To beat the Americans and a frontline that’s still working out the kinks, Angerer might not have to do so. But if the U.S. plans to upset Germany, Solo probably will.