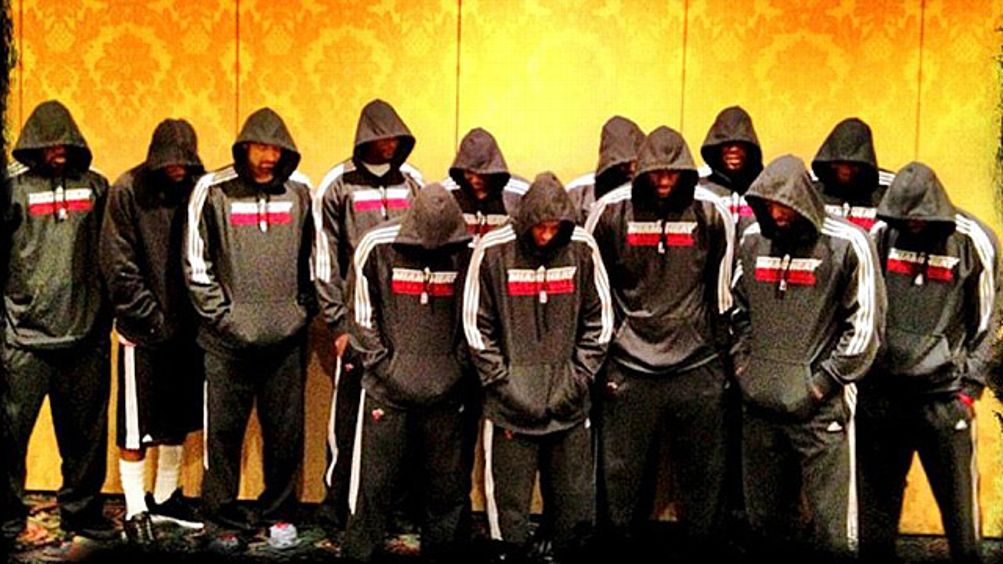 It couldn’t have just been you or me or the Magic. It had to be the Heat. Not simply because the Heat play in Miami, the home of Trayvon Martin, who was killed in late February after leaving a 7-Eleven, in Sanford, Florida, with a can of iced tea and a bag of Skittles. Not simply because LeBron James and Dwyane Wade understand the meaning of statement clothes. But because, suddenly, the Heat understand the power of statements. A team whose dominance in the last two seasons stems from one of the tackiest, most egotistical events in the history of sports media had now devised one of the classiest, most egoless.

Martin, as the world now knows, was 17 and wearing a hoodie. He triggered the suspicion of the gunman, George Zimmerman, a neighborhood watch coordinator who, in defiance of police orders, followed Martin for several blocks and shot him. It wasn’t the Twinkie defense, but the Sanford Police Department has largely left Zimmerman alone because, as part of the so-called “Stand Your Ground” self-defense law, the law in Florida appears to be on his side.

Nonetheless, President Obama risked partisan eye-rolling and spoke with empathy about the incident. Sinead O’Connor, the author of the song “Black Boys on Mopeds,” posted a heavily forwarded entry on a blog. Charles M. Blow devoted a recent column in the New York Times to the searing significance of the killing. And Martin’s parents went to Congress in support of protest but urging peace.

The Miami Heat didn’t say anything. They put on pullover sweatshirts whose hoods concealed their faces, stood somewhere in a Michigan hotel, and posed for a picture that James posted on Twitter. It’s a devastating image. Thirteen men with brown skin and black outerwear, not looking at you. Your pulse quickens when you see it. Your heart stops. Your skin pimples — at the mournful sense of peace and containment of agitation. Your brain twists: The man who concocted the Decision also orchestrated this?

On March 23, Geraldo Rivera said he blamed the hoodie for Trayvon Martin’s death as much as he did George Zimmerman. And so the hoodie became a national symbol whose status as a menace to society needed reclaiming. People wore hoodies to church. They wore them in their Twitter photos and on their Facebook pages. New York hosted a “Million Hoodie March.”

Last Wednesday, the congressman from the South Side of Chicago, Bobby Rush (a former Black Panther), stood at a podium on the House floor, removed his suit jacket, pulled the hood of a sweatshirt over his head, and slipped on a pair of shades — all in Martin’s name. As Rush spoke of loving mercy, the speaker pro tempore, Gregg Harper, banged a gavel, cited rules on House decorum regarding hats (and, by extension, hoods), and had Rush evicted from the floor. “The member,” Harper said, “is no longer recognized.” The hoodie tends to have that effect.

That is a grain of the tragedy. The hoodie is often made from jersey, which is a lazy person’s cashmere and an athlete’s silk. Its softness is easy to exploit. If you’re going to lose yourself in a piece of clothing, let it be this. (You can imagine how different the conversation would be had Zimmerman, in his police call, complained of baggy pants instead.) The reason you see some people in jersey at the airport and at brunch instead of in something else has everything to do with the fabric’s comforting warmth and pleasing lack of structure. On the street, a hoodie can transform you. The jersey becomes armor, soft to the touch, rough in certain eyes. The hoodie is ‘hood. It’s “hoodlum.” For most black men, the only way to be perceived in a hoodie is as hard.

It’s what young white kids in leather jackets were for America in the 1950s: cause for alarm. Black leather jackets said “white” — Brando, Elvis, the Fonz. The hoodie confers blackness. Filipinos and Latinos have found street cred in it — white guys of the John Cena, Mark Wahlberg, Channing Tatum varieties, too: as toughs. The hardness can turn suspicious. France claims to have a burka problem. American schools have banned the hoodie. It’s too functional. It permits you to conceal too much — drugs, weapons, phones, yourself. To defuse one, all you have to do is pull down the hood. But for some kids, a weaponized hoodie is the only one worth wearing. This is to say it’s not an innocent garment. You see three or four or eight hoodied young black and Hispanic men at one end of the subway and you wonder if they know how “suspicious” they look.

Some of them — there’s often a girl in the mix — feed off the presumption. I’ve seen kids taunt gawkers and turn the presumption about them and stigma against them into a one-way comedy routine. It’s an ironic one, too, insofar as blacks have spent centuries nervous about white men in hoods. Other kids have to be strategic about walking while hoodied. They have to be self-conscious and a little bit paranoid. On Friday, the Boston Globe ran a story about the reverberations of Martin’s slaying at New Mission High School in Boston’s Roxbury neighborhood. One kid details how when a group walks in public, one of them makes sure they don’t seem like too much of a pack — there’s a designated staggerer.

The Heat appeared to understand the presentational aspect of the hoodie. Each man stands with his hands in his pockets, looking down the way Martin could have been. They could all be at a funeral. They could be at a particularly athletic abbey. They could be at your front door. The protest is performed, intentional. That’s apt. Everything about a hoodie on the street is deliberate. It’s warm, but you don’t always wear it to ward off the chill. That’s the thing about deliberateness: It’s the spine of style. The oversize, hood-up hoodie is a look. It can signify but doesn’t have to mean you’re in danger. It can allude to vocation without being a uniform, or to class status without necessarily being inexpensive. Not every guy in camouflage cargo pants is a Marine. Not every dude in a Garnett jersey plays for the NBA. Not every hipster in horn-rims works at the library. And not every black kid in a hoodie is trying to avoid a security camera.

For what it’s worth, the incident took place on the grounds of the gated community where Martin’s future stepmother lived with her son. Also, according to a statement from Martin’s girlfriend, who was speaking to him on his cell phone at the time of the incident, Martin “put his hoodie on” after he noticed Zimmerman following him.

Some style is about aspiration. The hoodie aspires to a particularly slanted cool. It’s a garment worn away from its criminal-concealment function. It’s just hip-hop. It’s just skate park. It’s just hot yoga. It’s fashion. Sadly, those aren’t distinctions everyone cares to make. George Zimmerman saw a black kid in a sweatshirt and panicked.

The Heat moment — and the other eruptions of hoodedness that preceded it — weren’t about fashion, per se. They were about justice. The hoodie just happens to symbolize an injustice that comprises the slain, his slayer, and more. It embodies the racism bound up in clothes. This, again, is why it had to be the Heat that riveted our attention. The hoodies, the pose, the solemnity, the unified intent, the teamness: It rhymes with Tommie Smith and John Carlos raising their gloved fists atop the medal podium at the ’68 Summer Olympics, the other great moment in sports righteousness. But Smith and Carlos’s defiant pride — in being black and in being American — is in that Heat photograph. There’s defiance, yes (those pocketed hands are so suggestive). But there’s also a subdued, modest, rueful quality about those hands. You can sense shame.

I suspect this is what the NBA had hoped to avoid when it implemented its current dress policy, which saw the players dress almost exclusively in business-casual attire. That was in 2005, and the sport was awash in bagginess and ostentation and bling. To some eyes, it was awash in tough black men, too; in stereotypes. The players were expected to look more the way the owners did: presentable. To the board, presumably, more than to the fans. Jeans, jewelry, and sweats went out. The cornrows and dreadlocks began to disappear. Since the owners were almost all white, the players mostly black, and the forbidden style decidedly urban, the league’s new code of dress felt like code — if not for racism then for contempt for a lifestyle embraced by a lot of young black men, some of whom dream of playing in the NBA.

The star players looked on the bright side. They hired stylists and began to think about (and overthink) what to wear. They donned suits and bow ties and snazzy glasses. They went to the tailor, wore their clothes tight, and accessorized. The new style felt like both a mockery of dapperness and a legitimate embrace of it. Hip-hop was already headed in this direction, away from gangsta-ism. It made sense for the NBA, too. A wealthy man should look rich.

LeBron James arrived in Miami from Cleveland’s humble, industrial climes, and he and Dwyane Wade fell in sartorial love. Together, they stood at the league’s style vanguard. They made mistakes. Still, even as a tandem fiasco they demonstrated courage. They gave us ideas. But the upscaling took a large part of the sport away from the streets where, for a generation, it had thrived. The league made a demand, and the players met it. If the Heat photo doesn’t officially reverse what the players had to forsake, it certainly evokes what they can no longer wear to work.

That’s the shame you sense. There’s an inarguable benefit to having these players dress more like adults and advertise how else a black male could dress. But the players were also complicit in allowing the league to perpetuate the stigma against a staple of youth attire. In shedding their $2,000 handbags and $900 shoes for sweatshirts worn with the hoods up, James and Wade and the rest of the team aligned themselves with the Trayvons of the world and, in a sense, against the league. The photo wasn’t taken while the team was on the clock, but it constitutes a rebellion all the same. And it spoke to the dual class and race consciousness inherent in American professional basketball. Here was a team of very well-off black men dolefully identifying with the children they’re paid to stop being. It doesn’t mean the suits are bad, but it doesn’t mean the hoodies are, either.

Standing there with their shrouded heads hung low, the Heat looked like a cultural neighborhood watch. These famous men were a pointed tribute to the power of anonymity (however momentarily they, too, weren’t recognizable) and a vision of grave solidarity that rebuked the George Zimmermans and Geraldo Riveras of the world: Kill one of us, you kill us all.